‘There is no human who can sleep in this’ 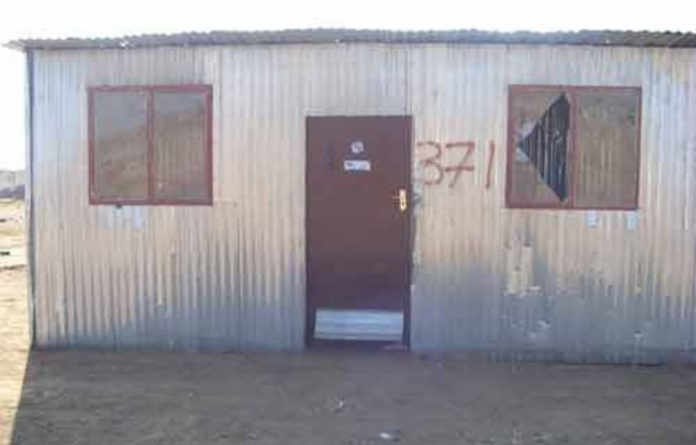 Evicted shack dwellers from the Gabon informal settlement on the East Rand have refused to occupy the 72 corrugated iron shacks built for them by the Ekurhuleni Municipality. This after they were evicted and their shacks demolished on May 11.

According to community members, “Red Ants [security guards known for the colour of their overalls] destroyed about 350 shacks on the day”.

However, only 72 evicted community members gathered outside Constitutional Hill in July to seek legal representation, since many of the other evicted residents intimidated by the police had fled the area.

According to Reghana Tulk — the lawyer representing the evicted community members — evicted residents received unaddressed notices 24 hours prior to their evictions.

While 350 people claim to have been displaced because of the shack demolitions in Gabon in May, only 72 approached the court for redress. While the Ekurhuleni Municipality was ordered to rebuild the shacks by the South Gauteng High Court in August, evicted residents say they will not occupy the shacks as they are not habitable. Watch our slideshow to hear why evicted residents say they won’t move in.

However, evicted residents that the Mail & Guardian spoke to denied receiving such notice.

Many claimed they were not home when the demolitions took place and had received no earlier warning. Many also said their belongings had either been destroyed or misplaced during the demolitions.

One resident, Moses Mahlalela, said his TV had been damaged while his generator and blankets had been stolen.

As a result, the municipality was ordered to rebuild 72 shacks of the people who sought legal recourse.

According to Reghana Tulk — the lawyer representing the evicted community members — all parties involved agreed on a show house, which was represented as a sample of the 72 units to be constructed, and became the agreed standard as to what would constitute restitution as ordered by the court on August 30.

“We agreed on single metal sheets, wooden beams in the ceiling, about 16m², two windows and a door,” Tulk told the M&G.

However, on her first inspection visit on September 6, she realised that what had been agreed upon had not been complied with.

According to Tulk, all of the 72 units did not conform with the show house, and are not stable — they have not been constructed from single metal sheets but rather from second-hand, rusted cut metal, “which has been haphazardly joined together by old and rusted bolts”.

In addition, there are no stable wooden beams holding up the roof of each unit, representing a safety concern.

Evicted residents have since refused to occupy the shacks, saying they are poorly built, incomplete and dangerous to live in. Many of these people are homeless, sleeping at the homes of neighbours, friends or family members.

‘The shacks they demolished were fine’
Pointing at a shoddily reconstructed shack on October 11, Mfanzile Msibi, chairperson of the Informal Settlement Network, was obviously unimpressed.

“The shacks were supposed to be complete, but as you can see with this one, they are incomplete; there is no door, you look at the window it’s broken, and even the roofs are leaking. Even the floor, it was supposed to be cemented, unlike the condition it is right now. The condition should have been conducive to human life, not like the one that they have built and want to accommodate people.”

“The shacks they demolished were fine. Now they have built structures fit for pigs, because there is no human who can sleep in this.”

According to the municipality, the evicted residents were residing unlawfully at the premises concerned and were evicted without a court order because the structures were half-built and did not constitute homes.

However, many evicted residents said they had been residing on the land for several years, some from as early as 1999.

According to Tulk, the municipality has also contended that the sample unit was a not a show house, despite two other municipal employees confirming with Tulk that the show house was a sample unit of the 72 units to be constructed.

However, this information was only revealed in correspondence to Tulk on September 22, almost a month after the first site inspection.

According to Tulk, evicted Gabon residents won’t take occupation of the current corrugated shacks “until such time as proper restitution is made in accordance with the court order”. Until such time, she says, the municipality is in contempt of court.