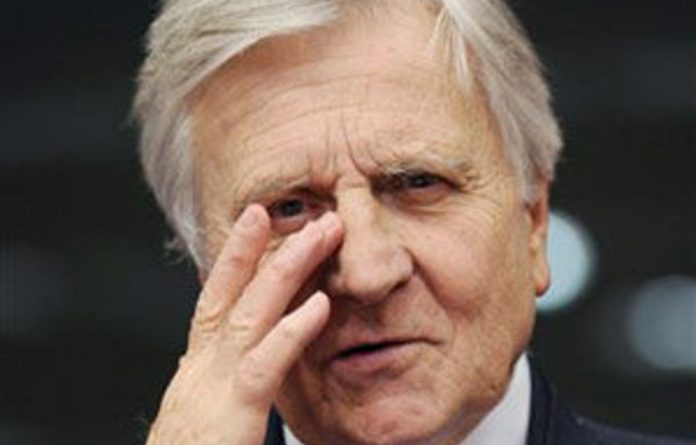 Eurozone finance ministers agreed on Tuesday to lay the groundwork for bailing out Ireland’s banking sector with the IMF, but said Dublin had to decide itself whether to request the aid.

Before the ministers announced their decision in Brussels, Irish Prime Minister Brian Cowen resisted pressure to request a bail-out — even though the nation’s banking and budget crisis risks spreading to other weak eurozone economies and could endanger the stability of the wider currency bloc.

Eurogroup chairperson Jean-Claude Juncker said the European Commission, European Central Bank and International Monetary Fund would hold talks with Ireland, whose large budget deficit is largely due to the cost of rescuing its banks.

Juncker, who chaired Tuesday’s talks, vowed to protect the stability of the 16-nation currency zone if necessary.

“The discussions that will take place between Ireland and the commission and the ECB and the IMF will enable us to have at our disposal all the elements and instruments we need were Ireland to make a request for assistance to the EU, the IMF and the Eurogroup,” he told a news conference.

We confirm that we will take action as the Eurogroup … in a determined and coordinated manner to safeguard the financial stability of the euro area if that is needed,” said Juncker.

He said the means were available to help Dublin “were Ireland to make a request for assistance to the EU, the IMF and the Eurogroup.”

The IMF said Irish authorities requested it take part in the talks.

“An IMF team will participate in a short and focused consultation, together with the European Commission and the ECB, to determine the best way to provide any necessary support to address market risks,” the IMF said in a statement.

Cowen said in Dublin the Irish government was fully funded until mid-2011, and that only its banks may need help.

He also acknowledged the government was no closer to publishing a four-year plan for tackling the budget deficit despite its financial crisis.

“I said before that I had hoped it [the plan] would be available for publication, assuming approval, … next week but I can’t anticipate the outcome of discussions in relation to it. We are working to an indicative schedule,” Cowen said.

Irish banks have grown increasingly reliant on funding from the European Central Bank, as other commercial banks have been reluctant to lend to them following the financial crisis in fellow eurozone member Greece.

The Bank of Ireland, the country’s largest lender, signalled last week it had suffered a €10-billion outflow of deposits from early August until the end of September.

Allied Irish Banks, which will be more than 90% owned by the state following a rights issue later this year, will issue a trading statement later this week with details about its funding situation.

The euro fell more than a cent to below $1,3450 and European stocks shed 2,2% on the day as investors worried that the meeting would not bring a solution to Ireland’s debt crunch.

Before Tuesday’s meeting began, European Council president Herman Van Rompuy, who chairs EU summits, told a Brussels think-tank the future of the 27-nation union was at stake in the latest spasm of a debt crisis that began a year ago with Greece.

But European Economic and Monetary Affairs Commissioner Olli Rehn cautioned against alarmism, saying: “It’s not a matter of the survival of the euro.”

The ECB and some euro zone peers want Dublin to take a quick decision on applying for aid amid signs that market contagion is affecting fellow struggler Portugal and beginning to hurt Spain.

EU sources say possible aid under discussion for Ireland ranges from €45-billion to €90-billion ($63-123-billion), depending on whether Dublin needs support for its banks.

His remarks appeared to reflect US concern that, if left to fester, they could spread and imperil global recovery.

Conditions
Eager to save face and protect a slim parliamentary majority, the Irish government has sought support for its banks, which were driven to the brink by the global financial crisis and a property market crash, without a formal state bailout.

The ECB is now channelling around a quarter of its loans to banks in Ireland. Ireland has said the bill for bailing out its banks could top a jaw-dropping €50-billion but investors fear the final figure could be worse.

In an indication of the sort of terms Brussels may face pressure to set, a senior German lawmaker said Ireland should raise its ultra-low 12,5% corporation tax rate, a magnet for foreign investment, to help cut its debt.

Higher-tax countries have long seen the Irish rate as a form of unfair competition.

Ireland’s bond yields have soared in the past two weeks and its state-guaranteed banks are largely shut out of private sector interbank lending and reliant on the ECB for funds.

This has helped push up borrowing costs of other countries on the euro zone’s periphery, such as Spain and Portugal.

Spanish short-term debt financing costs jumped at an auction of 12- and 18-month treasury bills on Tuesday.

The Irish coalition government has been reluctant to apply a politically embarrassing bailout, partly because it faces a by-election it can ill afford to lose on November 25 and also because it wants to preserve its sovereignty. – Reuters