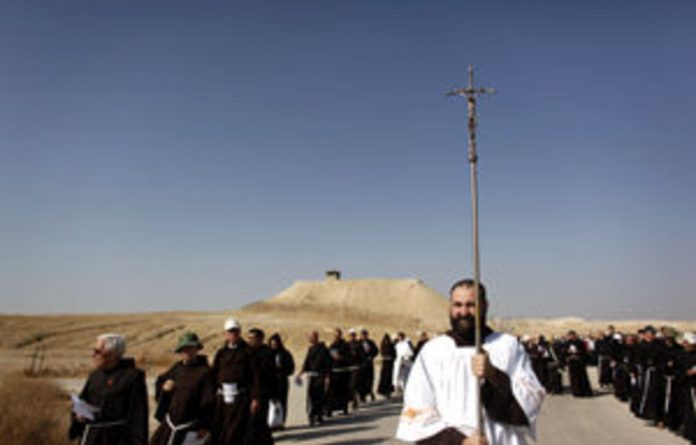 For many, many years Christians have, on the whole, accepted the Israeli state narrative on Israel and Palestine.

The first reason for this was the simple issue of compassion for those who suffered in the Holocaust, the complicity of many Christians in that and the need not to make the same mistake again.

This position was solidified with the “Jesus was a Jew” narrative. The question is only now being asked about what kind of Jew he was and what kind of prophet he was, but linking Jesus and Judaism certainly cemented the above relationship.

The “Tours to Israel” movement of course also helped with this and Christians going on so-called “pilgrimages” (often really just tours to heritage sites).

These tours were and often still are being conducted by Israeli guides and completely ignore the existence of the Palestinian people, let alone the Palestinian Christians.

It must be one of the biggest ironies that many Christians who have gone to Israel never met and interacted with Christians there. Of course they saw them (for example in the church in Bethlehem), but the level of real engagement has been minimal or completely nonexistent.

The living stones
For Christians, who have a strong “we who are many are one body” theology, this is particularly shocking. But, slowly, Christians around the world are waking up to the fact that besides the dead stones in Israel, there are also living stones — people — and some of these living stones are Palestinian Christians.

This awakening is leading to and is also strengthened by other awakenings: that Jesus is on the side of the marginalised and those who suffer, not only on their side, but actually one with them.

What this means is that solidarity with Jewish people who suffered was quite correct during and after the Holocaust, but today the solidarity belongs to another suffering people, the Palestinians.

This awakening also leads to other awakenings: Christians always thought that this was simply a fight between Jews and Muslims (and often we took the side of the Jews) but, suddenly, we are realising that there are also Christians involved and the Christians are Palestinian.

Even if there was not one Christian in Palestine, we would still have asked: whose side is God on? And inevitably, we would come to the conclusion that God is on the side of those who suffer. Some might want to argue that the Israelis are the ones who are suffering, but that is the furthest thing from the truth.

The Palestine Kairos document
There are even deeper questions to be asked: Were the promises to Isaac the same as the promises to Hagar and Ishmael? And are we not really all part of one faith tradition that emphasises truth, justice and love? And, if we are, to what extent does the situation in Israel and Palestine conform to these values?

They also call for non-violent action against the state of Israel by the international community. The call by Archbishop Emeritus Tutu to the Cape Town Opera to cancel a planned trip to Israel is in line with this wish expressed by the Christians in Palestine.

The fact is that if we do not want to see even more violence in Israel and Palestine we need to call for and support non-violent actions. Failing to do so would only encourage those who are using the tools of violence.

What we also have come to realise is that some Christians (in fact, many millions of them, based particularly in the United States) have a particular understanding of the Bible and of the future, and in some of their most extreme views there must be a war in Israel to egg on the Armageddon.

The movement
Israeli political leaders love this Christian movement because it allows Israel to continue with its oppression of the Palestinians and it encourages a military-industrial complex to continue to grow. It also provides them with significant political support in the US.

Money, indeed the worship of Mammon, is behind the thinking here. Thank God for the Palestinian Christians who have begun to expose this worship of Mammon and have called us to a theology of life and love.

The question is: Will we listen to this prophetic voice, or will we continue to be influenced by the narrative of Mammon given by its many high priests in South Africa?

Reverend Edwin Arrison is an Anglican priest and board member of the Centre for Christian Spirituality, Cape Town. Comments can be sent to [email protected]

Edwin Arrison
Edwin Arrison works from South Africa. I promote Kairos Theology esp as expressed thru the 1985 KairosDocument & the Palestine Kairos document. My key focus is the Christian community in South Africa Edwin Arrison has over 1344 followers on Twitter.
Facebook
Twitter
WhatsApp
Linkedin