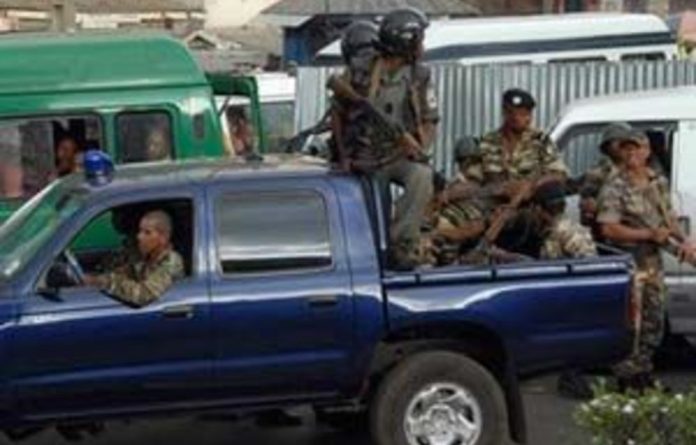 Soldiers in Madagascar have often intruded in politics. But their latest attempt is fizzling, leaving a group of officers holed up at a base and the island’s civilian leader — who himself took power in a coup 20 months ago — largely ignoring what appears to have been a poorly planned putsch.

The military officers called reporters to a base near the airport on Wednesday, prepared to read a list of their demands. Outside the base, the nation was voting on a new constitution proposed by Andry Rajoelina, who grabbed power with military backing last year. The officers’ list included a call on soldiers and civilians to rally and topple Rajoelina, but there was little sign of an uprising.

Instead, Malagasy, as the people of this Indian Ocean island are known, kept voting. Rajoelina, leaving a polling station, said he had never felt threatened. He said the majority of the military was behind him “and not bothered by declarations from a handful of people”.

Thursday, the capital was calm, with no sign Rajoelina’s forces would try to oust the mutinous military officers from their base.

From their base, the officers issued a statement aired on private TV stations on Thursday, pledging to persevere.

Among the officers at the base was Colonel Charles Andrianasoavina, who last year backed Rajoelina’s move to take power. Back then, the island nation and its military were in turmoil.

In January 2009, thousands of supporters of Rajoelina, who at the time was the capital’s mayor, had razed a building at the state broadcasting complex and set fire to an oil depot and a private TV station linked to then-President Marc Ravalomanana. Scores of people were killed.

Soldiers then opened fire on anti-government protesters, killing at least 25. That cost Ravalomanana much of the support of the military, which blamed him for the order to fire at demonstrators. By March, Rajoelina was in power.

But as the months passed with Rajoelina unable to break out of international isolation, some in the military have grown disenchanted.

“Alas! The different parties continue to hold onto their respective positions, and the people of Madagascar are suffering the consequences of false pride,” Andrianasoavina said on Wednesday.

Rajoelina has rejected international mediation efforts, imposing his own plan he says will lead to new presidential elections some time next year.

Wednesday’s constitutional referendum was a first step. The proposed new charter largely resembles the existing constitution, but a key new clause states that the current leader of a so-called High Transitional Authority – Rajoelina – would remain in power until a new president is elected. That was seen as a bid by Rajoelina to stay in power indefinitely because there was no certainty new elections would be held.

The proposed constitution also sets the minimum age to be president at 35 instead of the current 40. Rajoelina is 36.

Rajoelina won’t be able to hold onto power long without the support of a united military. Since this Indian Ocean island gained independence from France in 1960, soldiers have repeatedly meddled in politics.

The first president, Philibert Tsiranana, was a civilian. But when he stepped down in 1972 amid anti-government demonstrations, a general took over. The general was followed by a lieutenant colonel, who was followed by a ruling committee of officers, and then came Admiral Didier Ratsiraka, who led the country from 1975 until he was defeated in a 1992 vote, only to come back to win 1997 elections.

The next election in 2001 pitted Ratsiraka against Ravalomanana. The results were disputed and low-level fighting split the country between two governments, two capitals and two presidents. Ratsiraka fled to France in June 2002.

Most Malagasy live in poverty, which ecotourism, vanilla production and the recent discovery of oil have done little to alleviate. Madagascar is famed for its lemurs and other unique wildlife and was the inspiration for two animated films of the same name. — Sapa-AP