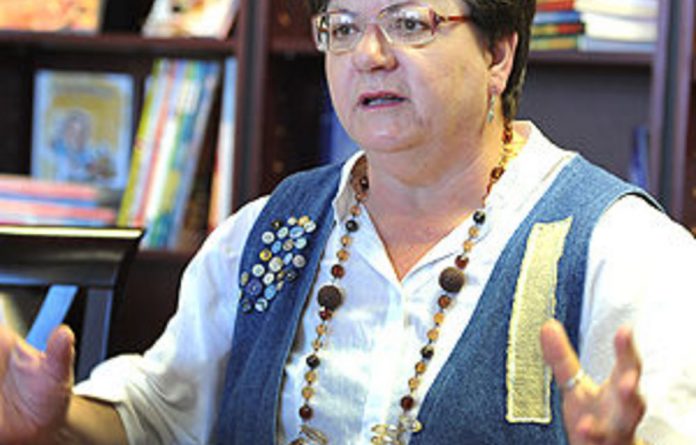 Asked by Rapport newspaper to name the people she doesn’t like, she paused for a few seconds and answered: “Black people.”

Those words have opened a can of worms for Botes, probably the most popular present-day Afrikaans woman writer. This week Die Burger Oos fired her as a columnist.

“I don’t want to back pedal over my comments. It’s the truth,” she told the Mail & Guardian.

“A friend of mine had a saying: sometimes you chop wood and you don’t consider where the splinters will land.” But she added hastily: “Maybe it was impulsive … and maybe it’s unfair to put all black people under one umbrella. Naturally, there are a lot of black people that I like very much. But I certainly meant what I said.”

She said she had received about 1 000 emails supporting her comments.

Botes won the 2010 K Sello Duiker Memorial Literary award earlier this month in the Afrikaans section for her novel, Thula-thula, which deals with child abuse and incest. With an age restriction of 18, the work has sold more than 34 000 copies.

Her publisher, Tafelberg, an imprint of NB Publishers, distanced itself from her remarks. “We believe that all our authors are entitled to their own views. In this case the publisher does not share the author’s view,” NBP’s Riana Barnard said.

The reasons
Crime lies at the heart of Botes’s racial paranoia. “I’m scared,” she said. “In my daily life there’s no one else that I feel threatened by except black people. If a courier comes to my door and he’s white, coloured or Indian, I’d have no problem inviting him in for a glass of water. But I would feel ­threatened by a black man.” Botes said she would also never appoint a black gardener.

She said that two years ago her laptop containing a manuscript was stolen while she was asleep. She woke up when a torch flashed across her face. A neighbour was murdered.

“You tell me what the face of crime is in South Africa. If you hear the window shatter and confront the perpetrator, who do you expect that crook to be?” she asked. What about trying to conquer racial stereotypes?

“I don’t have the means to get my head around that of a black man,” she said. “I can’t understand that. As a writer, I write what I see, what I experience and put it into context. It isn’t my job to be politically correct.”

Moving along
She and her husband are planning to move to England as soon as he goes on pension. Her children already live there.

“Here in Port Elizabeth, I wouldn’t go to a deserted beach alone. It’s simply too dangerous. The English villages where my kids live don’t even have streetlights and I would walk there in the middle of the night without fear,” she said.

“Just last week I read a piece about an 84-year-old woman attacked in her house in Durbanville. I don’t want to be 84 years old and attacked in South Africa in my walker. I want emotional freedom, freedom from fear. That’s very important to me.”

Botes is not the first Afrikaans celebrity in the past few months to get involved in a race row. Last month Afrikaans singer and daughter of Bles Bridges, Sunette Bridges, wrote on her Facebook page: “Of all the instruments that is needed to build straight … a sjambok is the only one that works for this Groenie of mine. Eish.” “Groenie” or “Groenewald” is a ­racist term for blacks.

Comments on Rapport‘s website showed that while some readers supported Botes’ comments, hers was not the only viewpoint.

Alida wrote: “You have no idea how disrespectful you are. Beneath the veil of honesty and wit, you are offensive, loveless and quite unjust towards your fellow citizens. The sooner you emigrate, the better.”

François wrote: “Pack your bag and get lost, South Africa doesn’t need people like you — People who suck South Africa dry of its money and resources and then drag our country’s good name through the mud overseas .”

Noted Barbara: “Please don’t include me when you say ‘all white people are like this’. I’m proud to say I’m definitely not like you. Talent, unfortunately, can’t make up for being common.”