The rise of the African border town 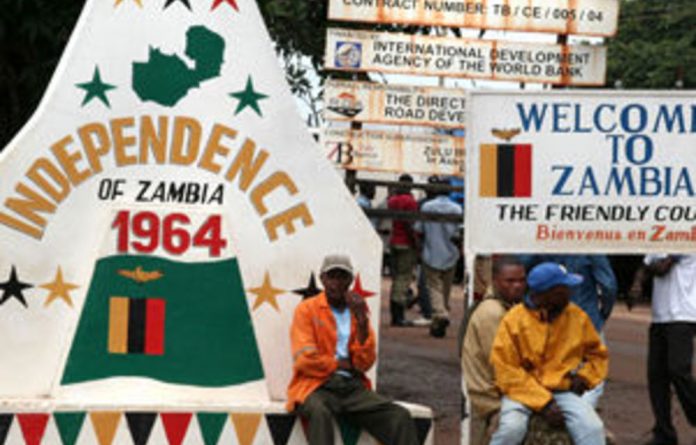 The border town of Kasumbalesa is about 90km south of Lubumbashi, the capital of Katanga province and the major industrial hub in the southeastern part of the Democratic Republic of Congo.

Trucks moving to and from the mines in Katanga province pass through Kasumbalesa, which is the main road link between the DRC and southern Africa. Earlier this year I spent half a day there.

If Africa’s irksome borders have a poster-child, this is it.

On the Zambian side of the border I counted more than 500 trucks in a two-pronged line-up that stretched for 5km.

Truck, car and human traffic moving in both directions were forced to navigate a perilously tight corridor, which at times narrowed to a single lane. In less than an hour I witnessed several near misses and one collision involving a cyclist who was thrown under a truck and nearly crushed.

No facilities or infrastructure of any kind were visible. Large mounds of refuse had piled up at points along each side of the road. The stench was overpowering. Numerous trucks had goats or other animals tied to the back of them.

Feed was spread out over the petrol tanks and other platforms for them to graze. Other trucks had thorn bushes covering their cargo loads to prevent thieves from climbing on board.

My contact at the border had a small office adjacent to the “no-man’s-land” between Zambia and the DRC. But it was nothing of the sort: the border was completely porous for Congolese (although not for Zambians).

Roaming around
They gushed in incessantly. Thugs, prostitutes, smugglers, even some refugees roamed alongside traders, police and people in trucks and cars. The healthy presence of (clearly ineffectual) uniformed men detracted only marginally from what otherwise seemed a near perfect vision of lawlessness.

Another researcher and I interviewed 30 truckers at the border — an impossible task were it not for my contact boldly running interference with the young thugs who repeatedly swarmed around us.

The majority of truckers had waited between two to five days although several had been stuck at the border between six and 14 days. They all railed against inept customs staff, corruption and the total lack of security.

Most rarely left their vehicles but when they had no other choice they would pay Congolese boys to watch their truck. If they didn’t, sure as eggs the youngsters would rob it and give whatever they stole to the criminal syndicates that make a living reselling truckers’ possessions in Lubumbashi.

By global standards African borders are not just dangerous places to be, they are also staggeringly inefficient. This is one major reason African goods struggle on the world market.

Inspections, paperwork and congestion create delays for transport trucks at borders the world over. But two or three-week delays are a uniquely African phenomenon.

Each day these trucks are idle, the producer of the goods they are carrying can expect to lose up to $400. The high cost of transporting those goods from source to ports or regional hubs makes them uncompetitive. When cargoes take only a few days to reach destinations within Europe, why would multinational firms trade with Africa?

A new day was supposed to dawn in December 2009, when Southern Africa’s first one-stop border post (OSBP) opened at Chirundu, the border town on the mighty Zambezi, which separates Zimbabwe and Zambia.

New design
With money and technical assistance from a host of international donors, the new border was designed to enable people, vehicles and goods to exit or enter both countries through a single facility staffed and operated jointly by the neighbouring countries.

By using the same computerised customs management system, the process would be streamlined, border agency interventions minimised and congestion lessened. Critically, initial studies suggested that the waiting times for hauliers transporting goods across the region would be at least halved.

That has not quite happened. Both governments are still wedded, in varying degrees, to old practices. They have been slow to harmonise their systems for the import and export of goods. This is mostly down to state politics and sovereignty.

The end result is that trucks continue to experience lengthy delays, with all the negative trickle-down effects for trade facilitation in the region. For passengers, however, the OSBP future looks bright.

My exit-entry experience lasted less than 20 minutes — and that’s with a non-African passport. Three other OSBPs, including Kasumbalesa, are scheduled to be rolled out in the region by 2012.

Indeed, the hope is that my description of that border post will be a mere historical artefact by next year. The construction of a new state-of-the-art facility at Kasumbalesa, on 100 000m2 of land off the main road, with ample parking for heavy and light vehicles, as well as warehouses and other infrastructure, is scheduled to be completed by early 2011.

The Common Market for Eastern and Southern Africa and other major stakeholders, including the United Kingdom’s department for international development and the United States Agency for International Development claim that this facility and the newly installed computerised systems will ease the crippling delays and chaos I witnessed.

Undoubtedly it will, for a time; but unless it is matched by concerted efforts to tackle corruption, especially in the DRC, I wouldn’t bet against recurrent bouts of border mayhem.

Raising the white flag
Historically, security has always been a problem at African border posts, which explains why taking photographs anywhere near them has always been strictly verboten. In late February I spent two days in the Beitbridge border area between South Africa and Zimbabwe and could scarcely believe what I heard from people working there.

The police had essentially raised the white flag at Beitbridge. They had given up trying to control the flow of desperate migrants from Zimbabwe who use the bridge and then drop down on to the bank of the river, evading the police only a few metres away from their nearest station. Marauding gangs — known locally as guma-guma — operate on both sides of the border and routinely attack and rob car passengers and trucks.

They were responsible for at least some of the shocking number of rapes and gang rapes of Zimbabweans in the border area in 2010 documented by Médecins Sans Frontièrs (MSF). In some cases the perpetrators were the same people who helped them cross the border. According to MSF, countless more victims of rape fail to report it, perhaps fearing they might be repatriated.

In June South African special forces troops were deployed to the border to help the police stem the flow of illegal migrants and restore security.

Yet for all Beitbridge’s security woes, South Africa is in a better position than most, if not all, other sub-Saharan African states: it has the money and expertise to patrol its borders. Most governments on the continent don’t really know what is moving across their frontiers because they don’t have the means to control or monitor them.

Colonial map-makers must share some of the blame. They did future African governments no favours in bequeathing borders that are not only long but also cut across some of the most inhospitable terrain on earth.

In other parts of the world vast sums of government money are spent on border surveillance technology and equipment. Ships, aircraft and in extreme cases even sophisticated wall or fence systems are employed to restrict and monitor cross-border movements.

The absence
The reason is simple: insecurity spills. The brutal conflicts that ravaged parts of West Africa in the 1990s were fuelled in part by the cross-border flow of arms and diamonds. The easy movement of drugs and arms across the region is still a major cause of instability, especially in countries such as Guinea and Guinea Bissau.

The absence of “hard” borders in Africa has meant that even livestock are a source of insecurity in parts of the continent.

“Cattle rustling is a major problem along the borders between Uganda and Kenya and their northern neighbour, and is hardly unknown on the South African-Lesotho border,” says defence analyst Helmoed-Römer Heitman.

More worryingly, in the Sahel, smugglers and bandits can cross borders at will. Heitman says they “are often better equipped and armed than the local security forces. Some have allied themselves with ­guerrillas and terrorists for mutual convenience.”

Yet just when all the talk is about hardening border security in Africa, in the one part of the continent where a new international border is almost certain to be established next year, Sudan, a “soft border” may in fact be the best way forward.

After nearly half a century of civil war, a referendum in southern Sudan slated for January 9 to 15 next year will inevitably confirm that the south wishes to go it alone as a separate state from the north.

I was part of a recent Brenthurst Foundation delegation to Sudan, which concluded in its report that a soft border for trade and people flows might reduce the prospect of renewed north-south conflict and promote economic development on both sides of the border.

It would be nice to imagine an Africa where one day “soft borders” are evidence of governments’ strengths rather than weaknesses. If that sounds a little bit like Europe, is that so bad?

Dr Terence McNamee is the deputy director of the Johannesburg-based Brenthurst Foundation, established by the Oppenheimer family to strengthen Africa’s economic performance. His most recent book, Decade (Phaidon, pictures edited by Eamonn McCabe), has just been published.

Trafficking and the corruption, collusion nexus