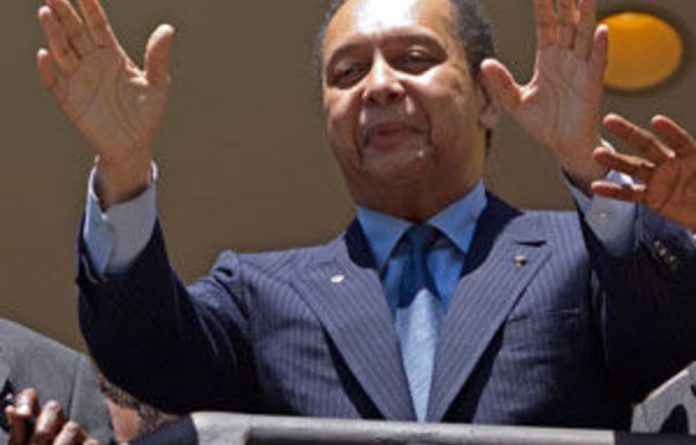 Duvalier, however, issued a statement denying the remarks by aides, but did not rule out a political role in the country he was ousted from 25 years ago.

Duvalier’s surprise return late on Sunday has stoked further turmoil in the country, as Haiti struggles to recover from a devastating earthquake and resolve the political crisis triggered by the tainted vote.

“[Duvalier] will stay in Haiti forever, it’s his country. And take part in politics. That’s his right. A politician never dies,” said his lawyer, Reynold Georges, adding that Duvalier was preparing to move back into his old house.

Another aide, Henry Robert Sterlin, went further, telling Agence France-Presse: “We need to shake everything up so that the elections are annulled and new elections are held in which Duvalier can run.”

“Then Bingo,” he would be re-elected, added Sterlin, a former Haitian ambassador to France who presented himself as the spokesperson for Duvalier.

Duvalier later issued a statement through his partner, Veronique Roy, that appeared aimed at Sterlin’s remarks and denied “any political statements … that may have alluded to scenarios related to Haiti’s electoral process”.

The statement did not rule out a return to politics for the 59-year-old Duvalier, who ruled the country with an iron fist for 15 years.

Political uncertainty
The former strongman has returned at a time of great political uncertainty, with the Organisation of American States (OAS) claiming that the November 28 presidential vote was riddled with irregularities and fraud.

The monitoring group, which had been asked to review preliminary results, said on Wednesday that President Rene Preval’s handpicked candidate, Jude Celestin, should be eliminated from the race.

But Haiti’s election commission has said it will only change the order on the basis of valid legal complaints, which must be filed by Friday and would be considered from next week.

Memories of Duvalier’s repressive 1971 to 1986 regime remain strong, and human rights groups have accused him and his late father, Francois “Papa Doc” Duvalier, of presiding over decades of unparalleled oppression and abuse.

On Tuesday, prosecutors charged him with corruption, embezzlement of millions of dollars from state funds and criminal association.

And in a new legal challenge, four Haitians, including a prominent journalist, filed criminal suits against him alleging crimes against humanity.

In another potential twist, former Haitian president Jean-Bertrand Aristide, currently in South Africa, said he was also ready to return at any time, although he may not have a valid passport.

Aristide, Haiti’s first democratically elected leader, served two stints as president before being forced to flee after a popular revolt in 2004 — like his sworn enemy Duvalier 18 years earlier, aboard a US Air Force plane.

Rights groups and opponents have long accused Duvalier of torture and killings, as well as plundering hundreds of millions of dollars from the state’s coffers.

Secret police force
The dreaded Tonton Macoutes, a secret police force loyal to the Duvalier family, has been accused of kidnapping, torturing and killing up to 30 000 suspected opponents during the 1960s and 1970s.

But Georges, Duvalier’s lawyer, protested against the legal moves, saying the statute of limitations had expired long ago.

“The law here in Haiti says you have 10 years to prosecute somebody if they accuse him of a crime and Mr Duvalier was living in France for 25 years,” he told a group of journalists.

Duvalier came to power in 1971 when he was just 19, succeeding his late father. He barred any opposition, clamped down on dissidents, and rubber-stamped his own laws.

But despite the past, he still enjoys some support.

“I think there is support for him, I don’t know how big it is,” Haitian-born history Professor Robert Fatton of the University of Virginia said shortly after Duvalier’s return.

“You have to remember the Haitian population is very young. Something like half the population never experienced the viciousness of the dictatorship.” — AFP