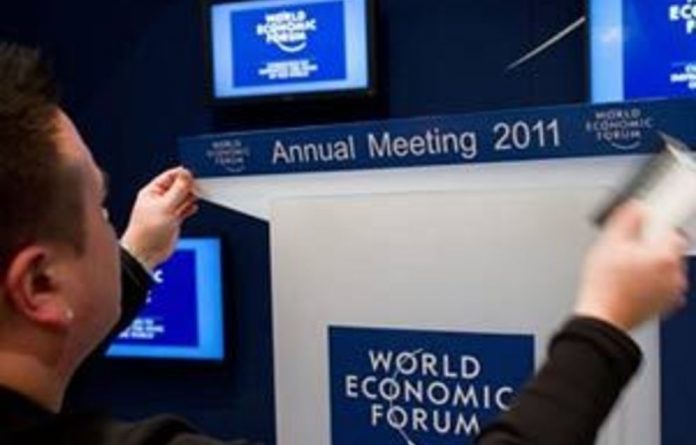 World leaders and top executives have plenty of crises to discuss this year.

More than 30 heads of state, over 1 400 business leaders and eight central bank chiefs will flock to Davos, an expensive Swiss ski resort, for the Forum which opens on Wednesday.

The WEF named the risk that parlous government finances will trigger sovereign debt defaults as one of the biggest threats facing the world in 2011 in a report published before the meeting.

Klaus Schwab, who chairs the Forum, said nations were suffering from “global burnout syndrome” and were too weak to tackle the plethora of inter-related threats facing business and governments.

To help to address the problem, the WEF will launch at this year’s Forum a global network designed to help policymakers and corporate chiefs to share information about potential risks.

French President Nicolas Sarkozy, chairperson of the Group of 20 top developed and developing nations (G20), will focus in a speech on Thursday on his key G20 agenda — new rules to curb commodity price volatility and avoid food riots and weak growth.

Rising prices for food, fuel and metals have raised concerns about inflation globally. They could also lead to protectionism and the kind of unrest seen in Tunisia and Algeria in recent weeks.

“If we don’t do anything [about rising food prices) we run the risk of food riots in the poorest countries and a very unfavourable effect on global economic growth,” Sarkozy said on Monday.

Glitz and hype surround the Davos meeting, sometimes billed “the world’s top networking event”, though organisers say that it does not set out to solve all the problems it discusses.

As always, much of the real business is done on the sidelines of the event, where policymakers and CEOs cut deals away from the glare of publicity in luxury hotel rooms.

Sarkozy may use this year’s Davos meeting to discuss informally with German Chancellor Angela Merkel options for beefing up the eurozone’s crisis-fighting mechanism, the European Financial Stability Fund (EFSF).

Analysts believe that sooner or later, some European governments will restructure their debts and impose losses on creditors, forcing more aid for banks exposed to such debts.

From emerging economies, Russian President Dmitry Medvedev makes an opening speech on Wednesday — though the Kremlin said earlier plans for him to meet Swiss leaders were cancelled after a suicide bomber killed 35 on Monday at a Moscow airport.

Chinese Commerce Minister Chen Deming is the highest ranking official from the country’s government who is in Davos.

Michala Marcussen, head of global economics at French bank Societe Generale, says Davos provides a platform for European leaders to explain the region’s debt situation to the rest of the world.

“What makes Davos unique is the mixing of business leaders and policymakers. Davos will be one of the opportunities for European policymakers to know how the rest of the world sees and understands the European situation,” she said.

European finance ministers discussing ways to raise the lending capacity of their rescue fund reached no conclusion at a meeting last week.

Financial markets are worried that the continent’s leaders are taking too long to come up with convincing, long-term solutions to the weight of debt which is crushing weaker eurozone economies such as Ireland, Portugal and Spain.

The EFSF, set up in May to provide financing, can borrow money on the market with euro zone government guarantees of up to €440-billion — insufficient if both Portugal and Spain apply for emergency financing.

Germany is key to any changes to the eurozone agreement but has so far resisted calls to increase the size of the fund.

“We are shifting towards a new economic governance model, a process driven by Germany. It will be done step by step,” Marcussen says. – Reuters