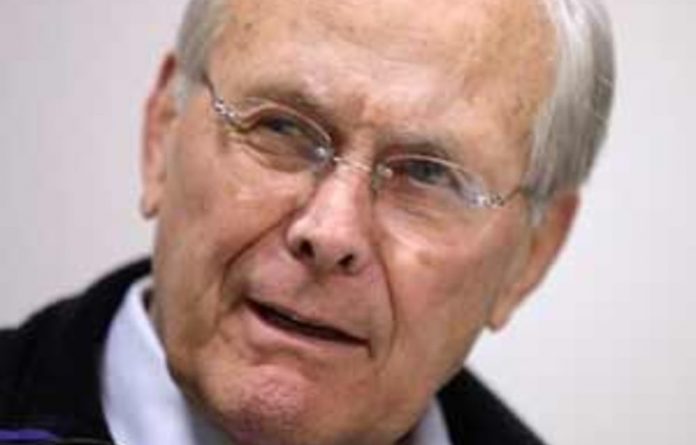 Donald Rumsfeld, US defence secretary under George Bush, warned on Tuesday that attempts to prosecute the ex-president abroad for alleged torture of terrorism suspects was a misguided response to US public policy.

Rights groups have threatened legal action against Bush in Switzerland for alleged mistreatment of inmates at the Guantánamo Bay prison in Cuba. Bush was due to visit Geneva to address a Jewish charity gala on Saturday, but organisers cancelled the event due to what they described as security concerns.

“People are trying to make legal issues out of public policy issues, which is unfortunate,” Rumsfeld told Reuters. “I think it’s a sign of the times.”

Rumsfeld, who personally authorised harsh interrogation techniques used on some terrorism suspects, said he had not considered whether he, too, might face prosecution if he traveled abroad.

Still, he warned of efforts overseas to create “universal jurisdiction” to try Americans in foreign countries.

“We prefer to have American people function under our system, and not some rogue prosecutor in some other country,” he said, speaking to Reuters as part of a flurry of interviews to accompany the release of his memoir, Known and Unknown.

The book delves into the controversy that characterised his service at the Pentagon, including the conduct of US-led wars in Iraq and Afghanistan.

Rumsfeld wrote that he never authorised waterboarding — simulated drowning — but he also called CIA interrogators who used the interrogation technique “patriots, not criminals”.

“The questioning of those in Department of Defense custody provided information that saved innocent American lives. I make no apology for that,” he also wrote.

No apologies
Rumsfeld (78) served as defense secretary in two separate Republican administrations, becoming both the youngest and oldest man to hold the job. Only Vietnam War-era defense secretary Robert McNamara served for longer.

Many historians and military experts say Rumsfeld’s decisions during the wars in Iraq and Afghanistan helped spur insurgencies and led to other difficulties.

For example, Rumsfeld insisted on a relatively small force for the 2003 invasion of Iraq, rejecting the views of many US generals that more troops were needed to stabilise the country once Saddam Hussein was toppled. In Afghanistan, the US military acknowledges it had far too few troops to battle Taliban insurgents.

Rumsfeld writes that he should have pressed Bush harder to accept his resignation over the Abu Ghraib prison scandal in Iraq, which unleashed global condemnation of the United States when images of abused prisoners surfaced in 2004.

But the brash and unapologetic style that came to characterize Rumsfeld — and to a certain extent the Bush administration’s muscular approach to foreign policy — also is reflected in his book and related interviews.

Rumsfeld noted the invasions of Iraq and Afghanistan had left those countries with more freedom, politically and economically. That progress, he said, could inspire pro-democracy groups in countries like Egypt, where protesters are demanding the immediate ouster of President Hosni Mubarak.

“I don’t doubt for a minute that other countries in the region looking at that have to say: ‘Well, isn’t that interesting?” Rumsfeld said.

Still, he warned the journey Egypt was on “is tough, is risky and has to proceed at a pace that fits their culture.”