A Rose thorn in the flesh 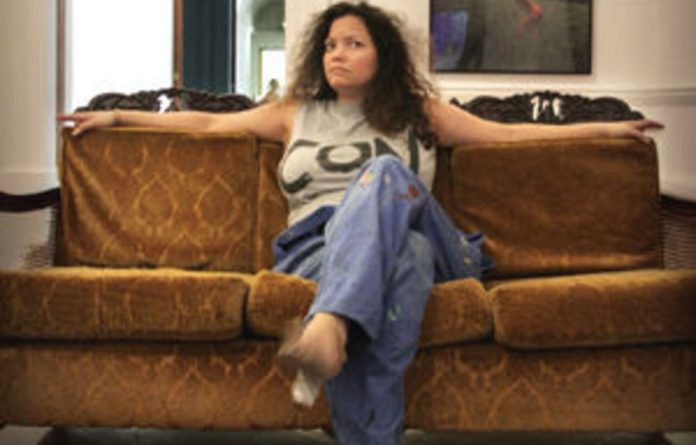 Tracey Rose’s mid-career retrospective at the Johannesburg Art Gallery is as much about a nostalgic peek at her impressive collection as it is about reminding naysayers that she is still around, at work, and as prickly and relevant as she was when she set out in the mid-1990s.

‘I wanted it now, to reflect on my work. There’s an impression that all I do is get drunk and shout at people,” she says from her kitchen in Mayfair, Johannesburg.

Chaos and creativity
Setting up an interview with Rose was easy enough. I sent an SMS, followed by a call. But we quibbled about where we would conduct the interview. Her house, she said, was in a rather chaotic state and she would prefer to do it in neutral territory. I explained that the interview had to be in situ — her home, which she also uses as her studio.

Indeed, upon arrival I experienced the clash between chaos and creativity. This was the home of an artist apparently hard at work. She led me to her kitchen where we engaged in small talk as she cleaned up.

Before the interview several people I spoke to described her as ‘a difficult person”; the more charitable thought of her as ‘misunderstood”.

Her current exhibition, Waiting for God, was co-curated by Khwezi Gule and Renaud Proch in consultation with Linda Givon, the former gallerist who signed on Rose when Givon was the proprietor of the Goodman Gallery. The exhibition includes Lucie’s Fur, a photographic series; Waiting for God, a video installation shot in Israel; The Wailers, a video of Hasidic Jews playing basketball under water; and Ciao Bella, a triple video projection made for the Venice Biennale in 2001. One is struck by the high quality of her video work (she went for a short course at the Afda film school).

Gule — once at the Johannesburg Art Gallery but now at the Hector Pieterson Museum — explained why Rose was having a retrospective exhibition. He said he was affronted by the fact that Rose had ‘never had a solo exhibition at a South African museum” or even had a monograph written about her.

Some argue that Rose has not made any significant, critically acclaimed work for years. In fact, her most recent show, Plantation Lullabies (2008), received a reception that ranged from lukewarm to hostile. It contained a complex dialogue between two sock puppets about art — the intricacies of which were lost on the Johannesburg public, Rose would complain in ­retrospect.

She says that when she sets her mind to make a work of art, her intention is to ‘lose it”. She attempts ‘to create a visual language that is mine”. One of the tools is her body, a personal and unique canvas, which she uses ‘as material I can manipulate”. She uses her body (nude, covered or disguised, in staged postures) and sometimes others’ bodies ‘to get people to ask questions”.

In Span I and Span II (both from 1997), a clean-shaven Rose sits on a television in a glass cabinet in a gesture ‘associated with 19th-century ethnographic museums” — this is how academic and historian Annie Coombes describes the work in her groundbreaking study, History after Apartheid (Wits University Press).

Unlike those dark days when non-whites didn’t own anything, not even their own bodies, the voyeuristic stare is now kept in check by the glass case and a mop of Rose’s hair strategically covering her pubic area. The all-seeing, piercing stare has also mutated into something more self-conscious and guilt-ridden, aiding Rose’s ­meaning.

In an interview with Coombes, Rose says: ‘Hair is significant in coloured communities. It marks you in certain ways, towards whiteness or blackness.” The gesture is a transgression of St Paul’s injunction that women shouldn’t cut their hair as it’s their ‘crown”.

Rebellious gene
The artist was born Tracey Adrienne Harriet Rose (she draws my attention to the masculine feel of some of her names) to a Griqua mother and a father with roots in the islands of St Helena and Mauritius. She has not used her coloured heritage in a triumphant, nationalist sense that one sometimes observes in our public discourse. Her ‘interventions” are abrupt, in your face and self-interrogating, even questioning her ‘own complicity in apartheid”, Coombes argues.

Both her parents were trade unionists and she wonders whether her feisty side is a rebellious gene passed on at birth. Rose, born in 1974, is manifestly a child of apartheid — she has it all: the rage at injustice, the conflicted identity and the disregard for authority.

Throughout the interview, Rose shows her irate side, some of it directed at the white patriarchy: ‘I really hated white people”, a statement she immediately tempered by saying ‘hating white people is like hating myself”, showing the conflict that sometimes afflicts mixed blood people.

Derek Walcott wrote about it in the poem, A Far Cry from Africa: ‘I who am poisoned with the blood of both/ where shall I turn, divided to the vein?”

Catholic doctrine
Rose’s other preoccupation is God. About him, Rose says: ‘God is full of shit. He’s not a healthy entity.”

Gule says that Rose’s work interrogates the way ‘religious dogma has constructed male and female roles in society”. Some of this, no doubt, is the result of the Catholic doctrine that Rose was force-fed at the convent schools she attended in Durban, her place of birth, and later in Johannesburg. ‘I wanted to give birth to the Messiah,” she tells me. ‘I wanted to fuck God.”
Some would say that this exhibition does quite a lot of that.

Her work interrogates (think of a thorough detective and a homicide suspect) God as the alpha male and men as the mirror image of the heavenly patriarch.

Rose’s work is incessant in its exploration and subversion of Judaic-Christian ritual, such as the Eucharist.

One of her career milestones is Ciao Bella, which features 12 female characters, more like archetypes, all played by herself. They include our own Saartjie Baartman, American-born French dancer Josephine Baker and the seductive water-spirit, Mami Wata. The work questions the strictures and form of the Eucharist, perhaps one the of the few rituals that St Paul took the trouble to explain in his letter to the church at Corinth.

The video work, Waiting for God, more than two hours long, is shot on the Mount of Olives (the Garden of Gethsemane is found on its slopes). In the video, in which she originally wanted to perform nude (and couldn’t because a man was sitting gawking at her, probably stroking his manhood), she doesn’t do much except sit, waiting for God.

Lucie’s Fur, from 2007, comprises eight photographs and an accompanying video work. In this, according to a press statement, ‘Lucifer meets Lucy, the first female hominid with no relation to Adam’s rib. It questions all manner of dogma (sexuality, doctrine, the nation and its symbols etc etc).” Take, for instance, King and Kunt, a self-image over a London background in which a beaming Rose is clad in Union Jack skirt provocatively pulled up to reveal her in the act of urinating.

Another image, Adam and Yves, has strong homoerotic overtones — a man is coming from a thicket leading another man.

Racial conflagration
The image Annunciation has a picture of the old Durban waterfront before its refurbishment. What’s subversive in some of her work is how titles, as in this case, don’t fit what the viewer expects to see — the annunciation is the episode in the Gospels in which the angel Gabriel tells Mary of her impending virgin birth.

Most of her work has been an attempt to come to terms with her gender and identity — someone the apartheid bureaucrats classified as ‘coloured”. About her interminable quest to discover her identity, she says: ‘I put it to rest although I haven’t quite resolved it. It seems redundant to be speaking about race in the 21st century. The rage [at white people] was productive for a period, not now.”

What played a part in the burning out of this racial conflagration was the fact that her sister is married to a Spanish man and the couple have three daughters who are growing up as ‘white” in the Netherlands.

‘So if I hate white people it’s like I’m hating myself. Besides I’m too old to be angry. I also found out that what I thought was hatred was in fact a deep sadness.”

When we speak about the artist and her role, she speaks of the artist in almost shamanistic terms.

‘Good art comes from within; what you create comes from another place,” she says. ‘If you are going to make decor art, go paint at the Zoo Lake.”

Whatever people may think of Rose, what they can’t ignore in her oeuvre is her sense of adventure and subversion, her examinations of the nation, the status of women by using the self, the body, the everyday, the esoteric and whatever else she can muster.