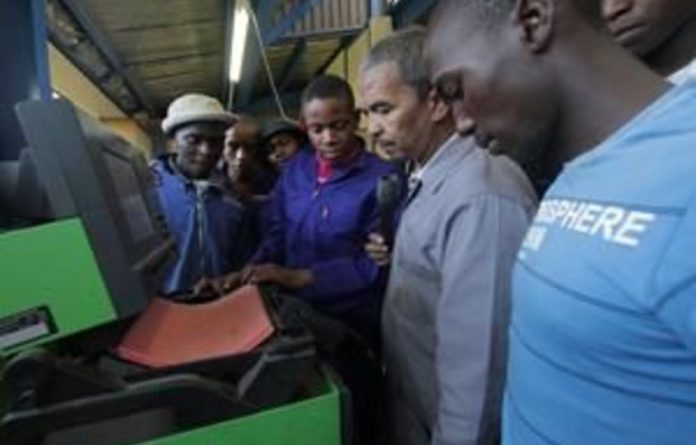 Government is in the final stages of fashioning a response to South Africa’s artisan shortage.
The new growth path and national skills development strategy have set a target of registering an additional 50 000 artisans by 2015. This entails not only a dramatic increase in the recruitment of learners, but also in the throughput rates of trainers.

Government has no idea how many qualified artisans are practising in South Africa because, until now, they have not been required to register.

Speaking to the Mail & Guardian, Percy Moleke, the deputy director general of skills development in the department of higher education and training, said: “We need to register at least 21 000 new learners on artisan programmes in the next year.”

This number will have to increase by 1 000 a year for the following three years, she said.
The recruitment numbers take into account drop-out rates. The DHET expects 70% of the class of “2011-2012” will pass their trade tests in two years’ time.

Learners are then required to serve a one-year apprenticeship.

“The plan is to create — as far as possible — a single, cross-sectoral system,” said Moleke. “One of our problems is that each sector has developed its own programmes. The training the artisan receives is so sector-specific, certificates of competence are issued by Setas [sector education and training authorities].

“Unfortunately, when an artisan applies for a job in an industry outside the one represented by his or her Seta, the certificate is often rejected. This happens most often in sectors such as mining and manufacturing, in which workplace health and safety are serious issues.

“We want to return to a situation in which there is a single standard of competence for the trades. It will raise standards and increase the portability of qualifications,” she said.

The state’s master plan takes the form of “a seven-step national programme that covers all the key processes from start to finish, including the indenturing or registration of an apprentice for artisan training, final certification and quality assurance”, Moleke said.

Implementation of the programme would most likely entail a form of Seta “clustering” first mooted when the third phase of the national skills development strategy was being drafted last year. Instead of Setas clustering on the basis of their sectoral similarities and overlaps, the education department proposed that common functions and trans-sectoral initiatives be withdrawn from their control.

Setas will set their individual targets and transfer the requisite funds and resources to an ad hoc structure that manages the initiative.

Florus Prinsloo, the department’s technical adviser on artisan development, said: “We want learners to be registered under the Basic Conditions of Employment Act, as is currently the case with learnerships, because this gives them the greatest protection of their rights. The old apprenticeship contracts did not offer this protection.”

The practical component covers the entire scope and application of the specific trade, laying a practical foundation for what is expected to be covered in the workplace, but in a simulated environment.

“This was previously known as the ‘off-the-job’ module: six to eight months spent in a training centre, starting with basic hand-tools, health and safety and so on until there are sufficient skills to enter a workplace to apply knowledge,” Prinsloo said.

Of workplace exposure, Prinsloo said: “For the next two to three years, apprentices are exposed to real-life situations. They work alongside artisans. We used to call them ‘journeymen’, but now we refer to them as ‘mentors’ or ‘workplace coaches’, who are qualified and experienced in the same trade for which the apprentices are registered.

“This is where we have probably our worst system blockage: we don’t have enough of these guys left anymore. We’re trying to draw them back into the system, bring them back from abroad or out of retirement,” Prinsloo said.

“It is also likely that we will go back to the old competency-based modular training system for artisans because it worked like a charm before it was scrapped in favour of unit standards-based programmes.”

This move has been on the cards since last year when Higher Education and Training Minister Blade Nzimande conceded publicly that the post-apartheid government had erred when it overhauled the artisan development system after coming to power.

“Initiatives were hastily introduced, superficially explained and communicated and imposed on the system with limited understanding of the consequences,” Nzimande said.

“The Quality Council for Trades and Occupations and the National Artisan Moderation Body are working closely with other partners on three broad processes: qualification development, capacity-building and the seven-step implementation framework,” said Prinsloo.

An artisan development task team has been convened, with the business sector represented by Bobby Godsell and Brian Angus (both of Business Leadership SA). The team met recently to discuss ways of hosting apprentices in sufficient numbers as well as sources and levels of funding.

“Setas that offer artisan development programmes agree that the average total cost of training is about R300 000 per person,” Prinsloo said.

“There is a widespread feeling that employers should bear half of this cost, which leaves R150 000 to be funded by the Setas, the National Skills Fund, Unemployment Insurance Fund or even donors. Once we have determined how much individual Setas can afford to contribute, we will provide the top-up funding from the other sources.”

Prinsloo said that the task team had also looked at possible rationalisation of trades. “There are about 850 trades officially listed in South Africa. The organising framework for occupations describes 187, but a study conducted by the Setas in 2009 came up with between 85 and 90. This seems a more reasonable number.”