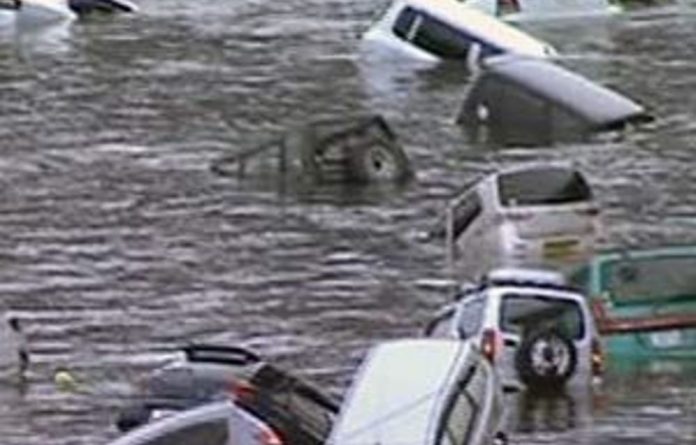 The biggest earthquake to hit Japan in 140 years struck the north-east coast on Friday, triggering a 10m tsunami that swept away everything in its path, including houses, cars and farm buildings on fire, media and witnesses said.

At least one person was killed in Fukushima prefecture, north of Tokyo where four million homes were without power. The 8,9 magnitude quake caused many injuries, public broadcaster NHK said, sparked fires and the wall of water, prompting warnings to people to move to higher ground in coastal areas.

The Philippines, Taiwan and Indonesia all issued tsunami alerts, reviving memories of the giant tsunami which struck Asia in 2004. The Pacific Tsunami Warning Centre issued alerts for countries as far away as Colombia and Peru.

There were several strong aftershocks. In the capital Tokyo, buildings shook violently. An oil refinery near Tokyo was on fire, with dozens of storage tanks under threat.

“I was terrified and I’m still frightened,” said Hidekatsu Hata (36) manager of a Chinese noodle restaurant in Tokyo’s Akasaka area. “I’ve never experienced such a big quake before.”

TV pictures showed the tsunami carrying the debris and fires across a large swathe of coastal farmland near the city of Sendai, which has a population of one million. The pictures suggested the death toll was going to rise.

NHK showed flames and black smoke billowing from a building in Odaiba, a Tokyo suburb, and bullet trains to the north of the country were halted.

Black smoke was also pouring out of an industrial area in Yokohama’s Isogo area. TV footage showed boats, cars and trucks floating in water after a small tsunami hit the town of Kamaichi in northern Japan. An overpass, location unknown, appeared to have collapsed into the water.

Kyodo news agency said there were reports of fires in Sendai where waves carried cars across the runway at the airport.

The building shook for what seemed a long time and many people in the newsroom grabbed their helmets and some got under their desks,” Reuters correspondent Linda Sieg said in Tokyo.

“It was probably the worst I have felt since I came to Japan more than 20 years ago.”

Great Kanto quake
The quake was the biggest in 140 years. It surpasses the Great Kanto quake of September 1 1923, which killed more than 140 000 people in the Tokyo area. Seismologists had said another such quake could strike the city any time.

The 1995 Kobe quake caused $100-billion in damage and was the most expensive natural disaster in history. Economic damage from the 2004 Indian Ocean tsunami was estimated at about $10-billion.

The Tokyo stock market extended losses after the quake. The central bank said it would do everything to ensure financial stability.

Passengers on a subway line in Tokyo screamed and grabbed other passengers’ hands during the quake. The shaking was so bad it was hard to stand, said Reuters reporter Mariko Katsumura.

Hundreds of office workers and shoppers spilled into Hitotsugi street, a shopping street in Akasaka in downtown Tokyo.

Household goods ranging from toilet paper to clingfilm were flung into the street from outdoor shelves in front of a drugstore.

Crowds gathered in front of televisions in a shop next to the drugstore for details. After the shaking from the first quake subsided, crowds were watching and pointing to construction cranes on an office building up the street with voices saying, “They’re still shaking!”, “Are they going to fall?”

Asagi Machida (27) a web designer in Tokyo, sprinted from a coffee shop when the quake hit.

“The images from the New Zealand earthquake are still fresh in my mind so I was really scared. I couldn’t believe such a big earthquake was happening in Tokyo.”

The US Geological Survey earlier verified a magnitude of 7,9 at a depth of 24km miles and located the quake 130km east of Sendai, on the main island of Honshu. It later upgraded it to 8,9.

A police car drove down Hitotsugi Street, lights flashing, announcing through a bullhorn that there was still a danger of shaking.

Japan’s north-east Pacific coast, called Sanriku, has suffered from quakes and tsunamis in the past and a 7,2 quake struck on Wednesday. In 1933, a magnitude 8,1 quake in the area killed more than 3 000 people. Last year fishing facilities were damaged after by a tsunami caused by a strong tremor in Chile.