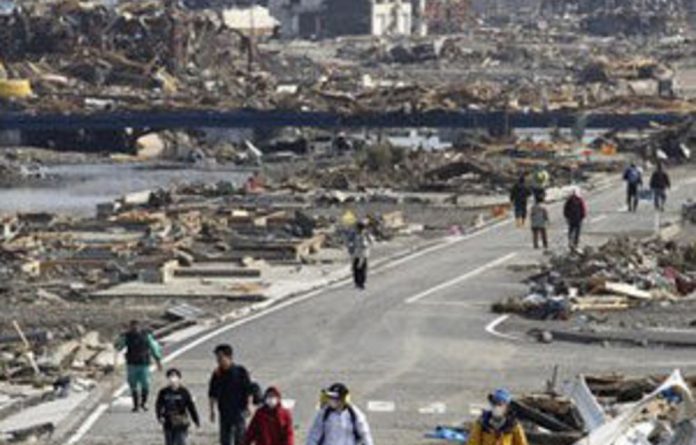 Japan scrambled to avert a meltdown at a stricken nuclear plant on Monday after a hydrogen explosion at one reactor and exposure of fuel rods at another, just days after a devastating earthquake and tsunami that killed at least 10 000 people.

Roads and rail, power and ports have been crippled across much of Japan’s north-east and estimates of the cost of the multiple disasters have leapt to as much as $170-billion. Analysts said the economy could even tip back into recession.

Japanese stocks closed down more than 7,5%, wiping $287-billion off market capitalisation in the biggest fall since the height of the global financial crisis in 2008.

Rescue workers combed the tsunami-battered region north of Tokyo for survivors and struggled to care for millions of people without power and water in what Prime Minister Naoto Kan has dubbed his country’s worst crisis since World War II.

Officials say at least 10 000 people were likely killed in the 8,9-magnitude earthquake and tsunami that followed it. Kyodo news agency reported that 2 000 bodies had been found on Monday in two coastal towns alone.

“It’s a scene from hell, absolutely nightmarish,” said Patrick Fuller of the International Red Cross Federation from the north-eastern coastal town of Otsuchi. “The situation here is just beyond belief, almost everything has been flattened. The government is saying that 9 500 people, more than half of the population, could have died and I do fear the worst.”

Fear of major radiation leak
The big fear at the Fukushima nuclear complex, 240km north of Tokyo, is of a major radiation leak. The complex has already seen explosions at two of its reactors on Saturday and on Monday, which sent a huge plume of smoke billowing above the plant.

The nuclear accident, the worst since the Chernobyl disaster in the Ukraine in 1986, sparked criticism that authorities were ill-prepared and the threat that it could pose to the country’s nuclear power industry.

Jiji news agency said fuel rods at the number two reactor had been entirely exposed and a fuel rod meltdown could not be ruled out. The plant operator confirmed there was little water left in the reactor, adding that the fuel rods may have been exposed.

The rods have now been partially covered by sea water, the reactor’s operator said.

There were earlier partial meltdowns of the fuel rods at both the number one and the number three reactors, where the explosions had occurred.

A meltdown raises the risk of damage to the reactor vessel and a possible radioactive leak. Levels of cooling sea water around the reactor core had been reported as falling earlier in the day. Jiji said the pump had run out of fuel.

Crucially, officials said the thick walls around the radioactive cores of the damaged reactors appeared to be intact after the earlier hydrogen blast.

But the government warned those still in the 20km evacuation zone to stay indoors. The plant operator, Tokyo Electric Power Company (Tepco) , said 11 people had been injured in the blast.

Kyodo said 80 000 people had been evacuated from the zone, joining more than 450 000 other evacuees from quake and tsunami-hit areas in the north-east.

“Everything I’ve seen says that the containment structure is operating as it’s designed to operate. It’s keeping the radiation in and it’s holding everything in, which is the good news,” said Murray Jennex, a nuclear expert at San Diego State University.

“This is nothing like a Chernobyl … At Chernobyl you had no containment structure — when it blew, it blew everything straight out into the atmosphere.”

‘Extreme measure’
Nuclear experts said it was probably the first time in the industry’s 57-year history that sea water has been used to cool the fuel rods, a sign of how close Japan may be to a major accident.

“Injection of sea water into a core is an extreme measure,” Mark Hibbs of the Carnegie Endowment for International Peace. “This is not according to the book.”

Nuclear fuel accounts for 30% of Japan’s electricity. Of Japan’s 54 reactors, 11 have been shut down by the quake.

Switzerland put on hold some approvals for nuclear power plants and Germany cast doubts about its industry after the Japanese disaster, raising questions over the future of the global sector. Taiwan’s state-run Taipower also said it was studying plans to cut nuclear power output.

A Japanese official said before the blast that 22 people were confirmed to have suffered radiation contamination and up to 190 may have been exposed. Workers in protective clothing used hand-held scanners to check people arriving at evacuation centres.

US warships and planes helping with relief efforts moved away from the coast temporarily because of low-level radiation. The US Seventh Fleet described the move as precautionary.

No power, no water
Almost two million households were without power in the north, the government said. There were about 1,4-million without running water. Tens of thousands of people are missing.

The town of Otsuchi in Iwate prefecture was obliterated.

“After my long career in the Red Cross where I have seen many disasters and catastrophes, this is the worst I have ever seen. Otsuchi reminds me of Osaka and Tokyo after the Second World War when everything was destroyed and flattened,” Japan Red Cross president Tadateru Konoe told Reuters during a visit to the coastal town.

Whole villages and towns have been wiped off the map by Friday’s wall of water, triggering an international humanitarian effort of epic proportions.

“When the tsunami struck, I was trying to evacuate people. I looked back, and then it was like the computer graphics scene I’ve seen from the movie Armageddon. I thought it was a dream; it was really like the end of the world,” said Tsutomu Sato (46) in Rikuzantakata, a town on the north-east coast.

Enormous economic costs
Estimates of the economic impact are only now starting to emerge.

Hiromichi Shirakawa, chief economist for Japan at Credit Suisse, said in a note to clients that the economic loss will likely be about 14-trillion to 15-trillion yen ($171-billion to $183-billion) just to the region hit by the quake and tsunami.

Even that would put it above the commonly accepted cost of the 1995 Kobe quake, which killed 6 000 people.

The earthquake has forced many firms to suspend production and shares in some of Japan’s biggest companies tumbled on Monday, with Toyota dropping almost 8%. Shares in Australian-listed uranium miners also dived.

“When we talk about natural disasters, we tend to see an initial sharp drop in production … then you tend to have a V-shaped rebound. But initially everyone underestimates the damage,” said Michala Marcussen, head of global economics at Société Générale.

Global companies from semi-conductor makers to shipbuilders faced disruptions to operations after the quake and tsunami destroyed vital infrastructure, damaged ports and knocked out factories supplying everything from high-tech components to steel. — Reuters

In the past few weeks, nature has expanded into the spaces we have ceded by going into isolation
Read more
Advertisting
Continue to the category
Coronavirus