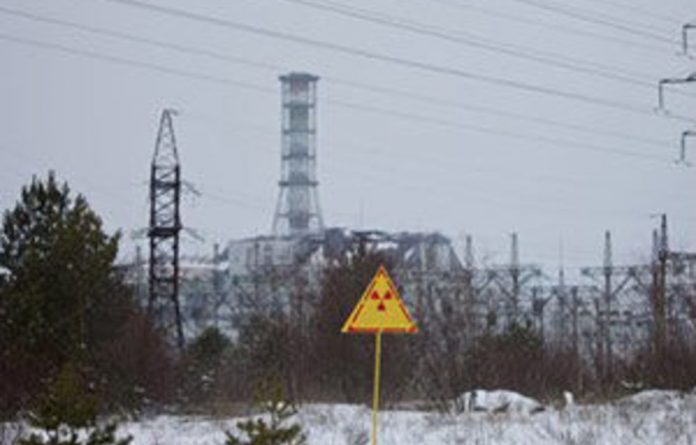 Ganna Konstantynova (77) lives just 18km from the site of the world’s worst nuclear disaster, but happily goes mushroom-picking and grows vegetables in her back garden.

She is among hundreds of mainly elderly Ukrainians who live within the restricted region around the Chernobyl nuclear plant, eking out a surprisingly bucolic existence and dispelling the area’s reputation as a dead zone.

“I live very well in Chernobyl,” the orange-headscarved septuagenarian said.

“The air here is good, the river is nearby, everything is as it should be. The grass smells good and in summer everything is in bloom.”

Her comments come as a surprise to visitors who have to sign promises on entering the restricted area — which fans out in a 30km radius around the plant — not to touch greenery or facilities or smoke or eat in the open air.

With a month to go before the 25th anniversary of the world’s worst nuclear disaster, attention has been thrown back on Chernobyl amid the risks from the quake-hit Fukushima nuclear plant.

‘Eat everything and fear nothing’
Ganna is one of just 270 elderly Ukrainians who live within the exclusion zone in a defiance of an official ban on living in the contaminated area — a ban the authorities have long stopped bothering to enforce.

She and her fellow doughty folk may live on the fringes of atomic catastrophe but pride themselves on their relatively normal lives, and the concerns over a nuclear fallout in quake-hit Japan will not change her mind.

When reactor number four of the Chernobyl nuclear plant exploded on April 26 1986, strewing lethal radiation over a wide area, the Soviet authorities evacuated Ganna and all 130 000 people living within the 30km radius.

But this did not stop her coming back to her little green wooden house within just a month and never leaving since.

“The grass smells good, everything is in bloom over the summer. We eat everything that comes from the forest, berries, mushrooms,” said Ganna.

“I do not feel the radiation. I grow tomatoes, cucumbers and potatoes. I eat everything and fear nothing.”

“Many people who were evacuated died. But I am still alive!”

Normal levels of radiation
The town of Chernobyl is gearing up for the approaching anniversary of the disaster with workers sprucing up buildings, setting up a park and creating a museum that will open in time for the event.

Not everyone in the zone are robust pensioners. About 7 500 Ukrainians work in the area on a shift basis and their salaries are believed to be roughly twice the Kiev average.

Of these, about 3 500 people are employed at the plant and the others are firemen, foresters, scientists and builders working on different projects in the zone.

Oleg (30) has worked for a state company at Chernobyl for five years, but on a special regime of 15 days working inside and then 15 days at home outside the restricted zone.

“The only security precaution is we do not go walking where we should not. But sometimes we do that as well. We eat everything, including fish and sometimes mushrooms.”

Sharing the secrets needed for living in the zone he said that it is best “to go fishing in running water and not in still pools”.

He does not carry a Geiger counter, saying he knows he is not receiving more than the authorised norm of radiation.

“Every year we undergo a test to determine the levels of radiation inside the body. If you have eaten too much fish or mushrooms you might go over the limit.

“Once I was too high. The doctors told me to come back in a few months. And the levels went back to normal.”

Dying village
Vira, another young employee in the zone, works the same routine but takes greater care than her male colleague, refusing to eat food grown locally and only eating what is brought in from outside.

But even she is more relaxed than before and it remains to be seen if her caution will last once she has spent years working in the zone.

“When I came to Chernobyl, I had so many prejudices. I did not walk on the grass, I did not touch any vegetation.”

“But then I learned that the level of radiation at Chernobyl does not exceed the norm and staying here, even for a prolonged period, does not represent a danger,” she said.

For pensioner couple Maria (73) and Ivan (75) who live in the village of Parychiv, also in the exclusion zone, the lack of information over Japanese nuclear risk has brought back memories of the 1986 disaster.

“We were told nothing. That day, we planted apples at the collective farm. Then the authorities said that people would only be evacuated for three days an no one thought it was serious.”

Despite the trauma of April 1986, they returned home two years later and today enjoy mushroom-picking in the forest and even make wine with local fruits, a glass of which they offer guests.

But the village of Parychiv is literally dying. Houses have been abandoned and roofs are collapsing, but a World War II memorial still stands in the centre.

Before the catastrophe 400 people lived in the village, now there are just nine. — Sapa-AFP

President Donald Trump's historic impeachment trial begins in earnest on Tuesday in the Senate, with Democrats calling for his removal from...
Read more
World

The Senate impeachment trial of US President Donald Trump is likely to begin in seven days with key players sworn in later this week,...
Read more
National

EXPLAINER: What’s happening in the Middle East — and what does it mean for Africa?
Read more
World

As Washington overpromises and underdelivers, regional powers are seeking solutions on their own — both through violence and diplomacy
Read more
Advertising
Continue to the category
Politics