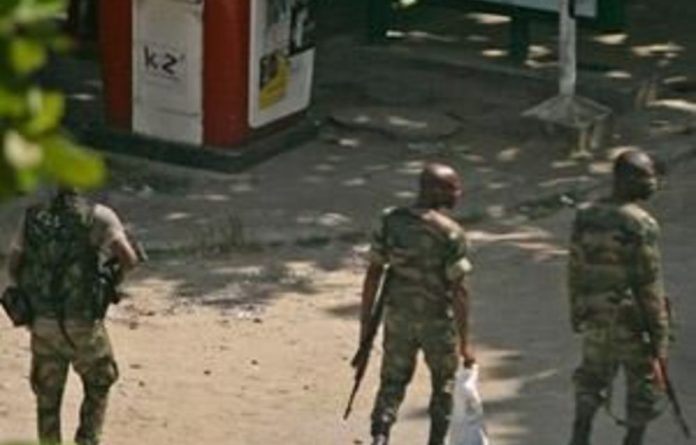 The offensive by UN and French forces that began on Monday included air attacks on the presidential residence and three strategic military garrisons, marking an unprecedented escalation in the international community’s efforts to oust Gbagbo. He was declared the loser of elections in November but refused to cede power to winner Alassane Ouattara even as the world’s largest cocoa producer teetered on the brink of all-out civil war.

Ivorian fighters loyal to Ouattara had succeeded in taking nearly the entire countryside in just three days last week, but they faltered once they reached Abidjan, country’s largest city where the presidential palace and residence are located.

With the help of international forces, the fighters have pushed their way to the heart of the city to reach Gbagbo’s home. Fighting continued on Tuesday morning.

Ouattara’s ambassador to France said Gbagbo is negotiating his surrender.

Ali Coulibaly did not provide any details in the interview on Tuesday with France Info radio or say where he got the information.

“I’m not trying to be demagogical or to add to the disinformation, but according to the information that I have, he’s negotiating his surrender because he has realised the end is near. The game is up,” Coulibaly said.

A senior diplomat who could not be named because of the sensitivity of the matter said he has a map with blue stickers marking the six strategic points that needed to be taken out, and that five of the six had been hit by early on Tuesday.

The five include Gbagbo’s residence where heavy weaponry was destroyed, the republican guard, state TV, the Akban paramilitary base, and the arms depot at Akouedo which the diplomat said were bombarded by UN Mi-24 helicopters. A video posted on YouTube showed the depot being bombed, with spectacular secondary explosions occurring and possible outgoing fire seeking out the raiding aircraft.

Bunker
At Gbagbo’s residence, the troops has created a perimeter around the building, waiting to see if he would come out or respond. Ouattara’s adviser said that he had been told Gbagbo had created a bunker inside his residence, locked from within.

UN peacekeeping chief Alain Le Roy briefed the Security Council about the action in Côte d’Ivoire on Monday and said international forces had targeted areas around the presidential palace where Gbagbo’s forces were using heavy weaponry.

“There is no point to firing at the presidential palace if there are no heavy weapons,” he said. “But we are seeing the heavy weapons very close and that is what we are firing on.”

Post-election violence has left hundreds dead — most of them Ouattara supporters — and has forced up to one million people to flee. Ouattara has used his considerable international clout to financially and diplomatically suffocate Gbagbo and pro-Ouattara forces before launching a dramatic military assault last week.

On Monday, the UN fired on the Akouedo military base at about 5pm to prevent Gbagbo’s forces from using heavy weapons against civilians, said the spokesperson for the UN Department of Peacekeeping Operations Nick Birnback.

Explosions resonated from the city’s downtown core a few blocks from the presidential palace and near the base of the republican guard, and those living nearby barricaded their windows with mattresses. Flames could be seen licking the sky above the home of the staunchly pro-Gbagbo republican guard.

Just after the UN announced their attack, a resident in the Cocody neighbourhood where Gbagbo lives in Abidjan said he saw multiple helicopters circling and could hear firing. Others said they heard what sounded like fighter jets.

French President Nicolas Sarkozy said in a statement that he had authorised the 1 600-strong French Licorne force based here to help in the operation following an appeal from UN Secretary-General Ban Ki-moon, who said that the use of force was necessary to prevent further attacks on civilians.

Food shortages
Côte d’Ivoire gained independence from France in 1960, and about 20 000 French citizens still lived there when a brief civil war broke out in 2002. French troops were then tasked by the UN with monitoring a ceasefire and protecting foreign nationals in Côte d’Ivoire, which was once an economic star and is still one of the only countries in the region with four-lane highways, skyscrapers, escalators and wine bars.

Following four months of attempts to negotiate Gbagbo’s departure, the UN Security Council unanimously passed an especially strong resolution giving the 12 000-strong peacekeeping operation the right “to use all necessary means to carry out its mandate to protect civilians under imminent threat of physical violence … including to prevent the use of heavy weapons against the civilian population”.

Gbagbo (65) has stubbornly refused every olive branch extended to him since last November, when he lost the presidential election to International Monetary Fund economist, Ouattara. Gbagbo insisted he had won, even though his country’s own election commission declared him defeated and the United Nations certified his opponent’s victory.

Many people in Abidjan have not left their homes since last Wednesday, when Ouattara’s fighters arrived on the perimeter of the city, and heavy clashes ensued.

Barricaded inside her home, new mother Joceline Djaha (24) said by telephone that she had stopped eating two days ago, when her stock ran out. For several days, her only food was boiled spaghetti — no sauce.

In the two days since she’s been out of food, her breast milk dried up. Her one-year-old, she says, has become listless.

“Please let this stop,” said Djaha. “I can hold out without food. But I’m not sure my child can.”

In a statement, the organisation said a team of its doctors had been trapped since Thursday “due to the extremely dangerous conditions” at the only hospital still functioning in the northern half of the city, which includes Gbagbo’s residence.

They were treating 30 to 40 injured people daily, who made their way to the hospital by cart or other means, but gunfire and looting prevented helping others.

“We get telephone calls asking us to come pick up wounded people and patients, but it’s impossible to move around,” said Dr Sal-ha Issoufou, head of the doctors’ mission in Abidjan. – Sapa-AP