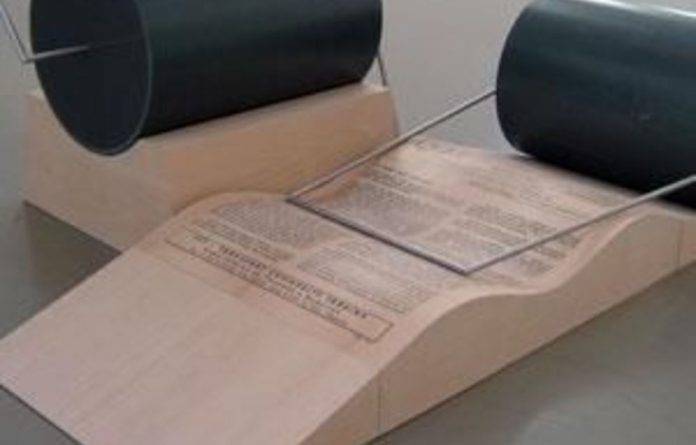 It is a rare and affirming experience when your writing sparks feedback from readers, so I was thrilled with the response to an article I wrote late last year to mark the 10th anniversary of the assassination of Mozambican investigative journalist Carlos Cardoso.

“We don’t know each other, I hope you do not mind me making direct contact,” began the intriguing email I received from Angela Ferreira, who introduced herself as a Mozambican-born visual artist based in Lisbon.

“I read your very evocative piece in the Mail & Guardian [‘In memory of Mozambican media legend’, December 3-9 2010],” she wrote. “I was deeply moved by the article and have been dwelling on it ever since, thinking about how it might inform an art work that pays honour to Cardoso’s many contributions.”

What kind of art work was Ferreira pondering? It turns out she’s a prominent exponent of installations: a way of arranging objects in a manner that evokes sculpture, architecture, design and print, and often incorporates movement and sound. Ferreira’s installations are shown in galleries in Europe and Africa, and she represented Portugal at the 2007 Venice Biennale.

Her reason for making contact was to get permission to use my article as one of the objects that would form part of the work she was conceptualising. What she read had served as her starting point: “It helped me decide to draw attention to Cardoso and his varied and human interests in life and work.”

Work in progress
What Ferreira came to call “this conversation of ours” didn’t end with the granting of permission to use the newspaper clipping in her installation. She shared her early ideas for this work in progress — it would feature a series of floor sculptures loosely based on the mechanics of the fax machine.

She had learned from my article how Cardoso had seized upon the fax, when it first arrived in Africa in the early 1990s as an effective way of disseminating his daily newsletter throughout Mozambique, regionally and internationally.

“I chose to focus on the fax machine because, for me, MediaFax became the most symbolic of Cardoso’s contributions,” Ferreira wrote in her next email. Hence the attempt “to highlight sculpturally his inventive and resourceful spirit, which to my mind was about bringing together his need to communicate on his terms and the use of the technology which was available to him and his readers, thereby bypassing the powers of censorship”.

Cardoso had a collaborator in developing his plan to harness incipient fax technology — his close friend, bestselling author Henning Mankell. Since the 1980s Mankell has divided his time between his native Sweden and his adopted home in Mozambique, where he collaborates with a Maputo theatre group.

New technology
“I can tell you that the first fax machine that was used by Carlos and his colleagues I carried with me from Sweden, where I bought it,” Mankell wrote in an email from the United States, where he was on tour promoting The Troubled Man, the final novel in his Detective Wallander series. “I believe that I was one of the first who Carlos approached to explain his idea.”

Mankell said that he might not have “understood the genius of his idea” immediately but soon came to appreciate it. He now felt honoured to have helped Cardoso kick-start the country’s first independent daily delivered by fax. (Five years later Cardoso founded Metical, distributed via the then new technology of email.)

“I think he got a loan from the Norwegian embassy to then buy fax machines and computers [for MediaFax],” Mankell said, noting that this reporter, who made his name — and lost his life — because of his anti-corruption investigations, “paid the loan back on time”.

Ferreira’s first step in the installation was to ferret out an old fax machine that was gathering dust in a cupboard in her family’s house. She then “analysed it formally”, that is, she took it apart.

Ferreira’s solo exhibition, Carlos Cardoso: Straight to the Point, is on at Galeria Filomena Soares in Lisbon until late May. It features articles from MediaFax transcribed on to wooden sculptures that interpret the workings of the fax machine.

Cross-continental exchange
She learned from my article how Cardoso’s critical journalism led to him losing favour with the government-run media during the late 1970s, resulting in his transfer from Radio Mozambique’s news department to drama. So she created a radio tower for her exhibition that plays recordings of Cardoso acting in the dramas he wrote. (During a period of disillusionment with Mozambican journalism 20 years later, he turned to visual art and held some exhibitions of his unique crayon-based works.)

Carol Brown, the Durban-based international art and museum curator, said: “This installation, which had its birth in a newspaper article, has led to a remarkable cross-continental exchange, bringing Cardoso’s life and work to greater public attention.

“Ferreira has enabled a real, pal­pable, often-forgotten object of historical importance (the fax machine) to carry a message to us. It reminds us of the power of media to constantly adapt itself in different ways and times to keep channels of communication open.”

Ferreira’s next exhibitions will be in South Africa, at the Michael Stevenson Gallery in Johannesburg in April and in Cape Town in May. She originally produced the installation, titled Cape Sonnets, for a public art project in the Austrian city of Graz. It focuses on links between South Africa and Austria through the Afrikaans poet Peter Blum.

Charismatic revolutionary,
My conversation with Ferreira continues, with her latest email, reporting the public’s response to the Lisbon exhibition. She said the newspaper article that sparked it all caught the eyes of visitors to the show because of the photograph used — a shot of Cardoso holding his baby son, Ibo Cardoso Berg. “It was constantly mentioned by visitors to the show that it was amazing that Carlos was such a powerful and charismatic revolutionary, and yet so attractive and sensitive in his portrait as a father.”

I spoke by phone to Berg, now 21 years old and living in Copenhagen His Norwegian mother, Danish stepfather, he and his sister moved there after Cardoso’s assassins, after years of prosecution, were finally convicted and jailed.

Fluent in Portuguese, Norwegian and English, Berg said he appreciated the way in which the exhibition showcased both sides of his father — the journalist who pioneered MediaFax and the artist who wrote drama and poetry, played guitar and painted.

“But I didn’t lose a journalist or an artist — I lost a father, and I think of him every day,” Berg said.

In memory of Mozambican media legend