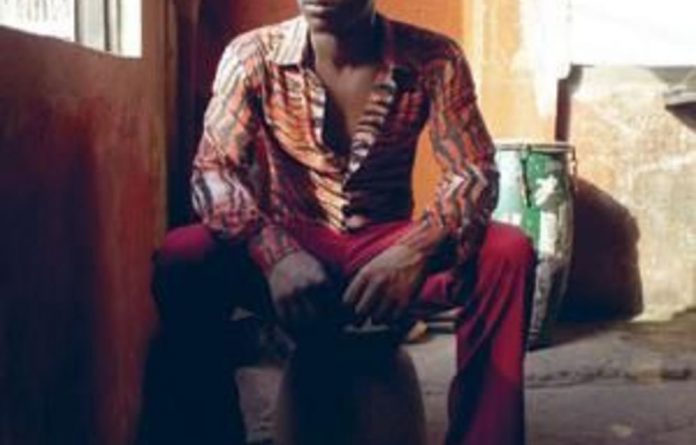 Over the course of a one-hour interview, Seun Kuti talks — engagingly, entertainingly, animatedly, often hilariously — about a range of subjects.

He talks about religion (“Do I believe in God? Of course not! Don’t be stupid!”), about his love of Arsenal (“We need a few taller players”), about working with Brian Eno (“A musical genius. He is not Brian Eno for nothing”), about spending time in Paris (“Can I speak French? Not much. Enough for the ladies”), and about events in the Middle East (“The West will make fools of themselves in Libya, mark my words”).

He also, inevitably, talks about his father. Seun (pronounced Shay-oon, an abbreviation of Oluseun), is the youngest son of the late, great Fela Kuti, and the one seen as Fela’s anointed successor. He first guested on stage with his father aged eight (at the Harlem Apollo, of all places) and inherited Fela’s Egypt 80 big band at the age of 14 when his father died.

When he tours the United Kingdom this month, Kuti (27) will be fronting a band that has been going, in various iterations, for nearly half a century, and still features a dozen survivors from when Fela fronted them.

“My baritone saxophonist Lekan Animashaun celebrates 46 years with the band this year,” says Kuti, proudly. “We have musicians in their 30s, 40s, 50s and 60s. Lekan is 71. In fact, I am the youngest member of the band!”

Tough and wiry, with a premature widow’s peak, a straggly attempt at a beard and a fondness for strutting around the stage naked to the waist, he could probably pass for his father (although he’s a much better saxophone player). He was offered the lead role in Fela! — the musical that took London’s West End and Broadway by storm — but turned it down. “It would just give ammunition to those who say I am copying my father.”

The coward’s way out
Kuti struck out on his own at the age of 19, when he put Egypt 80 on hold and went to England, like his father did, to study popular music and sound technology at the Liverpool Institute for Performing Arts. “For the first time it put me among my peers. I realised I was pretty good at what I did.”

What kind of music did he play in Liverpool? “All sorts. Rock, hip-hop, soul. Stevie Wonder covers. Blondie covers. I played with an African funk band called River Niger. We did a version of Paranoid Android by Radiohead.” He cackles. “Man, you should have heard that!

“My initial idea was to make it in another genre, like hip-hop or reggae. I didn’t want to be continually compared to my dad. Then I realised that was the coward’s way out. I could be a really good Afrobeat star in my own right.”

He is the youngest of Fela’s children, all of whom were fathered with different women. There is talk of a rift between him and his eldest brother, Femi, who has also pursued a singing career. “It’s not that there is any big rift, it’s just a generational thing. Femi is 22 years older than me. We get on well, we talk a lot, especially about music, but we don’t have much in common.”

He is closer to a half-sister, who is only six days his senior. “It was an unorthodox family life, no mistake,” he smiles. “And my dad was not a conventional man.”

A great education
Kuti paints a vivid picture of life in the Kalakuta Republic, the compound where Fela, his band, his dancers, the mothers of his children and sometimes up to 300 other people lived.

“There was no such thing as an average day. My father kept an open-door policy. Anyone could come in or out. We had ex-convicts, killers, doctors, lawyers, professors, electricians, plumbers, as well as many musicians. For many, their lives had gone off the rails. My dad would give these people a job and some money.

“There was real equality. I’d mix with everyone, and learn what they did. It was a great education, better than any university on earth. There was a market where women would sell alcohol and marijuana. Occasionally someone famous, like Shabba Ranks, would drop by with his posse. It was always uptempo, always exciting.”

He remembers many occasions when Nigerian police and military would raid the home.

“One time, a car pulled up, four dudes rolled out and started firing machine guns at the house. Five people died. My father survived. He was asleep on the floor of his room.”

Dictator mentality
Depressingly, Nigeria is still run by the same People’s Democratic Party elite bequeathed by Olusegun Obasanjo, the military leader who clashed with Fela in the 1970s. Kuti has refused to back any candidates in Nigeria’s forthcoming elections (regarding them all as “self-interested frauds”) and is pessimistic about any hopes of progress.

“Every African country is governed by a dictator mentality,” he says. “They give the West their big cuts, they get their own kickbacks, they make money for themselves, they leave the country impoverished, they feel that everything is OK. They are protected.”

Kuti’s new album, From Africa with Fury: Rise (recorded in Brazil and produced in London with Afrobeat obsessive Brian Eno), pulls no punches.
There are attacks on the military, on dictators, on neocolonialists, on multinationals such as Monsanto and Halliburton, and — for light relief — a hymn of praise to marijuana called The Good Leaf.

Kuti has said he’d like to become Nigerian president one day, even trying to register his own political party,

Movement of the People (Nigeria’s ruling elite stopped him, believing — correctly as it turns out — that he was planning to lead an uprising). Is that still an ambition?

“The problem is that if I was president, I wouldn’t be able to criticise myself. I would like to have more of an advisory role.”

Does he have any hope that the Arab uprisings could spread to sub-Saharan Africa?

“That rebel leader in Benghazi, don’t you think his English is a little too … sublime?” he says, slyly.

That’s an outrageous slur! It sounds like a piece of pro-Gaddafi propaganda. “No, not at all,” he says. “In fact, Gaddafi invited me to play for him, in Libya. Unlike your Prince Andrew, I said no. Ha ha! I don’t consort with dictators. But I am on the side of the Libyan people.

Revolution is sacred
“And some of them support Gaddafi. Does that mean the RAF (British air force) should kill them? No. You have to remember that in Libya people get social security. You tell people in Nigeria this, they go crazy!”

So you are opposed to military intervention?

“Listen, blood is shed in revolution. That is why revolution is sacred. And the West must not interfere in this process. I approve of a no-fly zone, but the West has gone too far. Anyway, why isn’t there a no-fly zone in Côte d’Ivoire? Laurent Gbagbo is at least as bad as Gaddafi. Why no intervention in Yemen? Bahrain? Saudi Arabia? All over?”

I suggest to Kuti that the great rock frontman has a touch of the dictator about him. Both control audiences, command fear and loyalty, create hysteria…

“Yes, there is some truth in that. The difference is that people actually like singers.”

Are you as dictatorial a bandleader as your father? Do you fine your band members when they make mistakes?

“I threaten them with that, but I forget to collect the money,” he says. “I shout when they play a wrong note, but they all know my bark is worse than my bite. That is one reason I must stop smoking weed. It makes you very forgetful. Ha ha.” —

The Tiguan R arrives in October but you'll just need to exercise a bit of patience for the Golf 8 R, which arrives in early 2023
Advertising