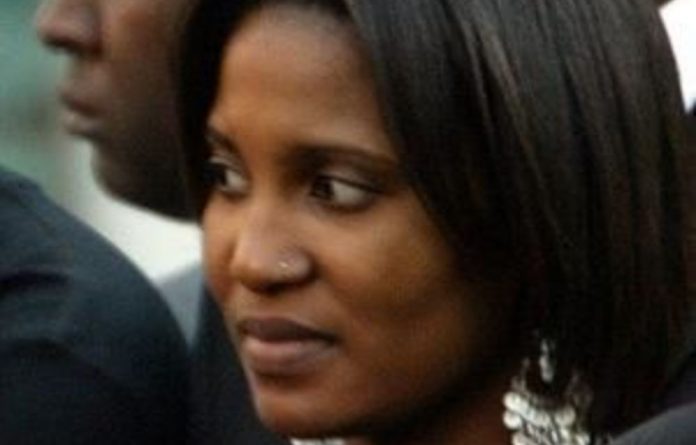 The Sunday Times reported that an army of private security guards, police and the presidential protection unit watched over the Inkwenkwezi Game Reserve near East London in the Eastern Cape, where a giant white marquee had been erected.

The bride (28) wore a white off-the-shoulder wedding gown encrusted with Swarovski crystals, and a pair of silver Christian Louboutin shoes.

She was accompanied by her father and four bridesmaids dressed in red gowns.

Duduzile wore a custom-made diamond necklace worth R1,5-million. She and her bridesmaids were collectively decked out in more than 1 000 diamonds worth R4,5-million.

Members of the SA Police Service were on hand to guard Duduzile’s diamond jewellery — on loan from a top jewellery store — and delivered to her shortly before midday.

Duduzile and her father drove in a minibus from nearby Prana Lodge, where she was staying, to the wedding venue, before hopping on to a white rickshaw.

Guests — who earlier snacked on salmon, chicken, lamb and fruit — were waiting to greet the bride as the rickshaw came to a stop outside the marquee.

Near the entrance, a framed photograph of Duduzile’s mother, Kate Mantsho, stood on a stand in front of a candle. Mantsho committed suicide in 2000.

The service was conducted by Pastor Alph Lukau, from Alleluia Ministries International, and guests were entertained by Nigerian gospel artist Uche Agu.

The groom (31) wore a cream suit and matching bow tie. Elephants roamed the grounds in the background as the couple exchanged vows.

Instead of gifts, the bridal couple requested gift vouchers for a variety of high-end stores.

The couple sold the rights to the wedding to a local magazine, which helped to foot the massive bill.

The couple met three years ago when Duduzile was on the board of Gupta-owned Sahara Computers.

The president’s daughter first hit the social spotlight after throwing a R400 000 birthday bash for 600 of her closest friends two years ago, the Sunday Times reported. – Sapa