Zuma: Don’t throw away your vote 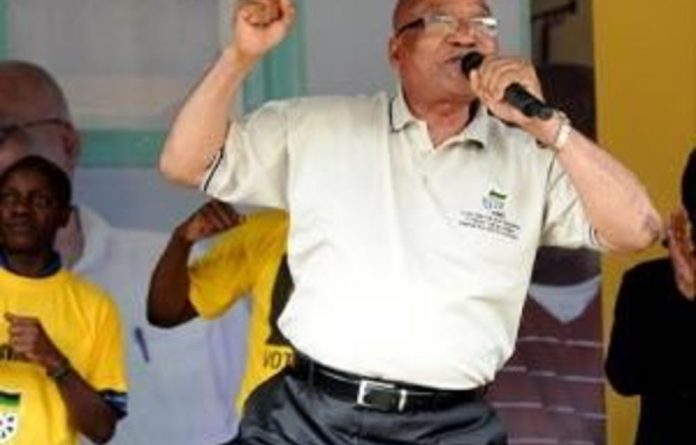 President Jacob Zuma on Tuesday urged thousands of ANC supporters in Soweto not to “throw away their vote” during the May 18 local government elections.

Speaking in Zulu, Zuma said it was important to vote for a party that was going to win. Any other vote would be a “silent vote”.

“Die tyd het gekom [the time has come],” Zuma told ANC supporters at the Hector Pieterson memorial during the start of the party’s election campaign.

Zuma was accompanied by ANC MP Winnie Madikizela-Mandela and other ANC officials.

During his visit to Jabulani Mall in Soweto, a group of supporters were seen wearing t-shirts with slogans reading “I can’t ‘Cope’ without my ANC”, in reference to the break-away party.

Two double-decker buses were used to ferry supporters around the city.

At Maponya Mall, Zuma lunched with entrepreneur and property developer Richard Maponya. The shopping centre was built and named after Maponya after he entered into a partnership with Zenprop and Investec. It opened in September 2007.

There, a Harley Davidson club with ANC flags attached to their bikes revved engines, waiting for Zuma to address the crowd outside.

During his speech Zuma said councillors were democratically chosen. He urged the young and elderly to cast their vote. Transport would be provided for “grannies” to polling stations, and those with cars needed to help others get to polling stations.

‘Entrenched in apartheid’
Zuma said Cape Town was still “entrenched in apartheid”, and there were also “people who thought” the city took care of its people better than anywhere else. However, Zuma claimed there was no development in Cape Town’s townships. Soweto in comparison, was developing and changing, he said.

Zuma then got the crowd to its feet by singing Awulethu’ Mshini Wami (Bring me my Machine Gun).

Earlier, a councillor from Soweto claimed Maponya Mall had been built only because of Zuma and the ANC.

“We are very much happy that our president is here [in Soweto] … Maponya Mall is an ANC development,” councillor Vusisiwe Phiri claimed.

“He has touched the lives of many people in this country. Just look at this mall. Before we had to go into town in order to shop and go to the movies. The ANC has delivered.”

Ambe Special Masekobe, also a councillor, said the campaign brought back memories of the 1994 elections.

“This reminds me of the first time that I ever saw and heard a democracy.”

Masekobe said she had been following Zuma around Soweto since Tuesday morning.

Teenagers Kamogelo Gaeonale (15) and Phekho Sefoka (17) had the opposite view. Speaking at the mall after watching a movie, both high school pupils agreed the government made too many promises and was not able to keep them.

“There’s just too many promises, but not enough delivery. Yes, we see him [Zuma] as a role model, but really, where is everything we were promised?” Gaeonale asked.

Zuma, whose schedule ran late through the day, then addressed a rally in Thokoza Park. — Sapa