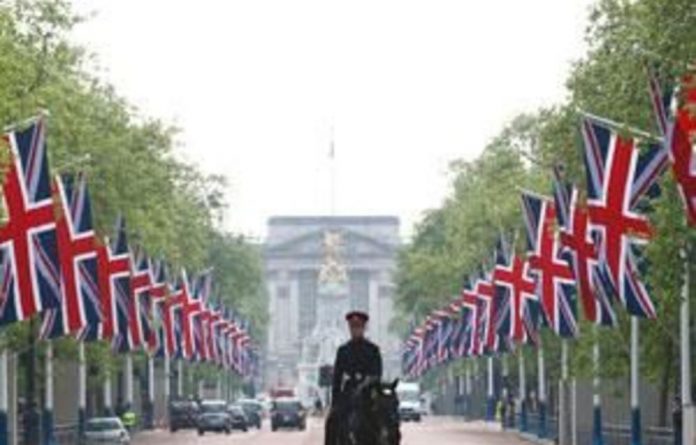 London has prepared for a wedding as if for a funeral, at least if you visit Regent Street. Giant union flags hang vertically, fixed by cables so as not to wave in the breeze, creating a stiff, sad, martial effect that seems more suited to the obsequies of Queen Victoria — or if you really want to be lurid about it, a Nuremberg street party in the 1930s — than to the joyous occasion of matrimony. At least that is how I, as a republican, see it.

For me, images such as the flags on Regent Street live up to dark ideas of monarchy and patriotism as sepulchral re-enactments of the imperial past by a nation trapped in its history. But if republicanism is to survive in Britain it needs to get over such knee-jerk reactions and recognise the visual cunning that is monarchy’s secret weapon.

Royalist newspapers eagerly put photographs of those same red, white and blue flags on the front page, playing to an audience that finds republican reaction hysterical and comic. The royals as little Hitlers? Patriotic bunting as a frigid display of archaic pomp? Come off it, they say, it’s all a bit of fun and no one in their right mind confuses British monarchical grandeur with a threat to liberties.

They are right. When it comes to the British monarchy, the republican eye is the one that doesn’t see straight. It is one thing to sneer at the Regent Street flags as a clumsy display that accidentally, by that stiffening of fabric (like stiffened backs determined to enjoy the royal wedding) looks excessively militaristic. It is another to believe the iconographic misfire means very much. But then, royalists are far more sophisticated about images than republicans, and have been for centuries.

The founding text of modern British monarchism is called Eikon Basilike, meaning the image of the king. It was written by the only British king to have been defeated by republicans, Charles I, and the first copies appeared on the day he was executed, January 30 1649.

The triumph of monarchy in modern Britain dates from that morning. From the moment the axe swung, the seeds of flags, bunting and royal smiles were sown for centuries to come; royalists instantly won the battle of images. The frontispiece to Eikon Basilike showed Charles I as a martyr, kneeling in prayer. He went out of his way to achieve dignity on the scaffold, knowing he must live up to that saintly picture of victimhood.

‘Sublime’ in art
For most Britons ever since it is not monarchy that has been associated with tyranny. It is regicide: Oliver Cromwell and the intolerant Roundheads — that is, republicans. In And When Did You Last See Your Father?, William Frederick Yeames’s classic Victorian painting, a fancily dressed royalist boy faces a grim tribunal of Cromwellian zealots. The Commonwealth cause is identified with state oppression, the dandified royalist side with light and life. Yeames draws on a long visual history of royalism: the boy wears blue, recalling Gainsborough’s 18th-century Blue Boy, in turn a homage to the Cavalier portraits of Charles I’s court artist, Van Dyck.

The most brilliant visual game played by monarchists since the Restoration in 1660 is, however, the belittling of the image of royalty by its own supporters. Republicans think supporters of the royal family must be stupid, but what could be cleverer than giving the people the entertainment of regal spectacle while simultaneously winking that it doesn’t really mean very much?

This is what the British royals have been able to do since the civil war. Artists have been allowed to gleefully satirise the monarchy for centuries: 18th-century prints caricature George III as a farmer and laugh at Hanoverian German accents, yet the same crowds who laughed at the print-shop windows turned out loyally for coronations.

The great Tory thinker Edmund Burke wrote a book about the appeal of the “sublime” in art, arguing that a public execution will always draw a bigger crowd than a play. The French Revolution, was for him, a savage release of irrational instincts.

By contrast, from Burke’s perspective the peaceful ceremonies of Britain’s archaic heads of state are playful, knowing releases of those same human passions. Better red, white and blue on Regent Street than red blood on the paving stones, royalists have argued since 1649. It is an argument they have been winning.

Jonathan Jones writes about art for The Guardian —

What are the various Covid-19 vaccines being used in SA and how well do they work?