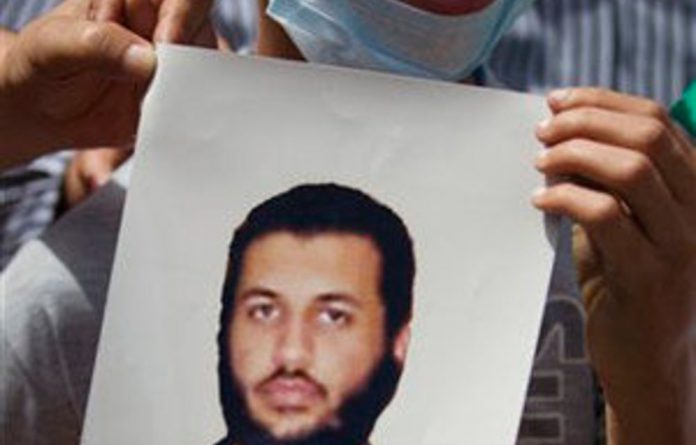 Libyans shouting for revenge have buried Muammar Gaddafi’s second youngest son to the thundering sound of anti-aircraft fire, as South Africa warned that the Nato bombing that killed him would only bring more violence.

Libya’s leader did not attend Monday’s tumultuous funeral of 29-year-old Seif al-Arab, but older brothers Seif al-Islam and Mohammed paid their respects, thronged by a crowd of several thousand. Jostling to get closer to the coffin, draped with a green Libyan flag, mourners flashed victory signs and chanted “Revenge, revenge for you, Libya.”

Three of Gaddafi’s grandchildren, an infant and two toddlers, also died in Saturday’s attack, which Nato says targeted one of the regime’s command and control centers. Gaddafi and his wife were in the compound at the time, but escaped unharmed, Libyan officials said, accusing the alliance of trying to assassinate the Libyan leader.

Nato officials have denied they are hunting Gaddafi to break the battlefield stalemate between Gaddafi’s troops and rebels trying for the past 10 weeks to depose him. Rebels largely control eastern Libya, while Gaddafi has clung to much of the west, including the capital, Tripoli.

Fierce battles have raged in Misrata, a besieged rebel-held city in western Libya, which has been shelled by Libyan forces every day in recent weeks. Records at one hospital showed that at least eight people were killed and 54 injured in shelling on Monday that lasted all morning and for a brief period during the afternoon.

Rebels have repeatedly called on Nato to use more firepower against Libyan troops. “We call on the world to deal with Gaddafi just as they dealt with bin Laden,” said a Misrata doctor, referring to the killing of terror mastermind Osama bin Laden in Pakistan by US forces early on Monday. The doctor only gave his first name, Aiman, for fear of reprisals.

Under a UN mandate, Nato’s role is to protect Libyan civilians, but the international community has increasingly disagreed about what that entails. Western political leaders have called for Gaddafi’s ouster, prompting warnings from Russia, China and others that regime change must not be the objective of Nato’s bombing campaign, now in its second month.

SA: ‘Escalation of tensions’
Responding to the attack on Gaddafi compound, South Africa said on Monday that “attacks on leaders and officials can only result in the escalation of tensions and conflicts on all sides and make future reconciliation difficult.” On Sunday, Russia accused Nato of a “disproportionate use of force” and called for an immediate cease-fire.

South Africa has attempted to mediate between Gaddafi and the rebels, proposing a ceasefire and dialogue. Rebel leaders have said they will only lay down their arms once Gaddafi and his family leave, but Gaddafi has refused.

Since the outbreak of fighting in mid-February, the Gaddafis have made only infrequent public appearances.

In Monday’s funeral, Gaddafi’s two sons Seif al-Islam and Mohammed were surrounded by a crowd of mourners who carried the coffin to a neglected, dusty cemetery where weed and thistles grew amid stone slabs marking graves. From several positions near the cemetery, sustained anti-aircraft fire erupted for several minutes.

Seif al-Islam, viewed until recently by the West as a proponent of reform, stood at the freshly dug grave as the body of his brother was removed from the simple coffin, wrapped in a white burial shroud, and lowered into the ground. Seif al-Islam was dressed in traditional Libyan garb, with a black cap and a black vest over a long white shirt.

About 100m away, small graves had been dug for the Gaddafi grandchildren killed in the bombing.

The bombing has not deterred Gadhafi from keeping up his attacks on Misrata, Libya’s third-largest city with 300 000 people. On Monday, regime forces deployed on the outskirts of the city shelled Misrata, including its port, for several hours, and doctors said 12 people were wounded.

Hundreds have been killed in Misrata during two months of siege by Libyan troops.

In recent days, Gaddafi’s forces have tried to close access to the port, the city’s only lifeline. Last week, Nato vessels spotted Gaddafi’s forces as they tried to lay sea mines along the approaches to Misrata harbour.

Two of the sea mines had been moored to the seabed and were destroyed, but a third mine broke free and drifted off before the mine sweepers arrived. The alliance said its minesweeping ships were clearing the approaches to Misrata harbour on Monday to make sure there were no naval mines left in surrounding waters.

In Misrata, residents are struggling with growing hardships, said Aiman, the hospital doctor.

He said most residents are hosting other families who have fled the shelling. The doctor said he and his brother are hosting a total of five families with more than 45 people, including 25 children. Nearly half the city has no electricity, he said. People have resorted to underground water wells.

The unrest has prompted the UN to withdraw its international staff from Tripoli. Vandals burned the British and Italian embassies and a UN office on Sunday.

Turkey — a Nato member that was serving as an intermediary for the US, Britain and Italy — temporarily closed its embassy in the Libyan capital and sent its staff to neighbouring Tunisia due to deteriorating security, Foreign Minister Ahmet Davutoglu said. The Turkish consulate in rebel-controlled Benghazi, Libya, remains open.

Egypt, meanwhile, sent its first official delegation to Libya to meet with government officials in Tripoli as well as rebel representatives in Benghazi in a bid to “protect innocent civilians and stop the bloodshed,” Foreign Ministry spokesperson Menha Bakhoum said on Monday without elaborating. – Sapa-AP