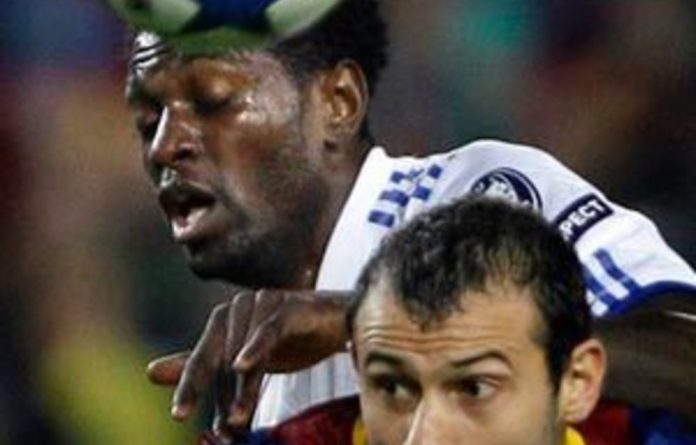 Barcelona reached their second Champions League final in three years after a 1-1 draw with Real Madrid at the Nou Camp in their semi-final second leg clash on Tuesday saw them progress 3-1 on aggregate.

Barcelona could now face Manchester United in a repeat of the 2009 final — which Barcelona won — as they hold a 2-0 lead over Schalke going into Wednesday’s second leg in Manchester.

Needing to overturn a 2-0 home defeat Real had to attack but they never managed a sustained threat on the Barca goal and fell behind to a Pedro strike in the 54th minute.

Marcelo replied 10 minutes later but it was only a consolation goal for Real.

There was debate as to where Real coach Jose Mourinho, suspended from the touchline, would watch the game as at the Nou Camp there is no enclosed area to protect him from the fans. In the end though he chose to stay at the team hotel.

The Portuguese had a final surprise with his team selection as Gonzalo Higuain was chosen to lead the attack over Karim Benzema and Emmanuel Adebayor while Kaka was picked ahead of Mesut Ozil.

For Barcelona as expected Andres Iniesta and Carles Puyol were passed fit with the latter filling in at left back for his 100th Champions League appearance for the club.

The Real players knew that they had to hassle Xavi Hernandez and Andres Iniesta to prevent them finding their passing range but when they did get the ball to Lionel Messi and Pedro they had the pace and trickery to do damage.

Ricardo Carvalho who missed the first leg through suspension went in the book after 11 minutes for bringing down Messi as he tore through the Real half, while there were several other borderline yellow card challenges.

An unmarked Sergio Busquets headed straight at ‘keeper Iker Casillas from a corner but generally the game was simmering and it was Messi who threatened to bring it to the boil in the run up to half time.

The Real defenders were bunching up as they tried to halt his forays and he tested Casillas with a couple of shots from the edge of the area. The shot-stopper then made an excellent stop to deny a curling David Villa strike.

After the break Real attacked with renewed vigour and Barça were looking edgy. In a strange decision by the referee a goal was ruled out for Higuain for a foul by Ronaldo on Mascherano although he himself had been pushed by Gerard Pique.

The slippery conditions were also making it difficult for the Barca defence but the more Real attacked the greater chance they would be caught on the counter-attack and that is what happened.

Dani Alves ran down the wing and played the ball inside to Iniesta who found Pedro with a brilliant through ball and he finished calmly with just the keeper to beat.

The contest looked over but Real kept pushing and got their reward when Marcelo swept the ball home.

Di Maria nutmegged Mascherano and while he was unlucky to see his shot come back off the post, he kept his composure to set up Marcelo.

Barca played out the final minutes in control and there was even the chance for coach Pep Guardiola to bring on defender Eric Abidal in the final minutes. The Frenchman is returning to full fitness after having an operation to remove a tumour from his liver. — AFP