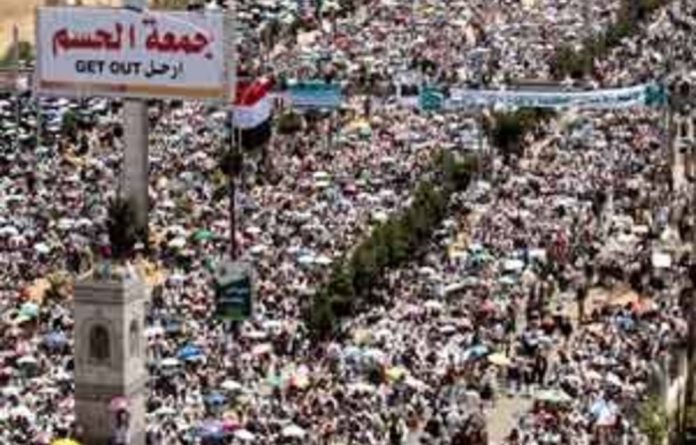 Plain-clothed gunmen opened fire on protesters in Yemen’s southern city of Taiz on Saturday, wounding at least 15 people, witnesses said, and a Gulf envoy arrived to try to revive a plan to end the crisis.

Protesters have been demonstrating across Yemen for months to try to oust President Ali Abdullah Saleh in an uprising inspired by movements that toppled the leaders of Egypt and Tunisia. A plan negotiated by neighbouring Gulf states for Saleh to step down fell through last month when Saleh refused to sign.

The plain-clothed men fired from rooftops in the restive city on protesters who demanded Saleh end more than three decades of rule in the Arab world’s poorest country.

Three people were killed and 15 wounded on Friday when troops shot at protesters in Ibb, a city south of the capital Sanaa. The latest killings pushed the overall death toll since protests began to at least 170.

Saleh, a wily political survivor, has clung to power despite defections from politicians, army officers and tribal leaders.

The secretary-general of the Gulf Cooperation Council, Abdullatif al-Zayani, arrived in Sanaa on Saturday for a three-day visit to try to resurrect the power-transfer deal, which the GCC brokered between Saleh and opposition leaders.

The GCC includes oil-rich neighbours on the Arabian Peninsula who share a stake in stability in Yemen, where the regional wing of al-Qaeda is based.

In the central town of Rada, gunmen shot dead six soldiers and wounded seven in an attack on a checkpoint on Friday, a local official said, blaming al-Qaeda.

Yemen also faces violence from separatists in its south, a tenuous peace with Shi’ite rebels in its north and insecurity resulting from tribalism and poverty.

In remarks published in the Saudi daily Okaz on Saturday, Saleh said that after any transfer of power he plans to go out on the streets as the opposition and “bring down the government again”.

He said the deal which would see him leave office still needed further negotiation.

“There are some clauses in it that are obscure and ambiguous, requiring better clarification through direct talks with the Yemeni groups … in order to reach an agreement on the implementation timeframe that will follow.”

GCC member Qatar pulled out of the plan on Thursday, citing “stalling … continued escalation, and lack of wisdom”. — Reuters