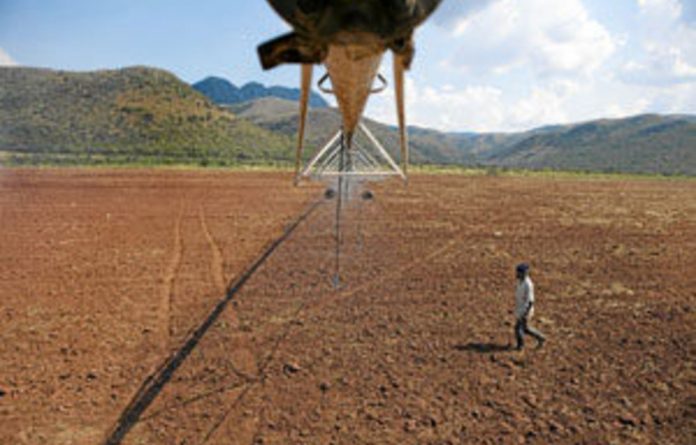 AgriBEE is the lesser- known entity within the broader black economic empowerment family.

Like the rest of the clan it is driven by lofty ideals, including 30% black ownership of the agricultural value chain. It is not clear how this mythical 30% relates to the other 30% redistribution of agricultural land to be accomplished by 2014, as indicated by land policy.

After 17 years of democracy and the promise of a land handover to blacks, only 7% of the land has been redistributed — and it is said that 90% of agricultural development projects on this land have failed. It will take us at least 100 years at the current pace to return the promised 30% of land. In short, the agricultural scene is looking bleak. In this scenario, factor in the shocking news that since about 2008 South Africa has become a net food importer.

The Black Sash has warned that 20% of South Africans suffer an acute lack of food security. At the same time the social cost of food production in this country is very high — farm workers are underpaid, overworked and suffer all kinds of gross human rights violations.

The South African agricultural sector is driven by a racial feudal system under which black workers are mere ­factors of production and the environment is disrespected and harmed. This system can best be described as a primitive commitment to the principle of “profits before people”.

Ironically, AgriBEE was not designed to end this racist and feudal reality in the sector; instead, it sought to “bring in” black players to reap the benefits of slave labour. Conceptually AgriBEE was designed just like other sector charters — in other words, lip service is paid to the question of historical redress and the charter functions as a new avenue of accumulation by politically connected elites who skim the fat off the land.

AgriBEE funds have been siphoned off through blatant corruption — news reports have revealed how money meant for enterprise development has ended up buying soccer teams and being invested in golf courses. AgriBEE, perhaps more than any other sector, shows clearly the main fault lines of the post-1994 economic empowerment project.

First, these interventions do not seek to alter the apartheid pattern of production and accumulation; instead, BEE brings in only a tiny layer of politically connected beneficiaries. The consequences are that apartheid economic structures are sustained and legitimised. Secondly, BEE has increasingly been associated with corruption. What now needs to be acknowledged is that corruption is not an aberration but a constitutive element of our type of capitalism. It is not an invention of black business but an extension and a deepening of the practices of white capital, which mentors and is the inspiration behind black business.

A related element of these legalised thieving practices is the general treatment of black workers, which has not improved under black-owned enterprises. Often it has worsened, as is amply demonstrated by the Aurora mining company case.

AgriBEE was made policy in about 2006 after protracted consultation with the agricultural sector. But its targets are lagging behind and its implementation framework is unclear. This is not the result of incompetence but rather an outcome of the failure to transform the rural sector fundamentally, which means that any implementation of land or agricultural policy is dependent on the mercy of landowners.

Where some progress has been achieved, it has been as a result of initiatives by the white agricultural sector. The monitoring of AgriBEE targets may prove to be as impossible as the inspection of farms by the department of labour, during which government officials have been chased off farms by owners who claimed invasion of private property.

AgriBEE, just like the whole land reform project, is not likely to ­transform the agricultural sector, and this has major social and economic implications. The fact that South Africa has become a net food importer and the food security of the majority is compromised highlights the priorities of the sector: maximisation of profit through exporting produce — to the European Union, in particular. It is ironic that South Africa’s food is produced for ­foreign markets amid a situation of increased food vulnerability.

New values and paradigms are needed if the agricultural sector is to play a different role than the one it now occupies, buttressed by AgriBEE. Power relationships on farms have to be altered through the massive redistribution of land to the landless.

The primary beneficiaries of the agricultural sector’s transformation must be the farm workers to whom the Freedom Charter had promised that “the land shall be owned by those who work it”. It must be a matter of national concern that the direct producers of our food are among the hungriest in our land.

A new paradigm for the sector has to place people before profits and national food security before foreign markets. But such a paradigm is possible only within a national project aimed at disciplining capital to serve the interest of society instead of the owners of the capital — and this is precisely the kind of thinking totally absent among the policymakers of our country.

The agricultural sector is far too important to be left to farmers and politically connected BEE beneficiaries. We need a national discourse about the apocalyptic future we will create if our country continues to be a net food importer in a volatile market with food inflation and environmental degradation. All these factors are exacerbated by the occasional stealing of bread from the tables of the poor by the private sector.

A caring government would pay attention to transforming and securing its agriculture sector so that the people can eat. This transformation is impossible in the present frenzied state of white agricultural moguls, politically connected AgriBEE players and aspirants just aiming to make a quick buck.

Andile Mngxitama is the editor of New Frank Talk