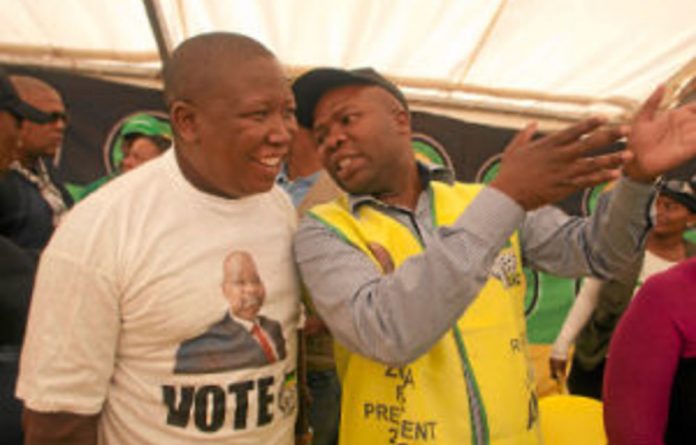 The promise of the covert support of at least five ANC provincial chairpersons made Lebogang Maile, the Gauteng sports minister, decide to take on ANC Youth League president Julius Malema for his job, according to ANC leaders on both sides of the battle.

Maile has had limited success so far in his campaign to unseat Malema, who has the support of most of the regions that have declared their leadership preferences.

But a senior official in the Malema camp said: “The chairpersons of five provinces — Gauteng, Free State, KwaZulu-Natal, Mpumalanga and Eastern Cape have given an instruction to their youth leagues that they should work to secure a win for Maile in the [national elective] conference. But what they don’t understand is those people don’t win conferences, only the delegates are there,” he said.

Maile’s supporters did not deny this, but said they would not reveal any details that might scupper his campaign. They do admit that the support of these high-level ANC leaders helped them “a great deal” in the run-up to the campaign.

The Malema supporter said the reason some provincial leaders were siding with Maile was the ANC’s 2012 presidential campaign.

“These people want Zuma [to remain for a second term]; everything now is about 2012. This is why they [Maile’s supporters] have these levels of confidence that they have,” he said.

“We said to him, ‘chief, you will jeopardise your political career with this thing — let it go’. “He refused and we think it is because he still sees himself as politically senior to Malema,” a source said. Maile was president of the Congress of South African Students (Cosas) while Malema was the Limpopo Cosas leader.

Another Maile backer in Gauteng said he was “brave” to stand against Malema, even if the odds were stacked against him. “Maile is seeing this as a last chance for someone to stand up and defend the real ANC, not the ANC that we have today, where people plunder the state.

“He sees it as his moral duty, even if he knows that he will be defeated,” he said. Most of the branches in Gauteng and KwaZulu-Natal that have declared their choice have favoured Malema.

Maile won the support of the Sedi­beng region, but his lack of support became glaring when his hometown, Alexandra, voted against him.

A Gauteng ANC leader said the provincial leadership was adopting a wait-and-see approach. (They were described as fence sitters for adopting the same approach before the ANC’s elective conference in 2007 — they had refused to choose between Jacob Zuma and former president Thabo Mbeki until the last minute.)

“I think there will be discussion. It is more important to us that the youth league conference proceeds orderly. And if that means the two must sit down and talk then that must happen,” he said.

Although this source is publicly seen as close to Maile, he said the leadership would prefer a compromise where Malema took the presidency and Maile the deputy presidency.

But both camps have rejected this. Maile previously stood as deputy president when Malema was challenged by Free State businessman Saki Mofokeng for the presidency in 2008 and would not want to suffer the same humiliation again.

The provincial congresses of KwaZulu-Natal and Gauteng begin on Friday and will decide on who to back.

Although it is widely expected that Malema will emerge triumphant, Maile’s supporters are convinced that the outcome could be a surprise and might favour their man, which would turn the tide.

No more evictions — for now