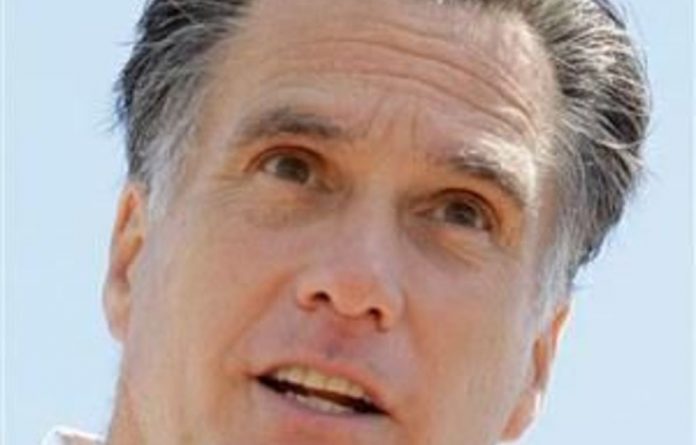 The 64-year-old former Massachusetts governor, who lost out to Senator John McCain for the Republican nomination in 2008, declared his candidacy in New Hampshire, a state that will be key to his electoral chances.

“I’m Mitt Romney, I believe in America and I’m running for president of the United States,” Romney told flag-waving supporters at a carefully choreographed farm event, hay bales serving as the camera-friendly backdrop.

The Boston venture capitalist, who founded a successful management consultancy, made the economy the centrepiece of his campaign, attacking Obama as an inexperienced and profligate manager who had deepened America’s crisis.

“When he took office, the economy was in recession. He made it worse. And he made it last longer,” Romney said, pointing at stubbornly high unemployment, record foreclosures and falling home values.

“The president seems to take his inspiration not from the small towns and villages of New Hampshire, but from the capitals of Europe,” he said.

“With the economy in crisis, his answer was to borrow more money and to throw it at Washington bureaucrats and politicians, just like Europe.”

Romney vowed “experienced leadership and bold action” to turn things around with an ambitious promise to cap federal spending at 20% or less of GDP. His mantra: “Ask tough questions, take on the toughest problems first.”

In 2008, voters “gave someone new a chance to lead; someone we hadn’t known for very long, who didn’t have much of a record but promised to lead us to a better place,” he said.

“Now, in the third year of his four-year term, we have more than promises and slogans to go by. Barack Obama has failed America.”

Powerful fundraiser
For want of an alternative, Romney, a powerful fundraiser with strong name recognition carrying over from his high-profile 2008 bid, is the default frontrunner in the slow-burning race for the Republican nomination.

He does have an obvious Achilles’ heel — his overhaul of the Massachusetts healthcare system looks like a blueprint for Obama’s nationwide reforms, which are loathed by core Republican voters.

Conservatives also have lingering doubts, fuelled by his moderate governing style in deeply liberal Massachusetts, that he truly shares their values.

New Hampshire Democratic Party chairperson Ray Buckley described him as “a wishy-washy, flip-flopping politician who will say anything or take any position to suit his own immediate political needs”.

Romney will also face an uphill battle to overcome deep suspicion of his Mormon faith among the Christian right, many of whom consider the Church of Jesus Christ of Latter-day Saints, as it is officially known, to be heretical.

He first came to political prominence in 1994, when he narrowly failed to unseat leading Democratic senator Ted Kennedy.

In 1999, Romney was brought in to rescue the 2002 Winter Olympics in Salt Lake City, which had become mired in scandal.

Saving the event from financial ruin, he translated the experience into a successful bid for the Massachusetts governorship in 2002.

Romney’s main declared rival is former Minnesota governor Tim Pawlenty, who is banking on a win in Iowa — the first to vote, on February 6, in the state-by-state nomination process — to catapult him into contention.

Two likely contenders are Jon Huntsman, who until recently was Obama’s ambassador to China, and Minnesota Congresswoman Michele Bachmann, a flag-bearer of the conservative and libertarian Tea Party movement.

An ongoing “One Nation” bus tour along the eastern seaboard is fuelling speculation that Palin — who has a canny grass-roots focus and a genius for milking media attention — will jump into the Republican field.

Former House speaker Newt Gingrich, veteran Texas representative Ron Paul and business executive Herman Cain are among a clutch of other declared candidates but none are credited with a strong chance of the nomination.

Topping one recent CNN poll was former New York mayor Rudy Giuliani, who has not ruled out a 2012 bid and was also in New Hampshire on Thursday for a separate Republican fundraising event. — AFP

In 1961, Bill Russell led his fellow Boston Celtics in refusing to play in an NBA game in protest of systemic racism. It happened again on Wednesday.
Read more
Advertising
Continue to the category
Politics