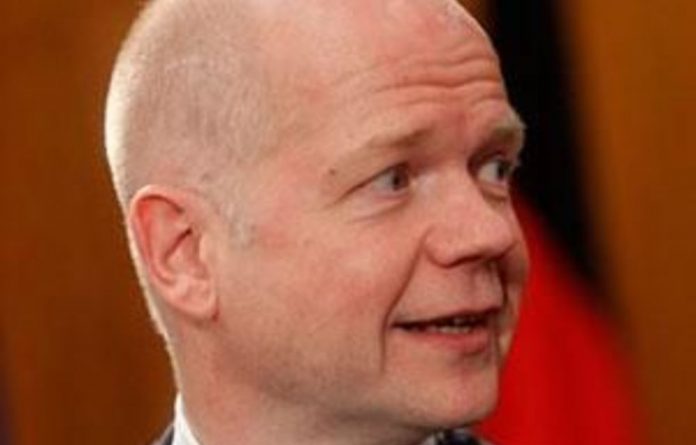 The coalition government in Britain came to office just over a year ago, with a promise to reinvigorate and strengthen the United Kingdom’s bilateral relationships both with its long-standing friends and with the new powers of the global South, whose economic and political weight is increasingly shaping the world.

South Africa, to my mind, falls into both those categories. I was delighted to welcome Foreign Minister Maite Nkoana-Mashabane and a distinguished delegation to London on Thursday for a key meeting of the UK/South Africa Bilateral Forum.

I have been struck, during the year I have been Britain’s Foreign Secretary, by how extraordinarily deep and multifaceted the relationship between the UK and South Africa is. We spent Thursday going over the whole range of the work we do together.

But it is also clear that it is a relationship that is changing. We agreed that we want to transform it, together, into a true partnership over the next few years. We adopted a joint strategy for how to do that. It says a lot, for the breadth, maturity and openness of our relationship that we have been able to agree a really detailed and wide ranging plan, and I’m proud of that.

There are three main areas that I would like to highlight.

The first is our re-affirmation of the commitment we share to double the trade between our two countries by 2015. The UK’s Trade and Investment Minister, Lord Green and South Africa’s Deputy Trade Minister Elizabeth Thabethe had some very productive discussions on specific, high-value business opportunities that will take us a long way towards meeting that target.

The second is climate change and renewable energy. It is an important year for South Africa, and the world, as you prepare to host the major international climate change conference in Durban. Our climate change minister, Chris Huhne, had detailed talks with Foreign Minister Nkoana-Mashabane and Environment Minister Edna Molewa on how we can work to support their efforts to get a result in Durban that will really make a difference. I’m confident they can do that.

The third area and the one the Foreign Minister and I spent most our time together discussing, is foreign policy. South Africa is a key partner on the UN Security Council. Top of our agenda was the ongoing situation in Libya, and indeed other North African and Middle Eastern countries. I explained the UK’s clear position: NATO’s action in accordance with United Nations Security Council’s Resolution 1973 is to protect the lives of Libyan civilians in the face of attack from their own forces. It is not about regime change. Nevertheless, most of the world now recognises that Muammar Gaddafi must leave power if there is to be a lasting, viable solution to the current crisis.

In addition to our cooperation on the UN Security Council, the Foreign Minister and I agreed to work together more closely on counter-proliferation, and on international institutional reform, including a reformed Security Council with permanent African representation; a strengthened Commonwealth; and effective international means to tackle human rights abuse wherever it may occur.

I was delighted with the announcement by our Department for International Development of a £76-million bilateral programme in South Africa to 2015, which is designed to support the South African Government’s efforts to boost growth and jobs, improve health, tackle climate change and reduce violence against women.

I was also encouraged by the decision to establish a joint UK-South Africa Immigration Working Group, to discuss and deliver plans on immigration co-operation, including looking at the visa regime for South African nationals travelling to the UK.

Finally, I was particularly thrilled to see young, dynamic entrepreneurs from our two countries coming together to exchange ideas at our New Entrepreneurs Forum. The futures of our two countries belong to their generation. On the evidence of my engagement with these dynamic young people, it will be in good hands!