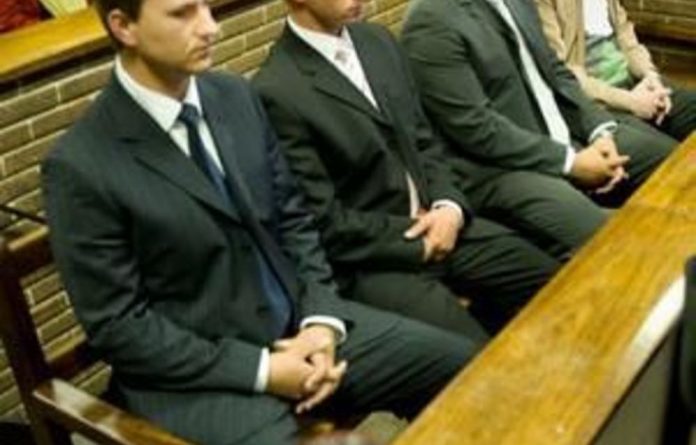 Judgment was reserved by the Bloemfontein High Court on Monday in an appeal hearing by the four former University of the Free State students who humiliated five of its black workers.

The four humiliated five black workers in an initiation-type ceremony in 2007, which they filmed while living at the university’s now-closed Reitz men’s residence.

RC Malherbe, Johnny Roberts, Schalk van der Merwe and Danie Grobler pleaded guilty to a charge of crimen injuria in July 2010 and were each fined R20 000 or 12 months in jail.

They were also sentenced to a further six months’ imprisonment, wholly suspended for five years on certain conditions.

These conditions included that they not be convicted of crimen injuria or crimen defamation during the period of suspension, and that the Equality Court not find that they had unfairly discriminated against anyone else on the grounds of race.

Kemp submitted that, in sentencing them, the lower court focused on aspects outside their guilty plea. He argued that they pleaded guilty to the crimen injuria in the “picture” created by the video and not what had “happened” on the day of the filming.

“The [lower] court did not take the subtle difference into consideration,” he contended.

He said the court was not entitled to look beyond the plea of guilty in considering sentence.

The former students want the high court to drop the six-months suspended sentence and reduce the fine to between R5 000 and R10 000 to bring the sentence in line with comparable cases.

‘No misdirection’
Legal counsel for the state Johan Kruger told the court it should be considered that the video recording formed part of the guilty plea.

He said considering the offence and all the relevant circumstances, there was no misdirection on the part of the trial court on the first part of the sentence of a fine and imprisonment on defaulting.

He submitted that, if the court found against the state, the fines should not be reduced to below R15 000 each.

Kruger also submitted that the suspension of a six-month imprisonment sentence was according to law and could not be argued as misdirection.

Opposing the appeal, the state argued that the sentence imposed was balanced and humane and was blended with the right amount of mercy.

The appeal was heard by Judge MH Rampai and Judge MB Molemela.

Earlier this year, about 300 guests watched when the four students publicly expressed “deeply regret” for their conduct and the harm it caused the workers, the university and the broader community.

At the reconciliation ceremony, the former students said they had failed the workers and now knew that their conduct had hurt them.

“With true remorse and humility, we ask you to forgive us,” Danie Grobler said on their behalf.

The workers accepted the apology.

It followed an out-of-court agreement in separate matters in the Equality Court between the workers and “the boys”, as the former students were referred to at the time, and the university. — Sapa