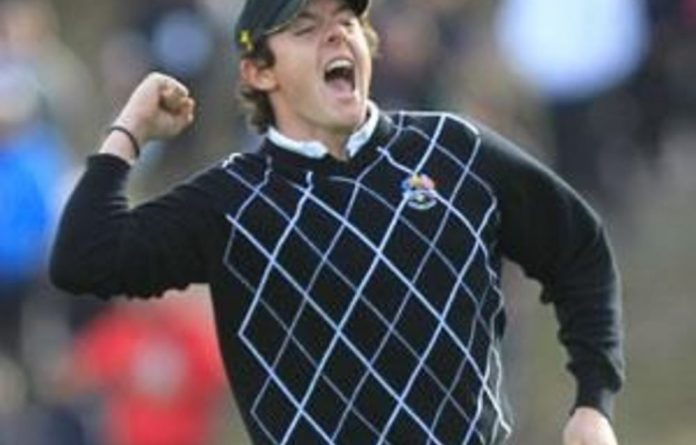 Rory McIlroy buried the memory of his Masters meltdown much in the way he buried the competition at the US Open — with a breath-taking performance filled with the promise of more Majors to come.

Four days of flawless golf at Congressional ended on Sunday afternoon with a two-under 69 to shatter US Open records that simply defy logic at the Major known as the toughest test in golf.

The 22-year-old from Northern Ireland walked off the 18th green and into the arms of his father, Gerry, who worked three jobs so his only son could pursue his passion. Not even he could have imagined a day like this.

At the club in Northern Ireland where Rory McIlroy learned his golf as a kid, they went wild from the very first birdie.

Many pints were sunk and songs sung, including an impromptu “Rory, Rory Hallelujah.” Members of the Holywood Golf Club were glued to the television, almost literally: one man kissed the large screen in the clubhouse’s main bar after McIlroy won the US Open by eight shots.

The club overlooking Belfast Lough bent its rules to let McIlroy in as a member at age seven, because he showed such promise. His father, also a golfer, started taking McIlroy to the club even before he could walk, putting him in a buggy while he practised. He got McIlroy plastic clubs when he was a toddler.

It was the second straight US Open title for the tiny country of Northern Ireland, and defending champion Graeme McDowell walked back across the bridge to the 18th green to embrace the new winner.

“You’re a legend,” McDowell told him.

Not many would dispute that now, after a week like this.

Breaking records
McIlroy finished at 268 to break the US Open record by four shots. That record 12-under par by Tiger Woods at Pebble Beach? McIlroy matched it in the second round and kept right on rolling, finishing at a staggering 16 under.

“I couldn’t ask for much more, and I’m just so happy to be holding this trophy,” McIlroy said. “I know how good Tiger was in 2000 to win by 15 in Pebble. I was trying to go out there and emulate him in some way. I played great for four days, and I couldn’t be happier.”

When he arrived for his news conference, he took a picture of the silver US Open trophy on the table and posted it on Twitter with two words that said it all: Winning. Bounceback.

His freckled-face beaming with joy when he tapped in for par, McIlroy won by eight shots over Jason Day, who closed with a 68 and moved to No 9 in the world. It was the second straight runner-up in a Major for Day, only this time he didn’t have a chance.

No one did this week.

Tributes pouring in
McIlroy opened with a three-shot lead, stretched it to six shots after 36 holes and eight shots going into the final round. No one got any closer over the final 18 holes.

Tributes poured in throughout the steamy afternoon outside the nation’s capital — first from the players he beat, then from Jack Nicklaus and ultimately from Woods.

“What a performance from start to finish,” Woods said in a statement. “Enjoy the win. Well done.”

Nicklaus invited McIlroy to lunch last year in Florida and talked to him about how to close out tournaments. He apparently wasn’t listening when he took a four-shot lead into the final round of the Masters, only to implode on the back nine and shoot 80.

“I didn’t think it was going to happen again, and it hasn’t,” Nicklaus said by telephone to NBC Sports. “I think this kid’s going to have a great career. I don’t think there’s any question about it. He’s got all the components. He’s got a lot of people rooting for him. He’s a nice kid. He’s got a pleasant personality.

And to think that only four days ago, this was being called the US Wide Open with no clear favourite in the game. Woods has gone 18 months without winning and isn’t even playing now because of injuries to his left leg. The top two players in the world have yet to win a Major. There appeared to be no one who stood out in the game.

McIlroy, who goes to No 4 in the world, now stands above everyone going into the final two Majors of the year.

Golf’s next superstar?
Just think: If he had avoided the collapse at Augusta National, he could be headed to Royal St George’s for the British Open with the first two legs of the Grand Slam.

“Nothing this kid does ever surprises me,” McDowell said. “He’s the best player I’ve ever seen. I didn’t have a chance to play with Tiger when he was in his real pomp, and this guy is the best I’ve ever seen. Simple as that. He’s great for golf. He’s a breath of fresh air for the game, and perhaps we’re ready for golf’s next superstar.

Among the records he set in a US Open unlike any other: