Asmal hailed as giant of the liberation struggle 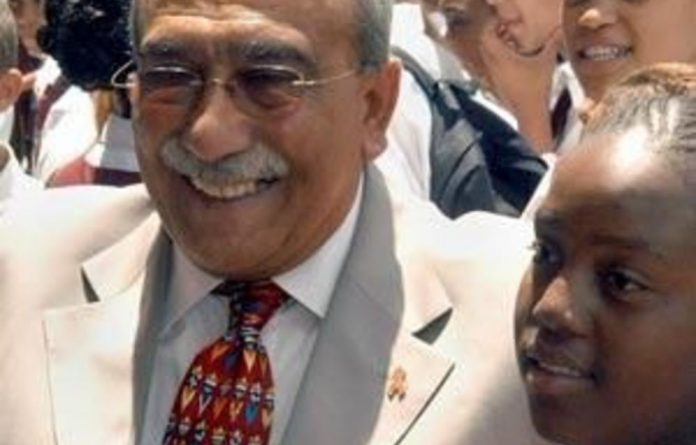 Kader Asmal was a fearless fighter for freedom and human rights and his death had weakened South Africa’s democracy, political parties and civil organisations said on Wednesday after the ANC veteran’s death in Cape Town.

President Jacob Zuma said Asmal made a “sterling” contribution to the struggle for liberation and made sacrifices to ensure the attainment of freedom and democracy.

Asmal was the minister of water affairs and forestry from 1994, a member of the ANC’s national executive committee, and education minister from 1999.

In a statement from his family, spokesperson Allan Taylor said Asmal (76) had suffered a serious heart attack and died while he was in hospital for a stomach ailment.

“Asmal was admitted to the Constantiaberg Medi Clinic on June 17 [in Cape Town] for treatment of a stomach ailment. He was making reasonable progress in a general ward up until late last night [Tuesday] when he suffered a serious heart attack,” said Taylor.

“He was resuscitated and moved to the intensive care unit. Unfortunately he did not regain consciousness and died this afternoon at 4pm.”

Asmal is survived by his wife Louise, his sons Rafiq and Adam, and two grandchildren, Oisín and Zoë.

He will be cremated in a private family ceremony.

The ANC said he was one of the party’s foremost intellectual giants.

Spokesperson Jackson Mthembu said Asmal’s “immeasurable contribution in the liberation of South Africa” ensured that the ANC earned respect from the international community.

‘Best of a generation’
DA leader Helen Zille said Asmal “was far more than a politician”.

“He represented the best of a generation of struggle heroes who made unimaginable sacrifices to realise a democratic South Africa.”

“He served his people and his nation, without a thought of self-enrichment or aggrandisement,” he said.

“He added substance and vigour to whatever he did, from the international anti-apartheid movement, to the negotiations that gave birth to our democratic nation”.

Former president Thabo Mbeki called Asmal an outstanding fighter for the liberation of South Africa and one of the architects of democracy.

“All of us who knew and worked with him … could always depend on him as a steadfast fighter for the liberation and advancement of the interests of all South Africans,” he said.

“I have learned with great sorrow of the death of Prof Kader Asmal. He was one of our new democracy’s founding fathers — and was present at its birth,” De Klerk said in a statement.

“He lent colour, humour and intelligence to our political debate. Almost to the moment of his death he remained a fearless champion of the democratic values that underlie our Constitution. South Africa will miss him.”

“With his death the republic has lost one of the most vigilant custodians of our freedoms and constitutional order, who never feared to speak up on matters of principle,” he said. “One of the greatest independent thinking and outspoken minds has left us.”

“Although we did not always agree with his ideas as the SACP, we respected his intellectual contribution in the task of reconstructing and developing our country,” spokesperson Malesela Maleka said.

ID leader Patricia de Lille said Asmal up until the last week of his life, “he had been fighting for the rights of South Africans”.

“Just a few days ago he encouraged South Africans to stand firm against government’s proposed Protection of Information Bill,” she said.

Cope co-founder Mbhazima Shilowa said he was shocked and saddened by Asmal’s death and described him as an icon and a legend.

“Asmal was one of the very few icons and legends who still upheld the founding values and principles of the democratic movement and the liberation struggle.”

The South African Security Forces Union (Sasfu) described Asmal as a political leader who believed that the rights of soldiers needed to be respected and protected.

“He believed that [by not looking after soldiers’ rights], soldiers will not be able to respect and protect civilian rights,” spokesperson Bhekinkosi Mvovo said in a statement.

“He was never shy to point out to the senior management of the national defence force that their failures to take care of subordinates were putting the national security at risk.”

“He had a passionate love for sport and particularly for cricket. He served on the national executive of the SA Non-Racial Olympic Committee (Sanroc) and, in spite of his commitments to the government from 1994 onwards as a senior Cabinet minister, he did a lot of significant work for cricket,” said CSA chief executive officer Gerald Majola.

“He was one of the giants of the liberation struggle, a true humanist, intellectual, a leading architect of the new constitution, and more recently a passionate and fearless defender of this founding document of democratic South Africa,” the organisation said.

Early years
Abdul Kadera Asmal was born on October 8 1934, to a middle-class family of Stanger (now KwaDukuza) in KwaZulu-Natal.

Asmal later recalled that the decisive moment in his political growth was when he saw footage of Nazi concentration camp victims. That prompted his decision to become a lawyer, so he could oppose the Nazi mentality, which he likened to apartheid.

In his matric year he saw the Defiance Campaign’s leaders marching in prison uniforms through his town’s streets. His response was to lead a stay-away from his school.

After starting his studies for his teacher’s diploma in Durban in 1953, he strengthened his ties with Luthuli, his mentor, who had been banned and restricted to Groutville, near Stanger.

While teaching, Asmal obtained a BA degree through the University of South Africa.

In 1959 he went abroad to study law. He graduated from the London School of Economics four years later.

After qualifying in Britain and Ireland as a barrister, Asmal lectured as Trinity College for 27 years as a law professor, concentrating on labour, international law and human rights, during which time he rose in the estimation and regard of his ANC comrades, who raised him to the party’s constitutional committee from 1986. He became a key member of the ANC’s national executive committee in 1990, when he returned to South Africa.

Asmal was a member of both the London and Dublin bars and obtained two master’s degrees during this time.

Political career
He was a founder member of both the British and Irish Anti-Apartheid Movements, and chaired the latter for nearly three decades.

He also served as vice-president of the International Defence and Aid Fund for Southern Africa from 1968 to 1982, and as president of the Irish Council for Civil Liberties between 1976 and 1990.

He was involved with civil rights campaigns elsewhere in the world, including Northern Ireland and Palestine. Asmal participated in a number of international inquiries into human rights violations.

In 1983 he was awarded the Prix Unesco of the United Nations Educational, Scientific and Cultural Organisation in recognition for his work in the advancement of human rights.

He was elected to the ANC’s national executive committee in 1991 and was one of the party’s delegates to the Convention for a Democratic South Africa (Codesa), as well as the subsequent Multi-Party Negotiating Forum.

In the April 1994 general election, Asmal was elected to Parliament, and was appointed by Nelson Mandela to lead the department of water affairs and forestry, a portfolio he oversaw until 1999, when then-president Thabo Mbeki asked him to serve as minister of education, a position he held until 2004.

Asmal left Parliament in 2008 to take up a post at the University of the Western Cape where he was professor extraordinary in the faculty of law.

This also appeared to mark a move towards greater independence from the ruling party, with Asmal not hesitating to criticise when he believed government was wrong. – Sapa