Dilemma of the humanities 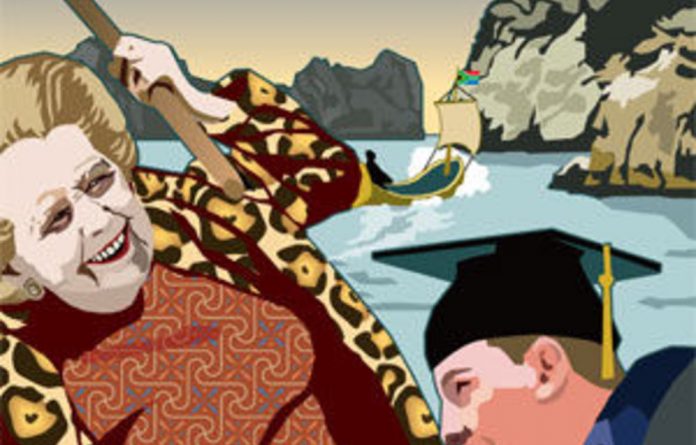 The humanities in South Africa are caught between a rock and a hard place.

The rock is a global higher education policy template which increasingly favours applied science over all other forms of knowledge, inquiry and training, while the hard place is a local one: the hard place of what we might call applied nationalism.

The reality of the rock, and the difficulty humanist educators have in getting round it, can be shown by a single anecdote. Just a year ago, in August 2010, Sir Adam Roberts, the 69-year-old president of the British Academy, set off on a cycle ride from Land’s End to John O’Groats.

The main purpose of the taxing 1 600km ride was to publicly protest against the ongoing series of government funding cuts to the humanities and social sciences. Though Sir Adam did end up accepting around R15 000 in individual contributions along the way, the cuts continued to be made — and continue today –with closures of academically excellent departments such as philosophy at Middlesex University on cost grounds.

A series of reports issued by the academy (which was formed by Royal Charter in 1902 for the “promotion of the humanities and social sciences”) has pointed to a “dangerously polarised debate” in higher education policy. While this policy (the rock) recognises the contribution to society and wealth creation made by the STEM disciplines (science, technology, engineering, mathematics), it fails entirely to acknowledge “the equally important contributions made by the arts, humanities and social sciences”.

How has this polarisation come about? How was this rock formed?

One part of the answer at least is an ideological one: former British Prime Minister Margaret Thatcher’s avowed hatred of all those academics — and notably social scientists and historians — that she saw as “putting out poison” into the public mind, and her determination to curb the university as a site of irresponsible critical thinking. With the Education Act of 1988, Thatcher took the first decisive step in what was to become — over the next 30 years or so — a fundamental reframing of the purposes of higher education.

Through the simple replacement of the University Grants Committee by a new University Funding Council on which, for the first time, academics were outnumbered by business people, Thatcher opened the door to an increasingly instrumental and economist view of the purposes of higher education. The dominant legitimating idea of higher education shifted from a focus on serving the public good to that of simply servicing the economy.

From a commitment to promoting professional training and critical thinking across all disciplines in the sciences and humanities, the central idea of the function of higher education moved to servicing the needs of the economy in as direct and immediate a fashion as possible. In the decades that followed, many critics have pointed to the dangers of too narrow and exclusive a focus on the economy at the expense of the other social functions of higher education.

Higher education serves a variety of complex social needs and interests, and effectively seeking to reduce knowledge to applied science is not only bad for the humanities, but also bad for science, bad for business and, ultimately, bad for the entire social order of which the economy is only a single interactive dimension. The big problems in the real world are complex and tend not to admit of simple solutions.

All the creative resources of thinking in many different disciplines, across the sciences and humanities, are required to face the challenges of climate change, food shortages, migration and HIV/Aids. Every economy has not only to respond to the external challenges posed by the pressures of increasingly global economic and political forces, but the internal challenges posed by social cohesion and integration, intercultural communication and also ordinary translation.

The 21st century is not one that can afford to continue a CP Snow-style of “two cultures” thinking, yet this is the polarised thinking inscribed in much higher education policy, with its substantial division in support for work in the sciences and humanities. The rock then is a substantial one, and certainly the first step in any attempt to get over it is to recognise that it is there.

Similarly, it is time, I think, to try and recognise or identify another set of instrumental pressures that the critical humanities need to resist in the hard place that is present-day South Africa. These pressures — which I shall call the pressures of an applied nationalism — are everywhere apparent in discussions of the future of the humanities, and surfaced in some of the discussions in the charter for humanities group which met in Johannesburg recently to workshop its imminent presentation to the government.

It is worth remembering that charters have historically played a significant role in the constitution and extension of democracy. It was the Great Charter of 1215 that, in setting limits to the arbitrary authority of the king of England, first opened up a space for constitutional democracy. Again in England, the People’s Charter of 1838, with its demands for universal suffrage, secret ballots, payment of MPs and regular recall, established the basic structures of parliamentary democracy.

Similarly, the Kliptown Freedom Charter of 1955, with its declaration that South Africa “belongs to all who live in it, black and white, and that no government can justly claim authority unless it is based on the will of all the people”, set the scene — and many of the key complications — for the democracy to come. The syntax of participation is built into the very form of the democratic charter; it belongs to the people whose rights and duties are constituted in and by it.

The proper grammatical form of the democratic charter is that of subjective genitive, in which the subject — the people — establishes and founds the charter as the people’s charter, a charter based on or emanating from the will of all the people. A charter for someone is, grammatically, not quite the same; it rather dictates to a community a prescribed set of rules which constitute the conditions for belonging to that community.

I stress and even perhaps place undue emphasis on this seemingly trivial point of grammar as a way of pointing out that at least some of the draft charter’s proposals and recommendations, as discussed at the recent workshop, continue to subordinate the humanities and social sciences to an instrumental agenda: not, this time, the instrumental agenda of the applied science of the STEM disciplines addressed by the British Academy, but rather that of what we might call an applied nationalism.

The dangers of this applied nationalism were pointed out by Edward Said in a prescient lecture on academic freedom in liberated societies given in Cape Town back in 1991. Here Said argued that universities shouldn’t become the “proving ground for earnest patriots”, and should not seek to “substitute for a Eurocentric norm an Afrocentric or Islamo- or Arabo-centric one”.

Such moves, he warned, threatened to “nullify intellect altogether”, stressing that the intellect “must not be coercively held in thrall to the authority of a national identity”. Much depends here, of course, on quite what a chartered commitment to the “African renaissance” (a dangerous phrase which appears to form a key element in the charter for the humanities) might mean in practice.

On one reading, committing to the project of an African renaissance could simply mean support for the renewal, revitalisation and extension of work across all fields of the humanities by African or South African scholars. Just as recognition of South African achievement in all forms of sport might be a matter of legitimate pride for South Africans, so also might recognition of scholarly achievement across all disciplines, from classics to political philosophy.

And who, after all, would want to do away with soccer because its origins lie in 19th-century Britain?

On another reading, such commitment might mean the undue narrowing down of the legitimate scope of teaching and research in the humanities to African subjects and topics only and exclusively in precisely the manner Said warned against.

The key question here is whether a welcome focus on all the previously excluded elements of African knowledge and culture itself becomes an excluding force, and one that in a monological way promotes the narrow ideological agenda of a particular form of identity politics, or whether it opens and expands, in the dialogical fashion appropriate to the university, the existing horizons of critical thinking and analysis.

Thus, while African languages should be promoted at all levels of the education system, this obviously should not mean instead of teaching, and teaching in, other languages. Instead, a greater emphasis than we have on translation and the difficulties of translation should also be encouraged.

But the temptation — in the hard place of an instrumentalising world — is always likely to be that the quickest defence of the humanities is the simple appeal of an applied nationalism in which justified pride in the local can all too easily give way to a deliberate parochialism. All in all, recent discussions suggest that applied science and applied nationalism make up the Scylla and Charybdis that threaten the humanities in South Africa today.

In my view, it is only by steering carefully between the two that the frail bark of the humanities may hope to preserve the resources of that critical and creative thinking figured in Homer’s Odyssey as that supremely wily and resourceful hero, Ulysses, surely the prototype of the energetic, imaginative and innovative thinking that South Africa actually needs.