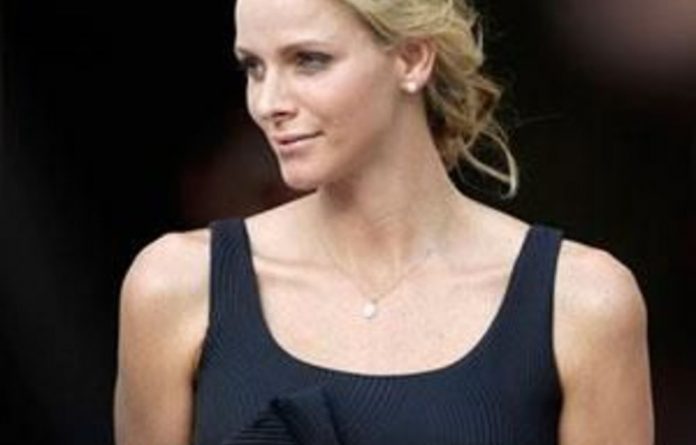 The flags are out, the fireworks are primed and the dress is under wraps — but it took an ugly rumour of a threatened split to put the Monaco royal wedding on the front pages on Wednesday.

Prince Albert II is due to marry statuesque South African swimming champ Charlene Wittstock on Friday in a festival of princely pomp, hoping to save his realm by finally providing it with a legitimate heir.

The 53-year-old former playboy has had children with two previous lovers, but if he cannot procreate within matrimony the Grimaldi clan will be forced to cede Monaco to France and lose a territory they have held since 1297.

All appeared to be going to plan. Charlene’s blonde locks, high cheekbones and impressively broad shoulders have graced the covers of magazines and celebrity guests are converging on the Mediterranean enclave.

The wedding was never going to compete with Britain’s marriage of Prince William and Kate Middleton — now the Duke and Duchess of Cambridge — and the Monaco brand was looking due for a rejuvenating shot in the arm.

But the celebrity press gives, and it takes away. On Tuesday, reports surfaced of a royal falling out. Charlene, it was said, had learned a dark secret about her stocky, balding partner and flown the coop.

One-way ticket home
The 33-year-old was reported by L’Express magazine’s website and a slew of blogs and Twitter postings as having sought a one-way ticket home to South Africa, only to be intercepted in Nice and returned to her gilded cage.

“Albert and Charlene, a marriage in danger,” screamed the headline, above a breathless description of the alleged race to the airport laced with heavy but vague insinuations about the nature of the secret: “Charlene Wittstock had learned a few hours earlier that the private life of the man she was about to marry, who publicly acknowledged in 2005 a child from an adulterous relationship, was not as exemplary as she had imagined.”

An outraged palace firmly denied the tale, the royal couple made a sudden inspection visit to the wedding site to be photographed arm-in-arm and their lawyer announced that he intended to sue for defamation.

One day later, the world’s press was abuzz with the speculation — and, as some cynics noted, also with advance publicity for the event — and lawyer Thierry Lacoste had suddenly abandoned his threat of legal action.

Lacoste told Agence France-Presse he had dropped the case when L’Express agreed to withdraw the article, but it was nevertheless still available on the site, unchanged apart from a brief footnote to acknowledge the princely denial.

Meanwhile, other media had joined in dropping hints about the supposed secret, and raking over the details of the prince’s previous liaisons — including his siring of illegitimate children with at least two women.

South African Olympic swimmer Ryk Neethling told local media Wednesday that “everything is fine” ahead of the marriage.

Neethling, a gold medallist friend of Wittstock’s who is attending the wedding on Friday and Saturday, said he phoned to check on her after the Times called him to confirm rumours that she had tried to leave Monaco.

“I just spoke to her assistant and whatever the story is, it’s not true. I’ll be very surprised if it’s true. I called her and asked if everything is okay, and they said everything is fine,” he told the paper.

Neethling said he was still flying to Monaco for the wedding.

Albert’s mother, US film star Grace Kelly — turned Princess Grace on her marriage to Rainier III — died in a car crash in 1982. Her daughter Caroline lost her second husband, Stephano Casiraghi, in a 1990 motorboat accident.

The other royal sister, Princess Stephanie, has also been unlucky in love, in the words of Wednesday’s edition of Le Parisien “marrying almost as often as she falls in love” and finding herself betrayed by her bodyguard lover.

The clan’s latest experiment in matrimony will begin with a civil ceremony on Friday, followed by a concert by electro-pop veteran Jean-Michel Jarre, then on Saturday by a Catholic religious ceremony and grand ball.