New wave of fury puts the heat on Zuma 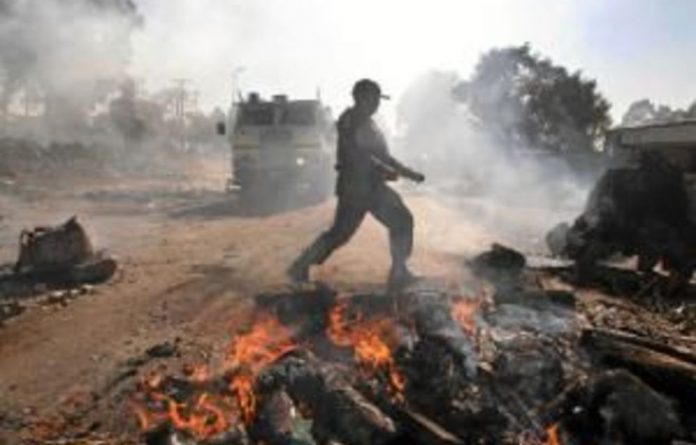 Deep-seated discontent over ward councillors in ANC-controlled areas continues to spill over into violent protests, the latest being in Zandspruit, northwest of Johannesburg on Thursday.

The protests have raised questions about the progress of the ANC’s task team that is meant to be looking into “list irregularities”.

After protests and court action brought against the party by its own members, who claimed that the nomination process was flawed, and before the municipal elections took place, President Jacob Zuma, who is also the ANC president, announced the formation of the team in a bid to unite the party.

Early on Thursday morning, Zand­spruit residents, dissatisfied with service delivery under Ward 100 councillor Maureen Schneeman, again took to the streets to demand that she be removed. Police barricaded one end of a road while at the other, behind a blockade of branches, rocks and burning tyres, a mob of young and old sang struggle songs.

“You see what we have to do to get the government to listen to us?” said Johannes Melley, pointing to the rubbish and rocks on the road.

It has been two months since the elections and the community is angry because no one has been there to address them or their grievances. As they march, they carry posters calling for Schneeman to step down.

“Zuma said we should vote for the ANC and he will build us proper houses and [give us] electricity, but we haven’t heard anything from our councillor,” Mpho Phansi said.

He has been living in Zandspruit since 1994 and has been waiting for an RDP house. He pointed out the one-roomed shack where he lives with his family. In the same yard, he shares a toilet with about six families.

For many, Schneeman was never a preferred candidate — they wanted Steven Nhlapho. They don’t know what happened. “Maureen lives in Sundowner; she doesn’t know life in a shack. We want her out,” a teenager said.

A member of the Zandspruit committee called for a meeting to bring calm to the tense stand-off between the police and residents but a young man from the crowd responded: “We are tired of meetings.”

One of the demonstrators, Zanele Magwaza, said that she had been attending committee meetings all her life but they were often useless because nothing changed.

Phillimon Kokong said: “I have been living here since I was born. My mom has been waiting for an RDP house all her life. Till when are we going to stop living like monkeys?”

There have been similar protests elsewhere.

Ficksburg
Earlier in June in Ficksburg, two municipal officials’ homes were petrol-bombed. One belonged to a recently elected Ward 16 councillor, Vunga Rose Mohala. Before the elections, she was the butt of derisive comments about her competence and ward residents said she was imposed on them.

In the Moses Mabhida region, which includes the Msunduzi Municipality (Pietermartitzburg), sit-in protests over corruption are continuing at the ANC’s regional office. ANC spokesperson Ishmael Mnisi said the party would not disclose information about the task team’s visits. It wanted to gain access to volatile branches or areas without attracting undue attention.

“They are meeting with candidates and structures and will thereafter compile reports to be handed to the national executive committee [NEC]. Decisions on how to proceed will be taken thereafter,” Mnisi said.

“There are no time limits to this process. It is an open-ended one because there was not enough awareness about the nature of problems that could be confronted. They are just meant to work expeditiously and report back to the first NEC meeting.”

Udesh Pillay, the executive director of the Human Sciences Research Council, said post-election protests had generally been muted and the ANC had made every effort to make sure that things were quiet.

“There have been sporadic incidents where communities feel aggrieved about cadre deployment but generally things are more quiet.”

He said the protests were generally caused by three interlinking factors, namely a lack of basic services, a lack of access to a livelihood and the disjunction between councillors and communities.

Trevor Ngwane, a co-founder of the Anti-Privatisation Forum who is doing a master’s degree on service delivery protests in post-apartheid South Africa, said that the post-election period merely represented the calm after the storm.

People were holding Zuma to his promise to deal with irregularities in the nomination process after the election. The pressure to deliver would mount again and the protests would again intensify, Ngwane said.

“In my opinion, when people are dissatisfied with an imposed candidate, it usually has to do with service delivery,” he said. “If there is an opponent, he will opportunistically use service delivery as a launching pad for his campaign against the existing councillor. “It is still early but I imagine the protests will continue,” Ngwane said.

Extortion rackets are part of a corrupt system that includes religious leaders, councillors, police and syndicates