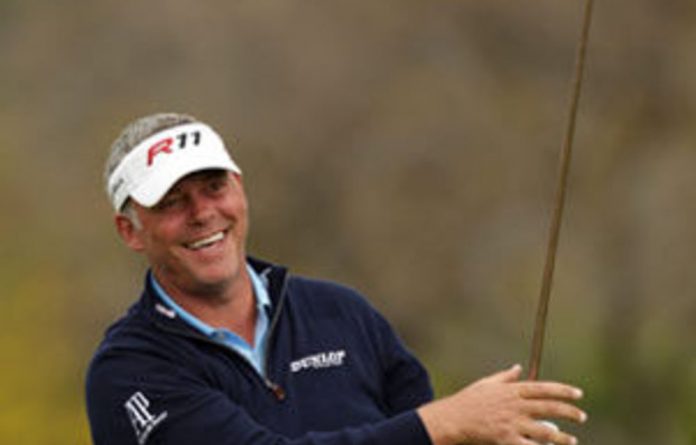 Darren Clarke held his nerve to clinch victory at the British Open on Sunday, becoming the oldest winner of the championship in 44 years as he ended his long wait for a Major.

The popular 42-year-old from Northern Ireland kept his cool in demanding conditions to card a level-par 70, leaving him five under for the tournament and three strokes clear of Americans Phil Mickelson and Dustin Johnson.

“It’s been a dream since I’ve been a kid to win the Open like any kid’s dream is and I’m able to do it, which just feels incredible, incredible right now,” Clarke told reporters.

The win capped a final round of twists and turns at Royal St George’s, where wild fluctuations in the weather were mirrored early on by a fast-moving battle at the top of the leaderboard before Clarke’s rivals fell away.

It also represented a triumph of persistence for the paunchy, cigarette-smoking Clarke, who finally claimed the famous Auld Claret jug at the 20th time of asking, a new record.

‘Keep going, keep going’
Clarke, whose ranking has slipped to 111 in recent years, becomes the oldest winner of the Open since Argentina’s Roberto de Vicenzo won aged 44 in 1967.

Many observers had assumed that Clarke’s days of challenging for Majors were over, with the veteran Ulsterman seemingly destined to forever rue his near-miss at the 1997 Open at Troon, where he tied for second.

But Clarke insisted he never doubted his ability to eventually win a Major.

“You know, bad times in golf are more frequent than the good times,” he said. “There’re times I’ve been completely and utterly fed up with the game.

Paying tribute
Clarke also paid tribute to his late wife Heather — with whom he had two sons — who died in 2006 from breast cancer.

“In terms of what’s going through my heart, there’s obviously somebody who is watching down from up above there, and I know she’d be very proud of me,” he said. “She’d probably be saying, ‘I told you so.’

“But I think she’d be more proud of my two boys and them at home watching more than anything else. It’s been a long journey to get here. But I’ve got here in the end.”

Clarke had started Sunday’s final round with a one-shot advantage over Johnson, who was desperate to atone for suffering two agonising near-misses at last year’s US Open and US PGA Championship.

Yet for long periods of a thrilling final 18 holes it looked as if three-time Major winner Mickelson would pose the most serious threat.

Mickelson — who had started the day five behind Clarke — produced a dazzling putting display over the front nine to wipe out the Ulsterman’s lead and join him at the top of the leaderboard on five under.

The end of the wait
Mickelson reeled in Clarke with three birdies and an eagle to go out in five-under-par courtesy of some red-hot putting, and he might have had another had a birdie putt not lipped out at the eighth.

But Clarke then hit back with a 20-foot eagle putt of his own on the par-five seventh to move to seven-under and move two clear of Mickelson, setting the stage for a nail-biting climax over the back nine.

Mickelson closed to within one of Clarke after holing another long-range putt from 5.4m at the 10th for birdie.

Yet just as it seemed that the momentum was with the 41-year-old from California, Mickelson’s flawless putting deserted him with bogeys on the 11th, 13th, 15th and 16th.

He eventually carded a two-under-par 68, leaving him two under for the tournament, three behind Clarke.

Not McIlroy’s sort of golf
Johnson rolled in an eight-footer on the 12th for birdie to move within two shots of Clarke. But when the 27-year-old from South Carolina crashed his ball out of bounds par-five 14th, it was all over.

Johnson’s double-bogey seven put Clarke four strokes ahead with four holes to play, and from there the result was never in doubt as he came home to roars from the thousands packing the grandstands around the last.

Clarke’s victory was the third by a golfer from Northern Ireland in a Major tournament in just over a year, following Rory McIlroy’s triumph at the US Open in June, an event won by Graeme McDowell 12 months earlier.

It also extended American golf’s record Major losing streak to six. The last US golfer to claim a Major was Mickelson at the 2010 Masters.

Meanwhile pre-tournament favourite McIlroy concluded an unhappy Open with a three-over-par 73 to finish seven over for the tournament.

McIlroy (22) later blamed the variable weather for undermining his challenge.

“I’m not a fan of golf tournaments that the outcome is predicted so much by the weather. It’s not my sort of golf,” McIlroy said. — AFP