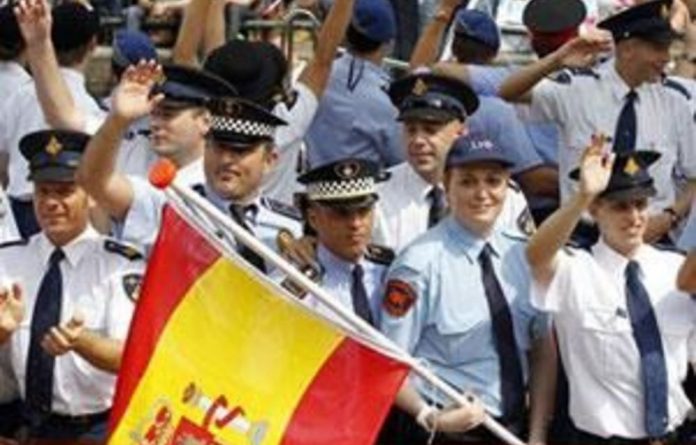 Embracing a policy of “Do Tell,” the Dutch military joined Amsterdam’s annual Gay Pride parade for the first time this year, with uniformed men and women saluting the crowds from a boat chugging through a historic city canal.

A balloon-festooned barge bearing the standards of the service branches and sponsored by the Defence Ministry sailed among about 80 other floats, with music blaring from most of them and dancers dressed in flamboyant costumes — or very little at all.

The parade, watched by hundreds of thousands of spectators lining the Prinsengracht canal, capped a weeklong festival of around 300 parties and events. It included the popular “Drag Queen Olympics” with contests like the stiletto race and the long-distance handbag toss.

US and British activists sailed with Dutch generals and other senior officers — some gay and others showing solidarity — among some 80 military and ministry civilian personnel.

Unlike the US military, gays have openly served in Dutch units since 1974, and for 25 years have had a department within the ministry that minds their interests, the Foundation for Homosexuals in the Armed Forces.

“Huge step forward’
Still, gay servicemen say having their own presentation in the famed floating parade marked “a huge step forward” in a country already noted for sexual equality.

The foundation had been denied permission for several years to join the event, although in the last two years soldiers were allowed to participate in military dress on other boats. “The political leaders thought it was not appropriate to wear a uniform at this kind of parade,” said army Major Peter Kees Hamstra, a foundation spokesperson.

“This shows everyone that the climate is changing,” he said.

Hamstra said 6% to 8% of the Dutch military are gay or lesbian — about the same as in the general population.

“It’s so amazing to be here. This country got it right,” said former US Army Lieutenant Dan Choi, who was discharged last year after violating the “don’t ask, don’t tell” policy. Choi applied to re-enlist after President Barack Obama signed a law last month repealing the ban.

“I intend to go back to the army, in whatever capacity they most need,” he said. But he’d like to be in the army reserve so that he can continue developing his new role as a gay-rights activist.

A West Point graduate and fluent in Arabic, Choi served in Iraq as a translator before acknowledging in a television interview that he is gay.

Britain
Also invited was British naval officer Lieutenant Commander Mandy McBain, a human resources specialist who as a closeted junior officer had to process the papers of soldiers being dismissed because of their sexual orientation. Britain lifted the ban on gays in the military in 2000.

Despite its reputation for sexual liberation, harassment of gays inside and outside the military exists, and may have increased in recent years with more clashes reported.

“There are some macho units” in the Dutch military, said Hamstra. Women also are excluded from some units.

But Choi said, “The Dutch have been leaders, and Americans look up to that,” while the US military remains saddled with discriminatory policies.

Even after the recent legislation, “people will still be treated unfairly in the military. They just cannot get fired for being gay,” he said.

He faulted Obama for deleting nondiscrimination language to win passage of the bill.

“He’s not seeing gay people as legitimate and a recognized minority,” Choi said. Gay soldiers have no family benefits for partners, nor can they use normal channels to complain of harassment, he said. — AP