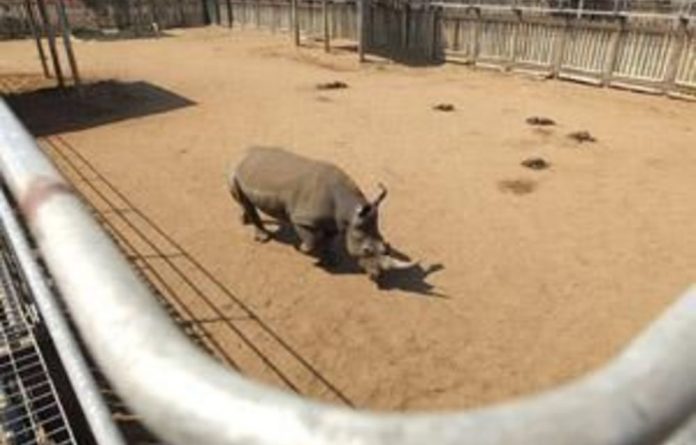 The vultures are startled and take flight as our pickup truck arrives at the giant carcass lying in the lowveld. They have had a week to pick its bones. All that remains of “Izzy”, a six-year-old white rhino, are the curved spears of her ribcage, dismembered feet and a head infested with flies and maggots.

“She was a beautiful cow, a magnificent specimen,” says Barry Bezuidenhout, the estate manager of a sprawling game ranch near the Kruger Park. “When I think of her, I get a lump in the throat.”

We are at the frontline of a conflict that is threatening to turn some of South Africa’s most beautiful nature reserves, a draw for tourists around the world, into lawless battlegrounds — and drive a magnificent animal towards the brink of extinction.

About 265 rhinos have been poached so far this year, according to government figures, an average of more than one per day. This puts 2011 on course to surpass last year’s record death toll of 333. In 2007, it was just 13.

Why? There is no mystery about it. Experts agree the carnage results from a false belief, widespread in the far east, that rhino horn can cure cancer and other life-threatening illnesses. There is now soaring demand from the newly moneyed consumers of China and Vietnam. Poaching gangs here are increasingly sophisticated, using helicopters, silent tranquillisers, body armour, night vision equipment and mercenaries experienced in rhino tracking.

Once a rhino’s horn has been hacked off, they leave the animal to bleed to death. The horn is then smuggled out of the country by an international syndicate. The price of rhino horn is $57 000 per kilogramme, making it more expensive than gold, according to the International Rhino Foundation. The lucrative black market was the subject of intense debate at a meeting of the Convention on International Trade in Endangered Species (Cites) in Geneva last week.

Calls to action have come too late for “Izzy”, who was about to reach breeding age and was expected to produce 10 calves over the next 30 years. As a deterrent to poachers, her horn had been surgically removed under anaesthetic two years ago, but regrew to about 2.5kg — enough to sign her death warrant.

Three poachers came at dead of night, it is believed, shooting her with a .375 rifle and removing the horn with apparently clinical expertise (some rhinos are crudely hacked and disfigured). The animal appears to have walked for about 80m before collapsing and dying. A policeman who visited the scene 36 hours later estimated that the horn would already be in Singapore. The killing was all the more shocking to Bezuidenhout and his staff at the Mauricedale Game Ranch in Malelane because it has seen no poaching incidents since 2007. The estate tries to de-horn all its rhino and employs rangers to patrol its 6 500-hectare grounds and alert the local police if they see anything suspicious.

By day, the grassy top of “warthog hill” offers the kind of vista that has brought generations of travellers to the African bush: a wide sweep of acacia trees, lakes and hills that go on undulating to the far horizon, bathed in a clear golden light. It is a seemingly peaceful haven for aardvarks, bushbucks, crocodiles, elands, giraffes, hippos, impalas, kudus, ostriches, sables, warthogs, waterbucks, zebras and other creatures — none of which prey on rhinos.

Low-level rhino war
But by night, this is the observation point from which rangers such as Khululani Sibuyi work from 6pm to 6am, staring intently for the faintest sign of intruders. “Sometimes it’s boring, but I think it’s good to protect the rhinos,” said the 25-year-old. “It’s dangerous because they’ve got guns and, if you meet them on the ground, they could shoot you. I would like a weapon.”

Armed confrontations have been increasingly common in South Africa’s low-level rhino war. Seventeen poachers have been killed in Kruger Park alone this year by rangers acting in self-defence, South African National Parks (SANParks) says, up from 15 in the whole of last year. This followed an official pledge to “fight fire with fire” and the return of army soldiers to patrol the park’s borders. Some rhino owners have turned to hiring ex-military security guards.

Tom Milliken, director of the wildlife trade monitoring network Traffic’s east and southern Africa programme, said: “Heavily armed people are moving into protected areas to kill rhino. Those charged with their protection face great challenges and gun fights are part of the equation. There is a rhino war going on out there and it continues to get ugly.”

SANParks believes its tough approach has resulted in a significant drop in poaching over the past two months. Police have made 131 arrests so far this year, ranging from poachers to couriers to kingpins. Earlier this month two Vietnamese men were handed prison sentences of 10 and eight years after horns were found in their luggage at Johannesburg’s airport.

But under such pressure, there are fears that gangs will be displaced to private game reserves such as Mauricedale, where a three-metre electric fence and razor wire may not be enough. Mauricedale’s owner, John Hume, says he is the biggest rhino farmer in the world with six estates in South Africa, although he is reluctant to give numbers.

Hume works from an office inside his personal aviary. Exotic birds fly across the room, and have left their mark on his chair. Today, one knocked water over his computer, which he is attempting to remedy with a hair dryer. On the main table, carved from a variety of trees, is a dish full of live worms. Fish trophies adorn the walls and feisty dogs scamper around the room.

The recent rhino death was a bitter blow. “You’re devastated because it makes you realise how vulnerable you and your rhinos are,” Hume said. “Poachers are becoming more sophisticated and that’s worrying. An investigator told us they had identified 27 gangs operating here and have arrested three — and they are probably out on bail.”

Hidden crisis
The 69-year-old believes the true depth of the crisis is hidden. “I think the escalation in poaching is much worse than they officially know, and that’s a problem for rhinos. How are we going to stop this? The market is growing, the Chinese are growing affluent, the demand for horn is escalating at a horrific rate.”

Hume has proposed a bold solution. “I am of the very firm opinion that the only way to save the rhinos from extinction is by legalising the trade in their horns. I am against the futility and stupidity of the current system. It is so illogical, I believe the world will see the light. I only hope they see it in time.”

Hume and other rhino farmers argue that legalising the trade would bring it under control, driving prices down and squeezing the black market. South Africa is studying the idea. Opponents contend there is no control system along the trade chain, supplying horn might stimulate further demand and it would be immoral to feed a false belief in the horn’s medicinal value.

There are an estimated 25 000 rhinos left in Africa. About 20 800 are in South Africa, of which 19 000 are white rhinos and 1 800 black rhinos. This represents a major triumph for conservation given that white rhinos numbered fewer than a hundred when they were hunted to near extinction in the late 19th century. The population is still growing, but experts fear that poachers could undo all the good work.

Dr Joseph Okori, Africa rhino programme manager at the World Wide Fund for Nature (WWF), said: “There is no room for complacency on this issue. We believe the situation is still very alarming and we see it escalating. We do recognise there may have been an apparent slowdown of late but poaching pressure is still up. The demand is still strong across the world and the value of rhino horn is still rising.”

Okori said Cites’ meeting last week saw a strong commitment from African countries and a working group was set up, but warned that China had failed to come up with specific proposals. He added: “We believe that if the current escalation in poaching continues, rhinos will be faced with the threat of extinction down the line. We know this from history.” – guardian.co.uk