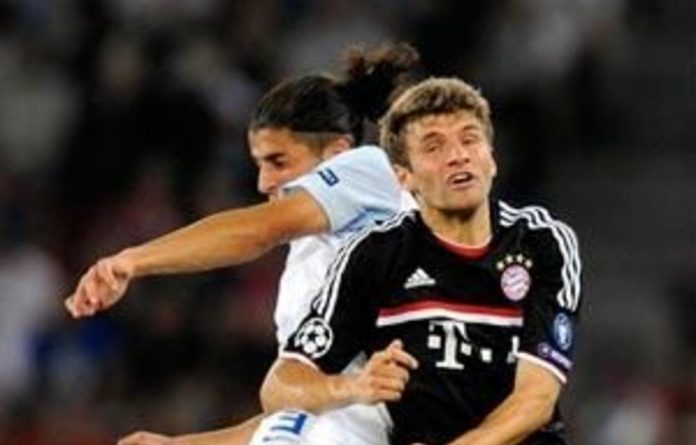 German powerhouse Bayern Munich advanced to the Champions League group stage on Tuesday, winning 1-0 at FC Zurich to complete a 3-0 aggregate victory in the playoff round.

Bayern, a four-time European champion, had a comfortable evening in Switzerland after Mario Gomez finished a simple breakaway move in the seventh minute.

“It was important to get an early goal, it settled the nerves,” Bayern coach Jupp Heynckes said. “You never know how such games are going to go.”

In other playoffs, Giuseppe Rossi’s two second-half goals helped lift Villarreal to a 3-1 aggregate win over Odense, and Dinamo Zagreb and APOEL also advanced to the group stage.

Belgium’s Genk will play in the group stage for the first time in nine years after eliminating Israel’s Maccabi Haifa in a penalty shootout.

Bayern has an extra incentive to succeed this season as its home stadium hosts the final next May.

Bayern’s plans were disrupted when Arjen Robben felt a recurrence of back pains and was left on the
bench.

Zurich is off to a slow start in the Swiss league but threatened in the fifth minute when Amine Chermiti fired a left-foot shot just wide from 20 metres.

Two minutes later, the Swiss defense was exposed by a simple ball to Bayern forward Thomas Mueller on the right touchline. Mueller sent Gomez clear in the middle and the big forward slotted the ball low inside goalkeeper Johnny Leoni’s right hand post.

“The whole buildup to the goal was outstanding,” Heynckes said. “Mueller crossed the ball at the right moment. It looked simple enough but it was brilliantly made.

“It was like how Bayern used to play in the old days, playing the ball with elegance from defense.”

Gomez had a clear chance from a stoppage-time corner but the ball struck his shoulder and flew over.

Zurich missed a chance to put pressure on Bayern in the 55th when Swiss international forward Admir Mehmedi shot wide from inside the penalty box.

Villarreal’s 3-0 win over Odense overturned a 1-0 first-leg deficit, but only after the Spanish side failed to convert early dominance into goals.

Rossi leveled the tie in the 50th minute, forcing home Nilmar’s cross from the right, and the Italy forward connected in the 66th on Cani’s cross with a left-foot volley.

“A difficult game but we played with great intensity and got those quick goals inside 15 minutes,” Rossi said. “We kept to our plan of possession and stayed patient.”

Both teams were reduced to 10 men. Odense’s Bashkim Kadrii collected a second yellow card, and Villarreal’s Borja Valero got a straight red for butting Andrea Johansson in the chest.

Substitute Carlos Marchena’s 82nd-minute shot then found the net due to a mistake by the otherwise excellent Odense goalkeeper Stefan Wessels.

APOEL of Cyprus needed an 87th-minute goal from Brazilian forward Ailton, his second, to secure a 3-1 win on the night — 3-2 on aggregate — against Poland’s Wisla Krakow.

APOEL led in the 29th on an own goal by Krakow goalkeeper Sergei Pareiko, and took control of the tie on Ailton’s 54th-minute goal. Krakow was poised to advance on the away goals rule when Cezary Wilk scored in the 71st, until Ailton’s decisive strike.

Croatian champion Zagreb advanced 4-3 on aggregate despite a bold comeback by Sweden’s Malmo, who were 2-0 winners on Tuesday.

Zagreb’s Sime Vrjalko was sent off early in the second half before Malmo scored through Wilton Figueiredo in the 69th and Pontus Jansson in the 86th.

Genk and Haifa traded 2-1 home wins for a 3-3 aggregate score after extra time, before the Belgian hosts won the shootout 4-1.

Haifa hung on for the shootout after defender Itzhak Cohen was shown a second yellow card in the 109th minute by World Cup final referee Howard Webb.

In Wednesday’s playoffs, Arsenal takes a 1-0 lead to Udinese, Lyon has a 3-1 advantage in Russia against Rubin Kazan and Czech champion Viktoria Plzen defends a 3-1 lead at home to Copenhagen.

Benfica hosts FC Twente after a 2-2 draw in the Netherlands and Sturm Graz resumes in Austria at 1-1 against BATE Borisov of Belarus. — Sapa-AP