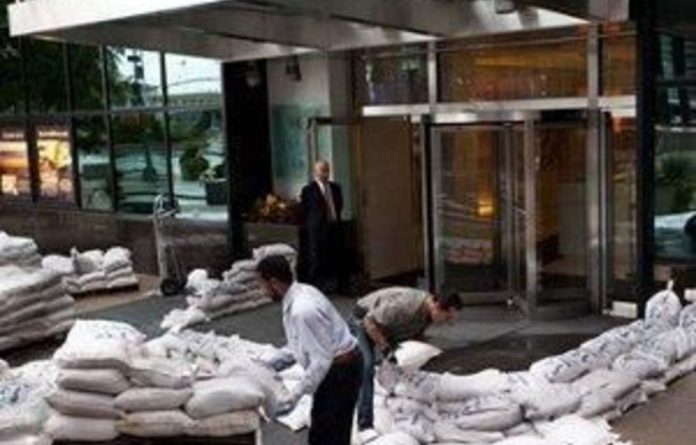 Hurricane Irene battered New York with ferocious winds and driving rain early on Sunday, shutting down the US financial capital and most populous city, halting mass transit and causing massive power blackouts as it churned slowly northward along the East Coast.

New York City’s normally bustling streets were eerily quiet after authorities ordered tens of thousands of residents to evacuate low-lying areas and shut down its subways, airports and buses.

Commuters were left to try to flag down yellow taxis and livery cabs that patrolled largely deserted streets.

From the Carolinas to Maine, tens of millions of people were in the path of Irene, which howled ashore in North Carolina at daybreak on Saturday, dumping torrential rain, felling trees and knocking out power.

“The edge of the hurricane has finally got upon us,” New York Mayor Michael Bloomberg told the more than eight million people who live in New York as he warned that tropical storm-force winds would hit the city.

Times Square, often called the crossroads of the world, was sparsely populated, mostly with visitors, as Irene rolled into the city with full force.

“We just came to see how few people are in Times Square and then we’re going back,” said Cheryl Gibson, who was vacationing in the city and had planned to go to the other side of the Hudson River on Sunday. “We can’t get to New Jersey and I’m not sure it’s any better there,” she said.

Bloomberg warned New Yorkers Irene was a life-threatening storm and urged them to stay indoors to avoid flying debris, flooding or the risk of being electrocuted by downed power lines. “It is dangerous out there,” he said, but added later:

“New York is the greatest city in the world and we will weather this storm.”

About 370 000 city residents were ordered to leave their homes in low-lying areas, many of them in parts of the boroughs of Brooklyn, Queens and Manhattan.

But many were unwilling to evacuate. Nicholas Vigliotti (24) an auditor who lives in a high-rise building along the Brooklyn waterfront, said he saw no point. “Even if there was a flood, I live on the fifth floor,” he said.

Storm surge fears
Flood waters forced officials in Hoboken, just across the Hudson River from Manhattan, to evacuate a storm shelter, the mayor of Hoboken, Dawn Zimmer, said on Twitter.

The Miami-based US National Hurricane Centre forecast a storm surge of up to 2.5m for Long Island and metropolitan New York. That could top the flood walls protecting the south end of Manhattan if it comes at high tide about noon GMT.

As it moved into New York, the hurricane centre said it was expected to remain a hurricane and weaken only after making its second landfall in New England.

This year has been one of the most extreme for weather in US history, with $35-billion in losses so far from floods, tornadoes and heat waves.

Seven deaths reported
President Barack Obama, who cut his vacation short on the Massachusetts island of Martha’s Vineyard to return to the White House, was keeping a close eye on preparations for the hurricane.

After moving across North Carolina with less punch than expected but still threatening, the hurricane re-emerged over inshore waters on its route northward, hugging the coast.

At least seven deaths were reported in North Carolina, Virginia and Florida. Several million people were under evacuation orders on the US East Coast.

When Irene hit the North Carolina coast at daybreak, winds howled through the power lines, rain fell in sheets and streets were flooded or littered with signs and tree branches.

Hundreds of thousands of people in Irene’s path evacuated their homes, many taking refuge in official shelters.

“Things can be replaced, but life can’t be,” said Robert Hudson, a 64-year-old military retiree, who sought refuge at a shelter in Milford High School in Delaware.

North Carolina Governor Bev Perdue said there may be “a major hit” to tobacco crops, poultry and livestock in her state.

Torrential rain hit downtown Washington but expected high winds had still not reached the city after midnight and restaurants remained open, some of them almost full.

Irene was the first hurricane to hit the US mainland since Ike pounded Texas in 2008. Emergency workers were mindful of Hurricane Katrina, which swamped New Orleans, killed up to 1 800 people and caused $80-billion in damage in 2005. – Reuters