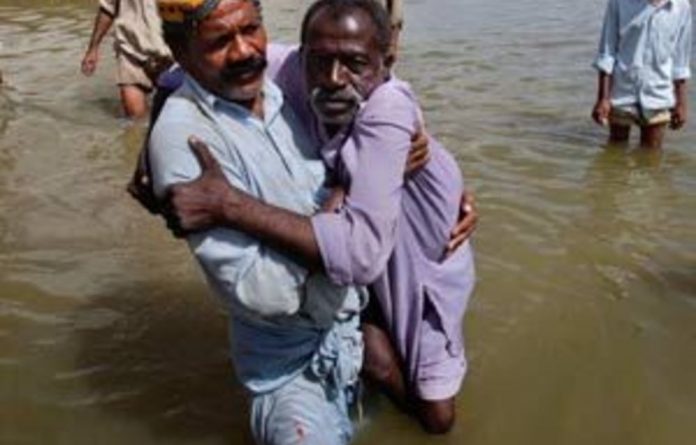 One year after record floods left 21-million Pakistanis homeless, thousands living on the country’s southern fertile plains have seen their homes washed away for a second time — despite the spending of millions of dollars in aid to avert a fresh crisis.

Anwer Mirani is one of 20 000 people living in Sindh province’s Jamshoro district who have been made homeless again after heavy downpours and rainwater from the surrounding mountains swept their homes away.

“We had just begun to restore our houses when we had to leave again because of the floods,” said the 38-year-old construction worker, wearing a tatty shalwar kameez, the traditional garb of baggy trousers and long shirt.

He took his wife, parents and three children in a boat loaded with their few household goods and has made his way to the same nearby hills they had escaped to one year ago.

“What can we do except run away? No one can fight nature,” he said.

Rain of terror
The heavy rains that began falling in late August have so far affected at least 5.3-million people, made 200 000 homeless for a second time and deluged 1.7-million acres of arable land, government officials say.

The devastation has not reached the scale of 2010’s catastrophe that caused $10-billion losses, but with the aid-dependent government seeking fresh funds, questions have been raised over whether the new disaster could have been prevented.

The government was last year pilloried by flood victims who accused civilian authorities of a delayed and inadequate response to the disaster, which was met with nearly one billion dollars in foreign donations.

In July, relief agency Oxfam said that Pakistan had failed to invest in prevention measures since last year and warned that river banks had not been rebuilt, estimating that 37 000 people in Sindh were still living in camps.

Local officials say the level of devastation is worse than last year in parts of southern Sindh province, the country’s main breadbasket, with poor drainage and weak infrastructure exacerbating the problem.

Last year’s floods hit 13 out of 24 districts of Sindh — this year almost every district is affected.

But while last year’s disaster was caused by the bulging River Indus, causing mass devastation where waters breached the broken banks, the flooding this year is a result of direct rainfall, affecting different areas.

“This year the river is quiet and the catastrophe came from the skies,” said Idrees Rajput, a consultant with the provincial government’s irrigation ministry, who added there was no budget to invest properly in infrastructure.

“The rains are unprecedented this year, which has exposed how weak our infrastructure is. It is not a matter of preparedness to face floods. Our system was even inadequate for lesser rains.”

Relief workers said the government’s rebuilding efforts along the river had focused more on strengthening the main protection walls and embankments and ignored some of the smaller weak spots.

“The monsoon exploited on all those weaker points and caused huge losses,” said Akbar Khoso of Thar Deep, a non-governmental organisation in the area.

The UN’s World Food Programme agency said it is currently working to provide emergency supplies to half a million people and would scale up operations with the aim of reaching over two million in October.

The United States says it is sending food aid for nearly 350 000 Pakistanis and medical assistance for about 500 000, while China, Pakistan’s most trusted foreign ally, said it had pledged $4.7-million for urgent humanitarian help.

Meanwhile, residents of the southern region are resigned to facing another year of upheaval.

Ashraf Jatoi, 45, a peasant from Nausheroferoze district, has travelled with his family to the nearby town of Moro and has no idea how long he will have to wait before returning to his broken home.

“We spent months last year because of floods, and it seems we have to do it again. What can we do? It is the will of Allah,” he said.

Killing of newborn babies on the rise in Pakistan

UN in aid push for Pakistan as US steps up relief