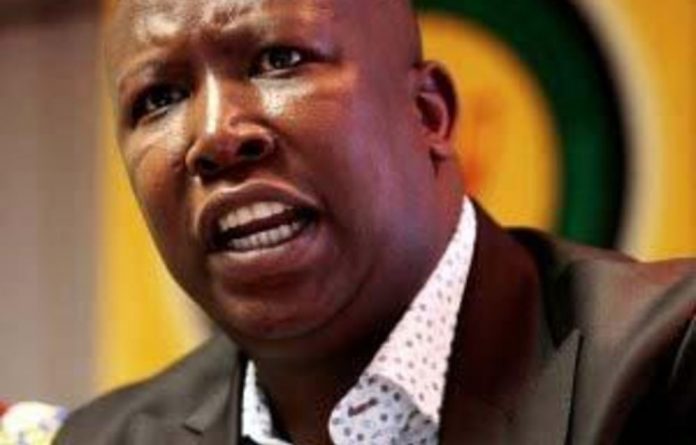 Three years ago the final school results of the leader of the African National Congress’s Youth League, Julius Malema, were leaked on the internet and subsequently published by the press. They showed that the firebrand had achieved a G in woodwork, and had performed even more dismally in other subjects.

South Africa was united in its laughter. Cartoons and email jokes hopped between offices. Malema, whose English was not what one could call polished, did not help matters by launching a personal attack on the accent of the education minister — and then being forced into a grovelling apology.

In 2009, he launched a campaign to nationalise mines and expropriate white land without compensation, which was consistently contradicted by leaders of his own party and ridiculed in the press.

Malema was not a force to be reckoned with, the consensus was.

That was then. Yesterday, the “buffoon” of South African politics was named as one of Africa’s 10 most powerful young men by international business magazine Forbes.

“The ANCYL wields enormous power in South African politics, and played a pivotal role in the election of incumbent president, Jacob Zuma, during the 2009 presidential elections,” Forbes said.

It is not far off the mark. Malema has come from nowhere and, in just three years since his controversial election in 2008 as ANC Youth League president, has inserted himself at the very centre of debate about South Africa’s future political direction. On the two touchiest issues in South Africa — macroeconomic policy and race relations — Malema is the central player .

This week, after a high court judge ruled that Malema’s favourite struggle song, Dubula I’bhunu (Shoot the Boer) constituted hate speech and was therefore banned, Malema slammed the judiciary, saying it was being used as a “back door” to usher apartheid back in.

“We’re being subjected again to white minority approval of what we must do and we cannot allow that,” he said. “The oppressor has gained too much confidence and we allowed that space. We have reached a time [when] we must place the oppressor where he belongs.”

Malema does not make just white people — and many middle-class black people — jittery. His call for the nationalisation of mines, expropriation of white land without compensation and an overhaul of the economy to benefit the poor have already noticeably chilled investor sentiment towards South Africa. According to a UN report in 2011, South Africa’s share of foreign direct investment fell 70% last year from 2009.

Malema has become what his growing number of supporters call an “unstoppable tsunami”, a phrase once used to describe Zuma as he made his bid to unseat Thabo Mbeki from office. Many say he has become too popular and too powerful to rein in.

Malema is in a titanic struggle with Zuma, who once declared him a future president, and has been brought before the ANC’s disciplinary committee on charges of bringing the party into disrepute. This is after he said the league would send a team to neighbouring Botswana to consolidate opposition parties and to help bring about regime change, as the government there was “in full cooperation with imperialists”.

These are not Malema’s only troubles. He has faced intense media scrutiny and exposure of his lavish lifestyle. He has more than eight known properties, recently demolished a R3.6-million house and is building a new one valued at R16-million with a bunker, and is mocked for his flashy cars and collection of watches. The “economic freedom fighter”, as he calls himself, is being investigated by the revenue services, the office of the public protector and the elite crime-fighting unit, the Hawks.

Yet Malema’s influence continues to grow and his travails are watched with interest. It is an extraordinary journey for a young man (he is only 30), who was born and raised in poverty in one of South Africa’s poorest provinces, Limpopo. In the foreword to a new book (An Inconvenient Youth: Julius Malema and the “new” ANC) by Irish journalist Fiona Forde, philosopher and political scientist Achille Mbembe writes that one of the main tensions in South African politics today is the realisation that there is something unresolved in the constitutional democratic settlement that suspended the “revolution” in 1994 but did not erase apartheid from the social, economic and mental landscape.

‘Extraordinary rupture’
“It is the stalemate Malema would like to puncture,” Mbembe writes. “It is in the failure of the South African government and society to build creatively on the extraordinary rupture, or promise, of 1994 and radically confront black poverty that Malema sees his political opportunity.

“His ascendancy highlights the current dangers South Africa faces: a gradual closing of life chances for many; an increasing polarisation of the racial structure; a structure of indecision at the heart of politics itself; and a re-balkanisation of culture and society.”

Mbembe’s assessment comes within the backdrop of an increasingly unequal South Africa. University of Cape Town economics professor Haroon Bhorat said in 2009 that South Africa overtook Brazil as the country with the widest gap between rich and poor.

This explains Malema’s massive popularity in shack settlements, where he is feted as a saviour of the poor. Last weekend, he drove from his home in the plush Johannesburg suburb of Sandton, known as the shopping mecca of the continent, to Alexandra, one of the poorest places in South Africa. He was his usual radical self. “Anybody who says we have contravened an ANC policy by saying they [whites] have stolen the land, they must tell us which policy we contravened,” he told the crowd.

Malema has crafted his campaign for “economic freedom in our lifetime” as a struggle similar to that waged by Nelson Mandela and his comrades to radicalise an ANC that would not take up the armed struggle in the 1950s even as apartheid became increasingly entrenched and bitter. In the squatter camp on Saturday, he cast himself as a martyr: “If we have come to the end, let it be so. If you are angry with Julius, don’t destroy the ANC Youth League. It doesn’t belong to Julius … but because you do not come from the youth league, because you know nothing about the politics of the ANC, you want to destroy the work of Nelson Mandela.”

He then cut a cake delivered in a Porsche by a celebrity known for eating sushi off naked women. The crowd loved it.

This is part of the contradiction of Malema. Even as he is vilified by the press for his association with crass celebrities and the flaunting of his incredible wealth with inexplicable origins, ordinary people say “what’s wrong with Juju making money”. In him, many see themselves. In him, many see a man who takes on an untransformed South Africa and champions their cause.

“His popularity is not unlike that of Robert Mugabe,” says Forde, who had unfettered access to him until she started asking difficult questions. “Democrat or demagogue? I think he is a demagogue.”

For the next few days, though, all eyes will be on whether Malema is suspended or expelled from the ANC. Whatever decision is made about him, it will determine whether he participates in the ANC’s Mangaung conference in December 2012. The ANC Youth League has already made it clear that it demands “generational change”, meaning that the older generation of ANC leaders must make way for a younger breed.

Zuma is one of those the league wants to see replaced. If he loses this week’s battle to Malema, then he has no chance of a second term and the ANC faces a radically changed future, largely scripted by a young man who came from nowhere to refashion the ANC of Mandela.

Malema’s chances cannot be underestimated. Zuma has already failed to rein him in once, when Malema shrugged off charges in 2010. Like Zuma when he was facing corruption charges, many are now saying Malema is the ANC’s new “man with nine lives”.

His fate is not his alone. It is South Africa’s too. – guardian.co.uk