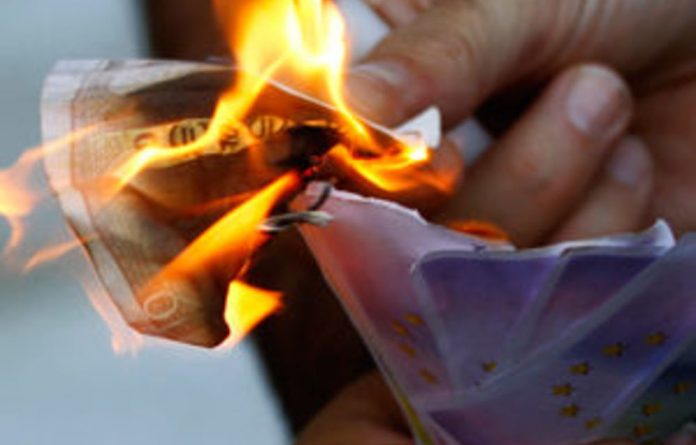 Standard & Poor’s cut its unsolicited ratings on Italy by one notch on Tuesday, a surprise move that sharply increases strains on the debt-stressed eurozone and piles pressure on policymakers to take more decisive action to resolve the crisis.

Analysts said the downgrade was ominous for the global economy and needed an urgent response. It overshadowed reports that Greece, scrambling to avoid running out of money within weeks, was near a deal to continue receiving bailout funds and that Brazil was willing to pump in $10-billion through the IMF to aid Europe.

“Italy is a much bigger deal than Greece,” said Kathy Lien, director of currency research at GFT in New York.

“It’s a much bigger deal because a lot more countries are exposed to Italian debt than they are Greek debt. The greatest concern was never really about Greece but the contagion over to Italy and to Spain … The uncertainty has really escalated and CDS prices are really going to skyrocket.”

CDS, or credit default swaps, insure against the possibility of a default on debt.

Europe has come under increasing global pressure to resolve a crisis that has seen numerous ratings downgrades and financial rescues for Greece, Portugal and Ireland.

Analysts said the crisis will have to be addressed by policymakers starting with the US Fed meeting on Tuesday and Wednesday and the G20 and IMF/World Bank meetings this week.

“I think it’s going to necessitate some sort of action by the G20 this weekend,” said Lien.

“For the Federal Reserve, I think it’s going to certainly increase the chance of some greater stimulus from the central bank. If they were thinking about increasing stimulus prior to the downgrade I think they are going to probably give it much more serious thought after the downgrade.”

The euro fell 0.5% against the dollar in Asian trade after the S&P announcement but analysts said more losses could be in store.

“I expect this decision will push up yields for Italian bonds and pressure yields on other peripheral bond yields higher in the days ahead,” said Carl Weinberg, chief economist for high-frequency economics at Valhalla, New York. “This downgrade will push the euro lower.”

The head of the European Central Bank, Jean-Claude Trichet, urged in a newspaper interview that European banks strengthen their balance sheets to improve their resistance to the crisis.

The Financial Times reported that German industrial conglomerate Siemens had withdrawn more than half a billion euros in cash deposits from a large French bank two weeks ago, partly out of concern about the bank’s financial health and partly to benefit from higher interest rates paid by the ECB.

The Bank of China has stopped foreign exchange forwards and swaps trading with several European banks, citing the debt crisis, three sources with direct knowledge of the matter said, reflecting a broad unease about counterparty risk.

Greece however is near a deal to continue receiving bailout funds, a Greek finance ministry official said after a conference call with lenders, though “some work still needs to be done”.

Greek Finance Minister Evangelos Venizelos held what Greece termed “productive and substantive” talks by telephone with senior officials of the European Union and IMF on Monday after promising as much austerity as necessary to win a vital next installment of aid.

The talks will resume on Tuesday evening after experts meet through the day. Earlier, the IMF’s representative in Greece spelled out steps Athens must take to secure the €8-billion loan it needs to pay salaries and pensions next month.

“The ball is in the Greek court. Implementation is of the essence,” Bob Traa, the IMF representative, told an economic conference. For details, see

Dragged to centre
Italy, the eurozone’s third-largest economy, has been dragged to the centre of the debt crisis over the past three months as concern grew about its ability to handle debt equal to 120% of GDP.

S&P’s downgrade was a surprise because the market had thought ratings rival Moody’s was more likely to downgrade Italy first. Moody’s said last week it would take another month to decide on its action.

S&P cut its unsolicited ratings on Italy to A/A-1 from A+/A-1+ and kept its outlook negative.

The agency, which put Italy on review for downgrade in May, said the growth outlook was worsening and there was little sign that Prime Minister Silvio Berlusconi’s fractious centre-right government could respond effectively.

Under mounting pressure to cut its debt, the government pushed a €59.8-billion austerity plan through Parliament last week, pledging a balanced budget by 2013.

But there has been little confidence that the much-revised package of tax hikes and spending cuts, agreed only after repeated chopping and changing, will do anything to address Italy’s underlying problem of persistently stagnant growth.

“We believe the reduced pace of Italy’s economic activity to date will make the government’s revised fiscal targets difficult to achieve,” S&P said in a statement.

China meanwhile said it was disappointed the European Union had not granted it market economy status that could protect it from trade sanctions, but pulled back from linking the issue to support for debt-stricken Europe.

The remarks by a commerce ministry spokesperson appeared to back-pedal from comments a week ago by Prime Minister Wen Jiabao, who said Beijing might invest a bigger slice of China’s $3.2-trillion in foreign exchange reserves in Europe even as he requested that European countries approve China’s designation as a market economy.

“Recognising China’s market economy status and supporting Europe to help tackle its debt crisis are two different things,” said spokesperson Shen Danyang. “China usually does not set preconditions when offering a hand to others. We only want respect for our sincere help.”

Brazil could make up to $10-billion of its own money available to help Europe through various channels, including the IMF, or by making bond purchases and has urged other large emerging market countries to provide similar support, an official told Reuters.

It has previously said it was in talks with the four other big emerging economies or so-called Brics — Russia, India, China and South Africa — to make coordinated purchases of bonds of eurozone countries.

Brazil’s contribution by itself would almost certainly be too small to make a major difference to Europe’s debt.

Yet a coordinated effort that includes China and Russia, in particular, could have greater impact at a time when investors are looking to large, growing emerging markets with high foreign reserves as a potential source of help.

Analysts said despite the raft of bad news emanating about Europe, some positive signs could bring a quick turnaround in sentiment.

“For instance, if Greece can get their house in order to get their funds for the short term, that is going to have a greater impact than S&P downgrading Italy.”

“Or, if the EFSF [European Financial Stability Facility] expands its balance sheet like the Fed has done, that has a bigger impact than S&P cutting Italy.” – Reuters