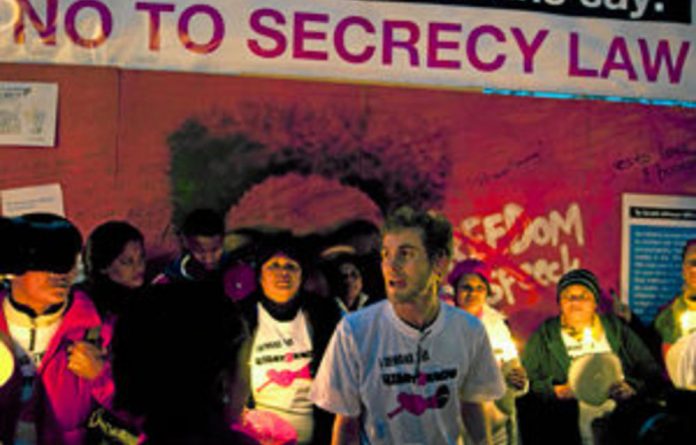 The ANC’s national executive committee meeting was given an unscheduled presentation on the controversial Protection of State Information Bill by Dennis Dlomo, the special adviser to State Security Minister Siyabonga Cwele, shortly before the Bill was unexpectedly withdrawn in Parliament earlier this week.

The Bill was not on the agenda for discussion at the meeting last weekend, but the Mail & Guardian has reliably learned from an NEC member that representatives from the ANC political committee ushered Dlomo in for a brief presentation.

The Right2Know campaign marched with hundreds of supporters to Parliament to protest against the implementation of the controversial Secrecy Bill, ahead of a planned debate this week. ANC secretary general Gwede Mantashe has subsequently signaled it may be shelved.

After the presentation Trevor Manuel, the minister in the presidency for the National Planning Commission, and other members of the political committee suggested the Bill should have been brought to the NEC before it was debated in the National Assembly. Two other NEC members verified that Dlomo was at the meeting and had presented the Bill.

Some NEC members wondered who Dlomo was and why the Bill was not placed on the agenda. They questioned why the minister had not made the presentation himself, said an NEC member.

This follows a week in which Cwele reportedly clashed with his three top intelligence chiefs, Gibson Njenje, Jeff Maqetuka and Moe Shaik, amid claims that he had requested they use state security to spy on ANC leaders perceived to be hostile to President Jacob Zuma. The Bill has been driven by Cwele and has provoked unprecedented public opposition.

The NEC member said it was unusual that a “securocrat” had been brought in to address the body. At the time of going to press, Cwele had not responded to questions from the M&G. Manuel refused to comment.

“I never discuss what happens in meetings,” he said, emphasising that the meeting was closed for a reason. Nevertheless, one of the NEC members confirmed that there were concerns that the Bill had been poorly handled politically and there had been insufficient consultation with the NEC. There was no division on the necessity for the Bill, but a decision had been taken to halt its progress to ensure that it was dealt with properly, said another.

Further discussions
In spite of clear indications that the decision to temporarily suspend of the Bill may have been prompted by the NEC, ANC parliamentarians were at pains to emphasise it came from the parliamentary caucus.

ANC chief whip Mathole Motshekga told journalists at a briefing on the decision by the ANC not to table the draft Bill in the National Assembly that the NEC had deployed “us in Parliament to implement the parliamentary programme”. “Our caucus does not go to the NEC to ask what decision to take,” he said. The Bill was being withdrawn from the parliamentary programme for further discussions to be held internally and with constituencies, other political parties and broader society, Motshekga said.

There were still interested parties who needed further hearings, as well as others who had made late submissions, he said. But he could not indicate who these interested parties were. The life of the ad hoc committee tasked with processing the Bill has ended, however, and it is not clear how any additional submissions will be heard.

Motshekga told the M&G there was no basis for re-establishing the committee, as no new substantive submissions worth considering had come in. If, however, new submissions “that have merit” were received, Parliament could look at re-establishing the committee to hear them, he said. Early next week the ANC will give a clearer indication of the form and shape this process will take.

Alliance partner the Congress of South African Trade Unions has been a vocal critic of the Bill. Cosatu’s parliamentary office coordinator, Prakashnee Govender, said it was not clear what motivated the halt to the Bill’s passage through Parliament, although Cosatu had indicated publicly that it would continue to engage the ANC on the Bill.

Discussions had been taking place, she said, but these interactions had not necessarily motivated the change in position. While the trade union federation welcomed the move, she said it hoped the future process would be meaningful. Cosatu was open to providing renewed or further input on the Bill.

Media indaba sparks confusion
Parliament’s indaba about the transformation of the print media was marred by confusion at the outset on Thursday, drawing objection from participants about its scope and the lack of proper public participation.

Eric Kholwane, the ANC chair of the portfolio committee on communications, was at pains to clarify that the talks would focus on issues relating to transformation only, rather than on press accountability. But participants pointed out that the invitation included a briefing document clearly referencing claims of ailing accountability in the media and Parliament’s pending inquiry into media accountability mechanisms.

Jane Duncan, representing civil society coalition Right2Know’s campaign, registered an objection to the organisation of the indaba. “We do not think the indaba has been organised in such as way that it fulfils the constitutional obligation of encouraging public participation,” said Duncan. The invitation period had been too short to facilitate participation, she said, and the coalition was concerned about the indaba’s inclusivity.

“We’d like to note our concerns that the debate surrounding diversity and transformation in the media has been contextualised under the banner of media accountability mechanisms,” said Julie Reid, who co-presented for the Right2Know campaign.

The Association of Independent Publishers (AIP), in its written submission to the committee, queried the rationale for the indaba. The AIP did not see the relevance of journalistic and media-freedom issues to economic issues, it said. They should not be conflated.

The organisation, which represents grass-roots print-media enterprises, said the debate should focus on business sustainability issues and the black economic empowerment challenges facing the print media.

Market domination
Questions of media freedom aside, Duncan pointed to serious challenges in the lack of black ownership of large print media houses, as well as the concentration of the market, dominated by a few large groups such as Media24.

There was controversy in the run up to the indaba, as key stakeholders appear not to have been invited. Key among these was the South African National Editors’ Forum (Sanef). But Sanef chair Mondli Makhanya confirmed that the body would participate in the round-table discussion at the indaba on Friday. Kholwane said Parliament would deal with the matter of media accountability mechanisms “in due course” following further internal discussions.

No public interest defence
The Protection of State Information Bill as it stands now provides any citizen who handles a classified record can be sentenced to up to 25 years in jail. Without a public interest defence, the Bill would allow wrongdoing and threats to public safety to be covered under a cloak of secrecy.

Critics of the Bill say this constitutes an unjustifiable limitation on the right of access to information guaranteed in the Bill of Rights. Should a whistle-blowing official want to leak a classified record to a journalist, campaigner or member of Parliament, the official risks being prosecuted for unlawful disclosure. Those who receive the document risk being prosecuted for unlawful receipt and failure to report possession.