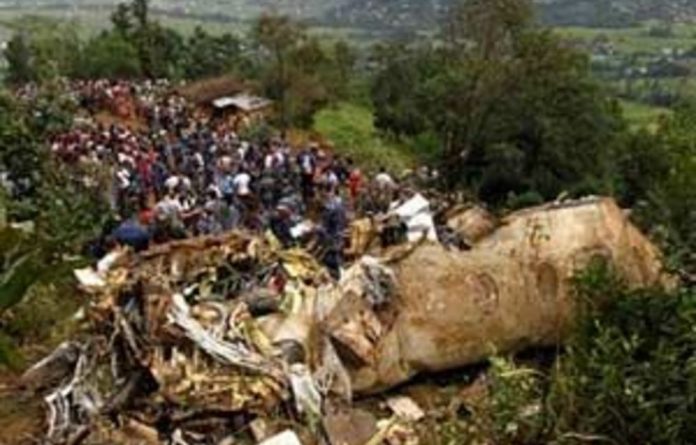 An aircraft taking tourists on a morning sightseeing trip around Mount Everest crashed into a hillside near the Nepalese capital Kathmandu on Sunday, killing all 19 people on board.

The Buddha Air Beechcraft plane, carrying 10 Indians, two Americans, one Japanese citizen and three local passengers, came down in heavy rain and fog at Godavari, around 10km from Kathmandu.

The three Nepalese crew also died in the accident as the plane smashed into wooded slopes — leaving the fuselage broken into several pieces.

“All 19 people have died. The Buddha Air-103 was returning from a mountain flight when it crashed into Kotdada Hill,” Bimlesh Lal Karna, head of the rescue department at Tribhuwan International Airport, told Agence France-Presse.

Police spokesperson Binod Singh said one person had initially survived the crash but had died in hospital.

“The rescue efforts have been hampered by heavy rain,” he added, confirming the nationalities of the passengers.

Scattered bodies
Airport authorities on the ground lost contact with the plane at 7:30am and it crashed minutes later.

“When we reached the crash site, we found the dead bodies scattered within 25 metres of the site which is surrounded by trees,” Dip Shamsher Rana, a police officer who took part in the rescue, told AFP.

“The nearest road is 50 metres away. There were mangled remains of the aircraft which was broken into several pieces.”

Witnesses told local television stations how the plane burst into flames on impact.

“The plane was flying very low. We were surprised. It crashed into the hill and there was a huge explosion,” one man told the Avenues Television news channel.

Buddha Air, a private airline based in Kathmandu, was not immediately available for comment but was due to release a statement later.

The company offers a $140 “Everest Experience” package, taking tourists from Kathmandu and flying them around the world’s tallest mountain and surrounding peaks.

The Buddha Air website describes the Beechcraft as the “safest plane operating in the domestic sector”.

It adds that early morning flights are scheduled to take advantage of better weather conditions before winds blow up snow plumes that can obscure the Himalayan panorama.

Aviation accidents are relatively common in Nepal, particularly during the summer monsoon, when visibility is often poor.

In December last year, a Twin Otter plane carrying three crew and 19 passengers smashed into a mountainside shortly after taking off from a small airstrip 140km east of Kathmandu.

The passengers were mostly Bhutanese citizens on a religious tour of Nepal and had chartered the Tara Air plane to take them to a Buddhist holy site in the area.

In November last year a helicopter crashed near Mount Everest during a mission to rescue two stranded climbers, killing the pilot and an engineer.

Three months earlier, a plane headed for the Everest region crashed in bad weather killing all 14 people on board, including four Americans, a Japanese and a British national.

Nepal has only a limited road network and many communities in the mountains and hills are accessible only on foot or by air. — AFP