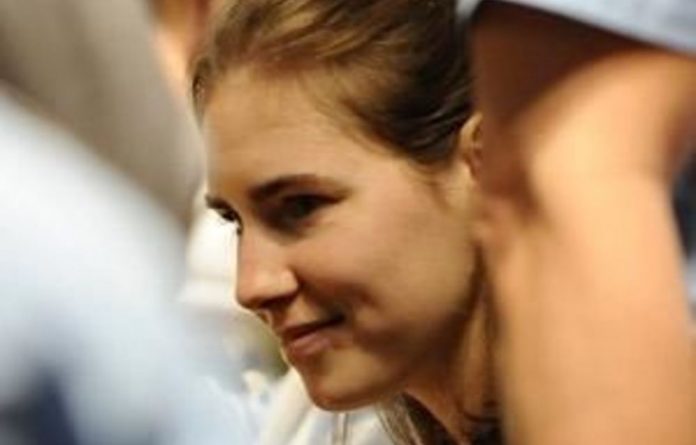 Amanda Knox has returned home to Seattle, one day after an Italian court cleared the 24-year-old college student of murder and freed her from prison.

A plane carrying Knox, who grew up in the close-knit West Seattle neighborhood where both of her divorced parents still live, landed at Seattle-Tacoma International Airport shortly after 5pm local time.

Knox wiped away tears as she spoke to a throng of reporters at the airport minutes after she stepped off the plane.

“They are reminding me to speak in English because I’m having trouble with that,” Knox, 24, said in brief remarks. “I’m really overwhelmed right now. I was looking down from the airplane and it seemed like everything wasn’t real.”

A former University of Washington student, Knox thanked “everyone who has believed in me, who has defended me” during her ordeal. “I just want my family. That’s the most important thing to me right now, and I just want to go be with them.”

‘Just normal things’
Anne Bremner, a Seattle defence attorney and spokesperson for Friends of Amanda Knox, said that according to her family Knox was looking forward to having a backyard barbecue, being outside in the grass, playing soccer and seeing old friends.

“Just normal things that you would want to do after being in prison for four years for a crime you didn’t do,” she said.

Knox sobbed on hearing that the court had overturned her 2009 conviction for murdering her housemate, 21-year-old Meredith Kercher, in what prosecutors have said was a drug-fueled sexual assault.

Also cleared was her former boyfriend, Rafaele Sollecito, leaving Ivorian drifter Rudy Guede as the only person convicted in a killing which investigators believe was carried out by more than one person.

Kercher’s half-naked body was found, with more than 40 wounds and a deep gash in her throat, in the apartment she shared with Knox in Perugia, where both were studying.

The trial gripped attention on both sides of the Atlantic. There was an outpouring of sympathy and outrage from many in the United States who regarded Knox as an innocent girl caught in the clutches of a medieval justice system.

Prosecutor to appeal
The Italian prosecutor has announced he intends to appeal Knox’s acquittal to Italy’s highest appellate court, Corte Suprema di Cassazione, which can only review technical errors that occurred in the lower courts.

In Italy, an acquittal becomes final only after all judicial avenues have been pursued. In this case, that would mean the Corte Suprema would have to either affirm or decline to hear the appeal.

If the Corte Suprema overturns the acquittal, it could reinstate the original murder charges against Knox, which would allow prosecutors to seek her extradition from the United States under a treaty between the two countries.

Considering the controversy surrounding the case, legal experts say there likely would be a heated diplomatic dispute before the US would agree to extradite Knox.

Kercher’s family has refrained from criticising Knox or Sollecito but has said repeatedly that Meredith has been forgotten in the media frenzy.

Kercher’s sister Stephanie said after the trial “the biggest disappointment [is] not knowing still and knowing that there is someone or people out there who have done this.”