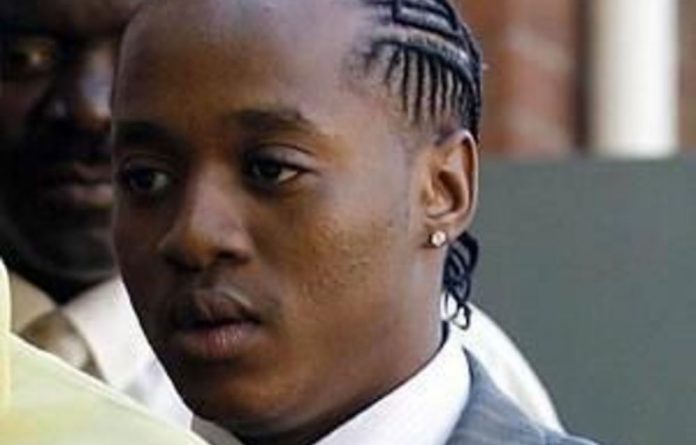 The cars of Molemo “Jub Jub” Maarohanye and Themba Tshabalala did not collide with each other, the Protea Magistrate’s Court heard on Monday.

Accident reconstruction expert Renier Balt told the court the two Mini Coopers overturned as a result of over-steering and did not have contact with each other.

“There was no transfer of paint,” Balt said.

Maarohanye and Tshabalala face charges of murder, attempted murder and driving under the influence of drugs and alcohol.

They were allegedly drag-racing when one of their Minis ploughed into a group of schoolchildren in Protea North, Soweto, on March 8 2010.

Four children were killed in the accident and two injured.

Balt said the two cars were in good condition before the accident.

The blue Mini was travelling at 109km/hour and the silver Mini at 112km/hour.

From the marks he was able to determine the speed at which the two cars were travelling.

Defence lawyer Ike Motloung submitted that the police had kept urine samples in a locker for 10 days before they were sent to a laboratory.

He said a cellphone allegedly used to take a video of the cars racing was sent to a corner shop, instead of a police support centre, to open the footage.

Motloung said Segapo first listened to what was being said and if he did not like what he heard, he did not take a statement.

Segapo earlier told the court he had listened to a statement by two boys who were allegedly in the cars that ploughed into the children.

Segapo said this was so he could have a better understanding of what was being said before he wrote it down.

He said he could not obtain a statement from the boys because he suspected they had been coached on what to say.

Motloung put it to him that the manner in which he obtained statements was incorrect.

In August, he told the court his client had financial problems and that he could not proceed under such circumstances.
It was not immediately known why Motloung changed his mind about representing Maarohanye.

The trial continues on Tuesday. — Sapa