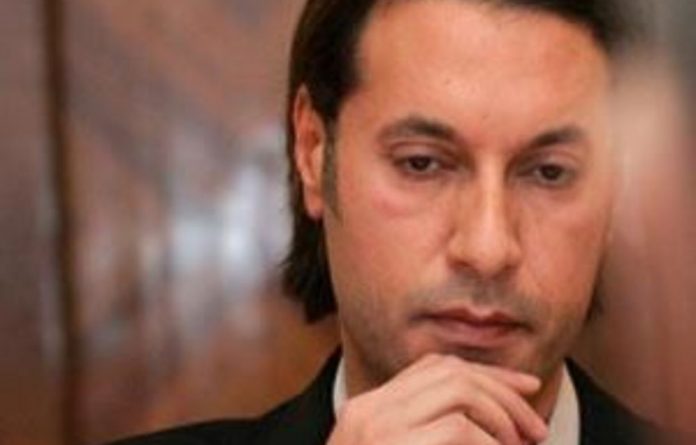 Celebratory bursts of gunfire and fireworks lit up the skies over Tripoli early on Thursday as word spread that Libyan government fighters had captured Muammar Gaddafi’s son Mo’tassim in Sirte.

The capture of the deposed leader’s national security adviser, and the first member of the Gaddafi family, is a big boost to Libya’s new rulers whose forces are still battling pro-Gaddafi fighters in his home town of Sirte.

National Transitional Council (NTC) officials said Mo’tassim was captured on Wednesday after he tried to escape the battle-torn city in a car with a family.

“He was arrested today in Sirte,” said Colonel Abdullah Naker, head of the Tripoli Revolutionary Councils. Other NTC sources said Mo’tassim was taken to Benghazi where he was held and questioned at the Boatneh military camp. He was uninjured but exhausted.

As news of the capture spread, hundreds of people gathered in the capital’s old city, singing, waving Libya’s new flag and shouting “God is greatest”.

Ships sounded their whistles in the harbour and car drivers honked horns, many with passengers hanging from the windows.

One man hoisted a small girl on his shoulders, as men nearby unleashed volleys of gunfire into the air, sending some fleeing into doorways. Local reports said several people injured by celebratory gunfire were taken to hospital.

“Look at this child,” the man said in English. “For her, there will be no memory of Gaddafi. He will be an old dream, just a bad dream. That is all.”

Hundreds of NTC fighters took to the streets in other cities and fired into the air after Arab television channels broadcast news of the arrest.

Gaddafi loyalists have fought for weeks in Sirte, one of two major towns where they still have footholds, two months after rebels seized Tripoli.

Sirte certain to fall
But NTC fighters have made significant advances in Sirte in recent days. On Wednesday, they said they were fighting pro-Gaddafi fighters in two small areas.

Many people who study Libya believe Mo’tassim belongs to a conservative camp — rooted in the military and security forces — which resisted his brother Saif al-Islam’s reform attempts.

A senior NTC military official told Reuters that Mo’tassim had cut his usually long hair to disguise himself.

Gaddafi and his most prominent son, Saif Al-Islam, have been on the run since the fall of Tripoli. Gaddafi is believed to be hiding somewhere far to the south in the vast Libyan desert.

His daughter Aisha, her brothers Hannibal and Mohammed, their mother Safi and several other family members fled to Algeria in August. Another son, Saadi, is in Niger.

Murder allegations
Libyan prosecutor Abdullah Banoun said on Wednesday the NTC had given approval for an investigation to be opened into Saadi over his role in the 2005 murder of a soccer player.

NTC fighters in Sirte on Wednesday walked up the same battle-scarred streets strewn with empty ammunition cases where they had engaged in fierce clashes a day before. Other fighters searched houses as a few civilians emerged from basements.

“More than 80% of Sirte is now under our control. Gaddafi’s men are still in parts of the Number Two and the ‘Dollar’ neighbourhoods,” said NTC commander Mustah Hamza.

Five corpses shown to a Reuters team wore civilian clothes and had their hands tied and gunshot wounds to the head.

Gaddafi’s colours still flying
Green flags, the banner of Gaddafi’s 42 years in power, still flew above many buildings in the neighbourhood, but all appeared quiet.

Medical workers at a hospital outside Sirte said four NTC fighters were killed and 43 were wounded on Wednesday.

The NTC has said it will start the process of rebuilding Libya as a democracy only after the capture of Sirte, a former fishing village transformed by Gaddafi into a showpiece for his rule, replete with lavish conference halls and hotels.

NTC chairperson Mustafa Abdel Jalil said on a visit to Sirte on Tuesday that it would take two more days to take the town.

But the remnants of Gaddafi’s forces, surrounded on three sides in Sirte and with their backs to the sea, have fought tenaciously, perhaps believing they face mistreatment or worse.

Back from the front line, NTC fighters jostled as one man tried to punch a wounded prisoner and others struggled to keep him off. The prisoner repeatedly shouted that he was a civilian.

Any male of fighting age still in Sirte was under suspicion.

“We were staying in a basement,” one man, Gamal Ammar, said alongside family members. “Some of us were hit. If we had died it would have been better. We had no water and no food. We couldn’t get out.” As NTC fighters drew near, he fell silent.– Reuters