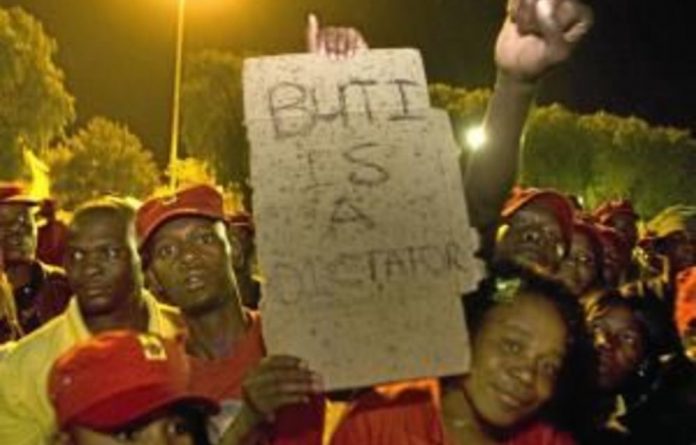 The Young Communist League (YCL) in KwaZulu-Natal is leading a mutiny against the league’s national secretary, Buti Manamela.

An anonymous document, titled: “Underhand Briefing to YCL Comrades”, lays out a plan to disrupt Manamela’s term of office, which was renewed only last December. Manamela can be removed only at the league’s next conference, in 2014.

KwaZulu-Natal’s challenge to Manamela signals a loss of support for the YCL leader, together with his mentor, South African Communist Party general secretary Blade Nzimande. A faction within the SACP complained in August that the party was trying to silence dissident members by purging them.

The Mail & Guardian has seen a copy of the document, which was distributed at the beginning of the month to young communists close to the plan. The main reasons for the revolt, according to the document, are Manamela’s alleged plan to remove the league’s national spokesperson, Mafika Mndebele, as well as his authoritarian leadership style.

“The catalyst for our fight — will be the current purging of the national spokesperson, comrade Mafika, by the national secretary. He [Mndebele] is asked to resign with immediate effect. Now that he fought towards national congress for Buti to return under difficult circumstances, this is how Buti thanks him today,” reads the document.

The document also claims that the national committee meeting of September 24 and 25 resolved to disband the provincial interim leadership which took over only in February.

The province’s former executive committee was disbanded by the national leadership a month before the congress in 2010.

It is understood that the leadership was purged because it supported Manamela’s former deputy, Khaye Nkwanyane, for the position of national secretary.

“There is a feeling from [the] national secretary that we have not done [the] work he expected in rebuilding the organisation and we are accused of failing to reign over [sic] the power of these Mahikeng comrades as they had regrouped to all districts and are running parallel [to the] YCL,” said the document reads.

Fight until the end
The young communists’ congress that re-elected Manamela for a third term was marred by violence and only police intervention ensured it went ahead.

The document continues: “The fact that they now want to dissolve us [the interim leadership] is a matter that we must fight right up to the bitter end. We cannot be the second casualties after the PEC [provincial executive committee].”

National spokesperson Mndebele denied being part of a group that planned to unseat Manamela, but said he “wouldn’t be surprised” if his name was being used as a rallying point. “It’s not the first time such allegations are being raised. My relationship with Buti is healthy,” said Mndebele.

He denied that the national committee had taken a decision to dissolve the province’s interim leadership.

“We’ve never raised dissatisfaction to the point where we reach a decision to dissolve. We might have had problems with implementation of programmes, that’s normal,” he said.

Mndebele’s supporters suspect that Manamela’s faction, which dominates the national committee, wants to disband the KwaZulu-Natal branch so that Mndebele is left with “no base to fight from”.

Mndebele, however, insisted that he didn’t need anyone to fight his battles. “Those who know Mafika Mndebele will tell you that I don’t take instructions from anyone,” he told the M&G.

“I will never be forced by an individual to resign. The national committee and the national working committee are the only structures that can make that decision.”

But, in spite of Mndebele’s dismissal of the anti-Manamela group in KwaZulu-Natal, YCL insiders said it had the potential to cause problems within the league.

“Considering what is happening in the youth league [which also disbanded its KwaZulu-Natal leadership] there is likely to be a huge retaliation.

Manamela did not respond to repeated attempts by the M&G to get comment.