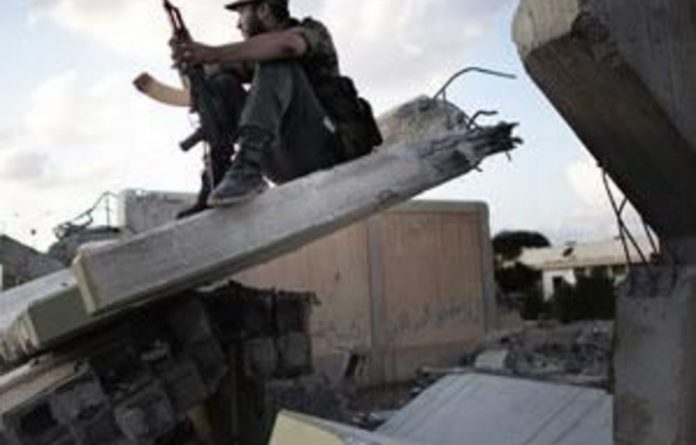 The sprawling, fortress-like compound known as Bab al-Aziziya has long been hated by Libyans who feared to even walk nearby during Gaddafi’s more than four decades in power and its capture was seen as a turning point in the civil war as revolutionaries overran the capital in late August.

Ahmad Ghargory, commander of a revolutionary brigade, said on Sunday that the area will be turned into a public park accessible to all Libyans.

“It’s the revolutionary decision to tear down this symbol of tyranny,” Ghargory said. “We were busy with the war, but now we have the space to do this.”

Pet market
Already, the courtyard in front of Gaddafi’s former house, which he used for many fiery speeches trying to rally supporters during the uprising, has been turned into a weekly pet market. Tripoli residents roam the premises as if at a museum, with vendors selling revolutionary flags and other souvenirs.

Libyans are eager to move on after decades of repression, even though fighting persists on two fronts and tensions between supporters of the former regime and revolutionary forces remain high — even in Tripoli. The continued instability has delayed efforts by the transitional leadership to move forward with efforts to hold elections and establish democracy.

The Bab al-Aziziya compound, surrounded by high walls lined with barbed wire, had been a mystery to most Libyans though it is one of the city’s largest landmarks. Many Tripoli residents said they wouldn’t go near it, fearing security guards on the compound’s high green walls would get suspicious and arrest or shoot them.

“I cannot explain these feelings,” Farouk Alzeni (25) said, standing against a backdrop of piles of rubble. “I have never touched this wall because of this place’s heavy security.”

The compound was a main target for Nato airstrikes during the months leading to Gaddafi’s ouster in late August.

Jubilant rampage
Fighters forced their way into the area on August 23 during the battle for the capital, jubilantly rampaging through the remnants of barracks, personal living quarters and offices seen as the most defining symbol of Gaddafi’s nearly 42-year rule.

Gaddafi’s residence, now gutted and covered with graffiti, was also targeted in a United States bombing raid in April 1986, after Washington held Libya responsible for a blast at a Berlin disco that killed two US servicemen. A sculpture of a clenched fist crushing a US fighter jet that had been erected after the strike has been removed.

Gaddafi entertained guests in a Bedouin-style tent pitched near two tennis courts about 200metres from the family home.

“All the bad things that happened, happened inside these walls. And he kept his mercenaries and tortured people inside these walls,” said Tarek Saleh, a 25-year-old revolutionary. “Before we were never able to enter this site, and we’re tearing these walls down so we don’t have to remember those dark days.”

Sirte happens
Revolutionary forces have squeezed Gaddafi loyalists into one main district in his hometown of Sirte after weeks of fighting, but some said fears of friendly fire as well as a lack of coordination and communications were slowing their advance. Fighters from the eastern city of Benghazi and Misrata to the west were trying to reorganise themselves to solve that problem.

“We have them cornered in a 900m by 700m area, but the fighting is difficult because we are worried about firing on our own forces, they are mixed together,” Benghazi field commander Khaled al-Magrabi said Sunday.

Commanders said they have agreed to divide the remaining loyalist area between them to prevent confusion.

Libyan fighters also faced discord over the looting of buildings, including the airport and houses in Sirte, on the coast 400km southeast of Tripoli. Trucks were seen carting off tractors, industrial generators and heavy machinery on the road from Sirte to nearby Misrata, which was under siege by Gaddafi forces for months and saw some of the fiercest fighting of the war.

Looting continues
Smaller pickups were loaded with rugs, freezers, refrigerators, furniture and other household goods, apparently taken by civilians and fighters to be used in their homes or resold.

The looting was an indication that reconciliation and unity may be difficult to achieve in post-Gaddafi Libya.

Commanders tried to rein in looting by ordering fighters to refrain from entering private homes and to detain anybody not authorised to be in the area. Benghazi fighters arrested three men for looting on Saturday.

Revolutionary forces also distributed fliers at checkpoints leading into the city that read, “Dear Muslims, avoid God’s wrath. Do not steal from people’s homes, their cars, or take their personal possessions.”

An official with revolutionary forces there, Abdullah Kenshil, said they captured the airport in Bani Walid on Sunday, but further advance was stalled by heavy shelling from Gaddafi’s forces elsewhere. — Sapa-AP