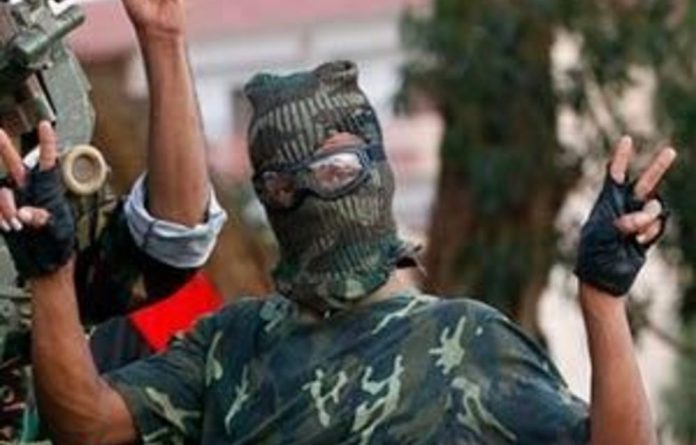 Nineteen South Africans were contracted to help former Libyan leader Muammar Gaddafi escape to Niger and two of them died in the process, the Rapport newspaper reported on Sunday.

However, the Department of International Relations and Cooperation has distanced itself from the newspaper report, saying there was no way of verifying it “independently”.

“As far as we are concerned, they remain rumours for now. They [the mercenaries] wouldn’t have gone through official channels so we’ve got no way of independently verifying these allegations,” said spokesperson Clayson Monyela.

In an interview with Rapport, one of the men, Danie Odendaal, who was being treated in a North African hospital, told the newspaper that the South Africans had been hired by a number of private security companies.

He described their efforts to evacuate Gaddafi from his home town of Sirte in Libya as a “massive failure”.

Odendaal and four other South Africans were apparently in a Jeep which raced out of Sirte in the Gaddafi convoy.

He told the newspaper, “We all believed they wanted to get him out [of Libya]” but the Nato-forces opened fire on the convoy from the air.

Libyan soldiers then descended on the convoy. Gaddafi and a couple of his minders fled into a storm water drain where he was later found. The mercenaries scattered.

Odendaal told Rapport that the Libyans were mindful not to shoot the foreigners and helped him to flee.

No trial
President Jacob Zuma has said on Friday that Gaddafi should not have been killed but brought before the International Criminal Court (ICC) to answer to allegations of torturing and killing civilians and rebel forces.

There was a trend across the world that leaders were not being given the opportunity of a trial, Zuma said.

“Given there was a warrant of arrest against Gaddafi, those who found him should have arrested him and handed him to the ICC,” he said.

“We expected him to be captured, given that everybody knew there was a warrant of arrest issued against him.”

Autopsy
Libya’s new leaders will on Sunday declare liberation in the wake of Gaddafi’s death, paving the way for the formation of an interim government followed by the first free vote in 42 years.

The long-awaited declaration was being overshadowed by raging controversy over the circumstances of Gaddafi’s killing after he was captured alive during the fall of his hometown Sirte with Britain on Sunday saying the incident had “stained” the National Transitional Council (NTC).

Senior NTC officials said an autopsy has been carried out on Gaddafi’s body, which would be handed to his relatives after consulting with them on the location of his burial.

The new regime has said the liberation declaration would be made later on Sunday in the eastern city of Benghazi, cradle of the revolt that broke out in February and, backed later by a Nato air war, saw Tripoli overrun in August.

The NTC had promised to proclaim the country’s liberation after Sirte, Gaddafi’s last bastion of support, fell and the ousted despot was controversially killed on Thursday.

Under the NTC’s roadmap, an interim government would be formed within one month of the declaration, followed within eight months by elections for a constitutional assembly — the first democratic vote in Libya since Gaddafi seized power in a coup 42 years ago.

Parliamentary and presidential elections would be held within a year after that.

“We are dealing with the subject with transparency,” Abdel Jalil told Al-Jazeera television.

Controversy
Disquiet has grown internationally over how Gaddafi met his end after NTC fighters hauled him out of a culvert where he was hiding following Nato air strikes on the convoy in which he had been trying to flee his falling hometown.

Mobile phone videos show him still alive at that point.

Subsequent footage shows a now-bloodied but walking Gaddafi being hustled through a frenzied crowd before he disappears in the crush and the crackle of gunfire can be heard.

NTC leaders are adamant he was shot in the head when he was caught “in crossfire” between his supporters and new regime fighters soon after his capture.

Interim prime minister Mahmud Jibril told the BBC’s Hardtalk programme that he would rather Gaddafi had survived.

“To be honest with you at the personal level I wish he was alive. I want to know why he did this to the Libyan people,” he said. “I wish I were his prosecutor in his trial.”

Jibril added it would be “absolutely OK” to carry out a full investigation under international supervision into the killing, as long as Islamic burial rules were respected.

In London, Britain’s new Defence Secretary Philip Hammond said the reputation of Libya’s new leaders had been “stained” by the killing.

“The fledgling Libyan government will understand that its reputation in the international community is a little bit stained by what happened,” he said.

On display
Gaddafi’s body has been stored in a vegetable market freezer in the eastern city of Misrata, drawing large crowds wanting to view and take pictures of the remains of the despot who ruled Libya with an iron fist for decades.

The judge in charge of organising the autopsy confirmed that Gaddafi’s body had been examined, adding he was waiting for a report on the causes of death.

“The autopsy was completed at 10:00am but the report has not been written yet so I haven’t been informed yet of the causes of death,” said Abdel Salam Baayu.

Another NTC official, Ahmed Jibril, told AFP that his body would be handed to his relatives.

“The decision has been taken to hand him over to his extended family because none of his immediate family are present at this moment,” Jibril said in Tripoli.

United Nations human rights chief Navi Pillay called for an investigation into the killing, as did Claudio Cordone, senior director at Amnesty International, who said that if he “was killed after his capture, it would constitute a war crime and those responsible should be brought to justice.”

Gaddafi’s widow, Safia, who fled to Algeria in August, has called on the United Nations to investigate the circumstances of her husband’s death, Syria-based Arrai television said.

Senussi is wanted by the International Criminal Court (ICC) on charges of “crimes against humanity.” The court levelled the same charges against Gaddafi and his son and long-time heir apparent Seif al-Islam.

Seif al-Islam too remains at large. NTC officials said he too may have fled to Niger. — Sapa, AFP