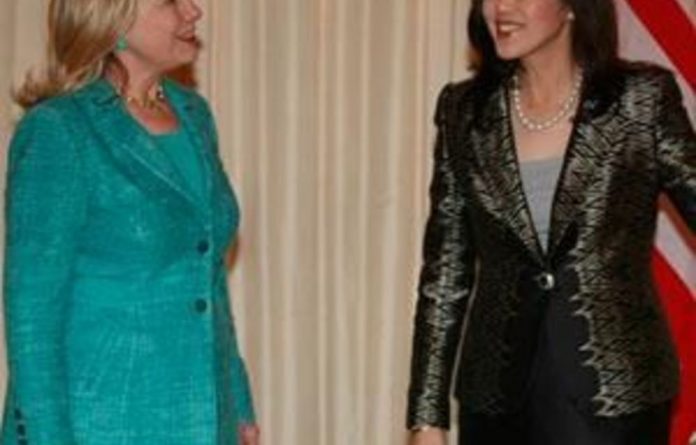 United States Secretary of State Hillary Clinton on Wednesday urged flood-stricken Thailand to overcome political infighting during the crisis as she announced immediate assistance for the historic ally.

Clinton said that a US warship, the USS Lassen, had docked and that its crew would begin work on pressing priorities including repairing the city’s second largest airport, Don Mueang and restoring police stations.

“We are proud to stand with you now, in this time of challenge, as you contend with the worst floods of your nation’s history,” Clinton told a joint news conference in Bangkok with Prime Minister Yingluck Shinawatra.

Clinton stood firmly behind Yingluck, who is facing intense pressure after only three months in office as she confronts the kingdom’s worst flooding in decades which has killed at least 562 people.

Yingluck is the sister of former prime minister Thaksin Shinawatra, a deeply divisive figure in Thailand who was ousted in a 2006 military coup and she has come under pressure from critics for her handling of the flooding disaster.

“These floods pose an early and serious challenge to the new Thai government and the hard-won peace that the Thai people achieved after the political violence you have endured in recent years,” Clinton said.

“We encourage the government to move forward with a political reconciliation process, which is critical to Thailand’s long-term stability and security. As it does, it can count on support from the [US],” Clinton said.

Yingluck, speaking alongside Clinton, said that her government “attaches a high priority to promoting political reconciliation and social cohesion”.

President Barack Obama’s administration has been looking to do more with historic allies in Asia as part of a growing focus on the continent.

Internal struggles
Thailand is the oldest US ally in Asia, with a relationship dating back a century and a half, but US policymakers have been worried that the kingdom has become too absorbed and distracted by its internal struggles.

A State Department official said that the US was also concerned that Thailand’s floods could spur instability around the region as the kingdom is a major supplier of rice, a food staple in Asia.

Clinton said that the crew of the USS Lassen, which is based in Japan, would begin assessment of Thailand’s historic sites to look for ways to preserve or restore them from the floods that have swept through the country.

The US will commit up to $10-million in aid after the USS Lassen‘s teams assess needs, a process that could take between one week and 10 days, according to an official travelling with Clinton.

US officials said in October that a number of ships including the USS George Washington turned away from Thailand after the military did not give the green light for help, although the country provided other aid.

Security alliance
Clinton hastily added on the visit to Thailand after Yingluck cancelled a visit to Hawaii for a weekend summit of the Asia Pacific Economic Cooperation forum so she could focus on the crisis at home.

Clinton on Wednesday visited the Philippines to mark the 60th anniversary of a security alliance between the two countries, a trip that came amid high tension between Manila and Beijing over a territorial dispute.

In a symbolic show of solidarity, Clinton boarded a visiting US destroyer, the USS Fitzgerald and signed a joint statement with the Philippines in which the two countries pledged to defend “freedom of navigation”.

The Philippines and Vietnam have accused China of increasingly aggressive actions in the potentially resource-rich South China Sea, including intimidation of fishermen and oil exploration teams. — AFP